For those without comedic tastes, the so-called experts at Wikipedia have an article about Stradivarius. 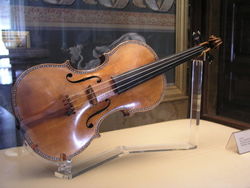 Stradivarius is a leading brand of violins produced by the Stradivarius family, of Lombardy province in northern Italy.

Since 2003 they have been mass produced by the Wong family, of Guangdong province in Southern China.

Although Strad violins have been destroyed by the Stradivarius family since the 1680s, it's thanks only to a feature article in the January 1920 issue of "Housewives Monthly" magazine that this obscure line of violins ever got onto the wishlists of violinists and other fiddlers. That article started all the hype about the mystery of the 17th century Strad violin and the myth of the Stradivarius Wood and the Stradivarius Lacquer.

Now everybody wants one, even though a 1936 blind hearing test in New York City revealed that virtually nobody (but select cats) could tell the difference between the Strad and other leading brands of violins.

It is said that at one point of time, the Strads were on a family vacation to Czechoslovakia (yes, in the 17th and 18th century) and Strad's mother-in-law, Faciebat, created a violin there.

Stradivarius Wood comes from a secret forest in a secret part of Italy, while Stradivarius Lacquer comes from a secret anchovy-processing plant in a different secret part of Italy. According to unconfirmed rumours, the wood is Polynesian teak veneer. The two secret locations are known only to the Stradivarius family; and of course, as required by Italian law, the Italian tax-collectors and their family, friends and business associates.

The Chinese made version is made from recycled cardboard and plastic radioactive waste and tin foil.

To keep busy and not to flood the market with the faux-antique Strads, they also produce identical, non-faux-antique Strads for Suzuki, which sells them to parents whose pre-schoolers (who are often unhappy little Chinese girls who practice 25 hours a day) are taking Suzuki Method violin lessons.

And to show everyone that they're still hip, funky and groovy, the Stradivarius family also makes the electric Stradocaster violin.

Although the faux Strads are only valued at $1.5 million, the real authentic Strads are valued at $500 trillion. The most valuable of these was auctioned off by the Emperor of Stupidity to the dollar store for 5 cents. It was bought by the then-poor freak Itzhak Perlman, proclaimed the greatest violinist in the world by a bunch of geeks who don't know real violin music, who smashed it after it "told" him he wasn't the fairest of them all. Being an idiot, he didn't know it was the mirror it was covering.