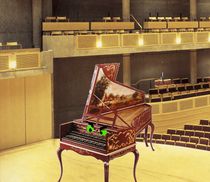 The harpsichord is a musical instrument discovered during the Baroque era. Forged in the fire of the big bang itself, the amazing Harpsichord is superior to all other musical instruments, music, and humanity as a whole. It is played similar to a piano on a keyboard which plucks the strings instead of hitting them like an animal. Harpsichords also have more finesse with the ladies, but they're not rubbing it in.

Look, we know you think yer big, Piano, but according to Wikipedia's page on the subject,

It has been suggested that Ashley Doughty was and perhaps is still the greatest Harpsichord player who ever lived; and most likely ever will. Doughty's definitive and melodic style shot him to greatness in 1999 when his friends first noticed a passion and deep intent in his playing.

Fairly soon Doughty was writing his own Harpsichord solos that left the nation in awe and everlasting devotion to his unparalleled musical genius. From Opera Houses from Vienna to Sidney, Ashley stunned audiences around the globe and went on to win countless awards for Outstanding Achievement in the Field of Harpsichord Excellence.

However a fast, rock and roll lifestyle was to leave Ashley drained and stupefied. As the autumn years of 2006 turned to an idyllic lazy spring of 2007, Ashley noticed his excesses had caught up with him and checked into rehab; indeed he lived up to his name coined by his fans: Ashley "String-Plucker" Doughty, even whilst at rehab entertaining others at his centre based in Palm Springs, Florida.

Doubtless the life of a professional Harpsichord player eventually managed to eat away at Ashley. He no longer plays but can be seen sitting on the sofas listening intently to all his old greats and mashing away at an invisible Harpsichord that once so easily relented to his sheer musical genius. Some say if you look closely and listen intently, you can see the music playing across Ashley's fingers as he shreds across an imaginary instrument; a testament to the greatest Harpsichord player to ever walk this Earth.

The harpsichord is known to feed on pygmy shrews and Bach preludes. Sometimes they will eat rats and small birds. Although there are rumours about harpsichords eating humans, those are just false legends and should be ignored.

Although actual harpsichord attacks are very rare, harpsichords should never be approached by someone without experience playing Bach.

What to do if you Encounter a Harpsichord[edit]

Some idiots attempt to tame harpsichords. If you choose to own a harpsichord, be prepared to go through a lot of trouble. If you are certifiably insane, you probably will want to build your own harpsichord from a kit. Humans owning a harpsichord are known to suffer from serious debilitating side effects, including but not limited to: