Since the European settlement in Africa, dozens of musical instruments have been created, from tambourine (no matter what the spelling is) to dodgeridoo (again, the spelling is not important). Above all these instruments, notable people only choose some notable instruments, such as "The Big Five". Such as, drums, bass, guitars, keyboards and microphones. Well, the latter one is not really an instrument, but vocalists, who desperately want to be "musicians", consider a microphone an instrument. It really doesn't matter which instrument you choose, basically. However, anyone can learn how to play drums! Even a three-year old child can play drum with his/her spoons and his/her father's head. Anyone can also sing! I can sing, you can sing, and maybe your grandma can sing, there is no challenge. It is also easy to play keyboard, because you just have to randomly select a note and apply it on the keyboard. Now the only options left are guitar and bass. I don't know why I chose guitar.

Why should you play guitar?[edit] 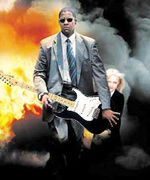 After playing, burn it! Then you'll be famous.

You must play guitar, because:

Why shouldn't you play guitar?[edit]