~ Feeder on Just a day 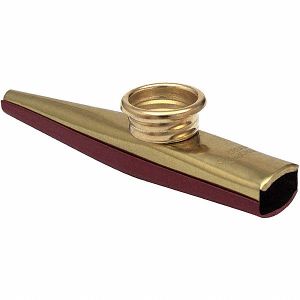 One thing seems abundantly clear: a kazoo is NOT a whistle. Much controversy was aroused by the Kazoo-Whistle War of 1812, which was fought after Charles Darwin argued that kazoos evolved from whistles. This conflict was cut short by the invention of the bagpipe whereupon both parties immediately dropped what they were doing and started the Hundred Years' War to rid the world of the bagpipe.

In 2002 however, a group of scientists from northern Scotland found out that the kazoo had actually evolved from the tenor Saxophone. Although a few american priests started some smaller riots, no humans were killed because of the disagreements. Now it is widely seen as a fact by both scientists and less intelligent citizens that kazoos have evolved from the tenor saxophone.

Evidence has emerged recently suggesting that the kazoo may be linked to an ancient instrument known as a Mongolian Death Stick, which according to local lore, was used to summon demons and dune worms. In fact, Kazoologists are so sure of a possible link, most east-Asian countries have banned the importing, creation or use of the kazoo, just to be safe.

Many have died in an effort to contain the mystical power within the kazoo. Al Addin (no relation to Aladdin) was the first to successfully harness this power, but his life was brought to an unfortunate end when he suddenly felt the icy grip of death upon him. No one since Al has dared to accomplish his feat; many have turned to master the mystical powers of the Rubik's Cube instead.

Recipe for making a Kazoo[edit]

Instructions: Stir in a pot for 12 minutes on medium heat. Simmer, and serve with fresh coriander.