“Man who push piano down mineshaft get A flat minor.”

~ Piano Tuner on his job

“Come here child, I'll teach you how to finger A minor!” 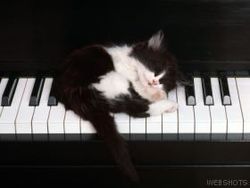 Animals playing soulful piano are rarely seen outside of Uncyclopedia. You're lucky to see this rare photo. You are LUCKY.

The piano or "devils-box" (Italian piano-forte (literally "40 pianos")) is a deadly, radioactive Weapon of Mass Destruction, often referred to as the "Big Keyboard". They usually run on either electricity, magic, or legs. Pianos are deployed from very tall buildings, whereupon they are propelled by gravity (or, if the target is of a higher elevation than the building, rockets) onto the target's head, usually resulting in instant death. These weapons of mass destruction are used by the class of combatants known as pianists, a subspecies of keyboardist. However, it is now known that the keyboardist is a sub species of the pianist due to its time travelling capabilities.

Historians have found that the first piano was crafted out of Mammoth tusk (12,983 B.C.) by the famous craftsman Jay Bush. (There is a common misconception that Richard Nixon invented the first piano.) Bush's piano was named "The Grande Piano" leading some to believe that Jay Bush is actually native to Mexico. This historic piano consisted of one single white key, which angered composers of the time who could only compose for that one tone. The result was particularly dull, especially during piano recitals. It wasn't until the first piano was dropped that the cracks between the keys appeared and composers could suddenly write for multiple different pitches.

Recent photographic evidence however has created alternate theories suggesting that the piano was in fact invented in 1893 by Louis Pasteur. As the first instrument to ever come into being, people marveled in its novelty. Instruments such as the harp, the cowbell, the harpsichord(dirty thing), the harmonica, the tuba, and all drums, were all modeled after the piano.

In 1895, Pasteur patented the piano, but these patents were soon destroyed by Harpo Marx, the inventor of the harpsichord, so he could build his cheap copy of the piano. Since then, as there are no existing patents on the instrument, it has been reproduced billions of times by brands such as Steinway, Yamaha and McDonalds.

Several early piano makers employed popular musicians of the day to create sonatas and concertos for "concert piano". Concerts at which these pieces were performed were at first well attended, but quickly led to the downfall of classical music, when people realized that no musician on earth could make a set of ivory cubes inlaid with varying numbers of ebony dots (Piano-Fifteen) sound any good at all. The rise of popular music began in an effort to maximize the impact of this momentous realization, although some argue that all those shenanigans on stage were really just meant to pick up girls, or boys if that's the way you lean.

It was used in Medieval Times as weapon of mass destruction to melt the enemies' eardrums. It caused mental delusions and made you paralyzed. King George the 80 was killed by his son when he played Mary has a devil cow.

More justification for killing elephants and rare trees was needed, and pianos therefore became ever more elaborate. Eventually other ingredients were added, and Piano-Twenty-Two was born, which was made entirely from ivory and ebony triangles, held together with cabbage. Later, further elements were added, including piano wire, which was invented 500 years earlier by a man who wanted something with which to garotte people.

By 1936 many British pianos were kept in public houses in the east end of London, where they were unfortunately vulnerable to damage during the Blitz on London's docks and factories that formed the second act of World War II. Following the outbreak of peace in 1945, a section of the merchant fleet was converted to become Piano Ferries which discreetly redistributed pianos from defeated Germany, Belgium, and parts of occupied France to damaged districts of London. One of the main berths was renamed the Surrey Keys due to an accident with a dockside crane. After 1951, when local musical demands had been satisfied, the shipping-line began to transport cars, trucks and passengers.

The Breakthrough of the Piano-Forty[edit]

Just as the elephants and rare trees were beginning to run out, the Piano-Forty was made. By some astounding coincidence, the previously composed concertos and sonatas sounded really quite good on this particular piano.

As there was no real need to justify killing elephants and rare trees anymore, all subsequent pianos were modelled on the Piano-Forty, and refugees and wind players were often used in place of the (by now very rare) ivory and ebony.

The Downfall of the Piano[edit] 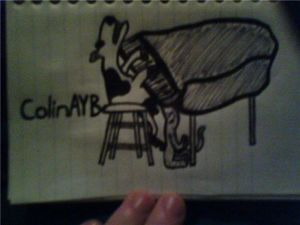 A proliferation of Mid-20th Century drawings like this contributed greatly to the downfall of the piano.

Jerry Lee Lewis tried and failed miserably to bring back piano music after the White Man tried to replace the Piano in Blues with Electric Guitars. Mr. Lewis almost succeeded with his attempt to revive the Piano-forty but failed because the British had mistakenly assumed he married his 13-year old cousin. When he returned to America, Jerry Lewis (Jerry's "other" cousin) made being a douche bag popular with his jokes against Jerry Lee Lewis.

While some people look at Jerry Lee Lewis as the downfall of the piano, historians can now pinpoint the exact time the piano lost its appeal with the birth of the Matthew Albright (Matt-hue All-Bright), which is Latin for "spends beyond his means, and is destined to be the father of five red headed children who drives them to soccer practice in a 1996 Dodge Stratus". Many people have speculated over the origins of the Matthew Albright. If asked, he will tell you it was an immaculate conception, but in fact the Matthew Albright was born and raised on the mean streets of Martinsburg, West Virginia, on the playground is where he spent most of his days. Further proof that you can take the fancy lad out of West Virginia, but you can’t take the West Virginia out of the Fancy Lad.

Many sweaters later, the Matthew Albright now resides in Hagerstown, MD (Martinsburg’s retarded cousin) where he drives cars he can’t afford, racks up 700 electricity bills and reads many a Harry Potter novel. Should society stop this hideously flamboyant creature from destroying the world of music with his sub par sight reading skills and lack of work ethic? Probably, but sadly enough they won’t because, much like the Matthew Albright, they lack the follow through to do so.

The Present and Future of the Piano[edit]

Though a popular instrument in modern music, piano players are frequently bitter and twisted individuals as no one ever sleeps with the piano player in a band. Oh sure, they'll sleep with the brain dead drummer or guitarist, even the smelly overweight bassist but not the guy who can actually read music, play the instrument properly and knows how to fucking wash himself!

As reported by UnNews, in late 2007 the United Nations adopted the "falling piano" as hazard warning sign in areas with possibility of piano attacks. There is, however, doubt about the intuitivity (yes, that's a word) of the warning sign; some consider it still too vague or unclear to express the grave danger of such a situation to an unprepared belowstander. Russian Prime Minister Viktor Zubkov has come out strongly against the signs, saying, "If a piano falls on you, then that's that. It's destiny. It's not that God hates you. He actually likes you, which is why he wants your death to be comical."

In 2099 the "Smart Piano" will be released under Sony and will be capable of playing Jerry Lee Lewis songs.

As the piano has grown more and more elaborate, a few different layouts for the keys have emerged. The original layout was set by a still unbeknownst man who arranged them in successive order, A through G, Sharps (#) and Flats (b); such that the piano is arranged a little like a musical staff. This layout is referred to as Qwerty, after the rare bird.

A few hundred years later, Czech composer Antonin Dvorak created a new style of keyboard. He proposed that the most commonly used notes be placed nearby one another so that one's hands need not stray too far from what he liked to call the "Home Octave", being the natural postition of one's hands when playing.

Music played on only the black notes of a piano sound vaguely oriental. This is due to the method of coloring the black keys with the tears and bile of Chinese women, combined in a silver vat and boiling this mixture. If the tears and bile of African American women is used instead, the keys will still gain a black color but will produce an inferior sound with a gangsta quality.

Sometimes when an abo plays a piano, it instantly becomes an evil piano. Plus if it's white it turns black and you know what they say about that; once you go black you never go back.

Throughout time many innovative thinkers (or Europeans as they are called in Kansas) had devised schemes to make compositions on randomly smashed notes on a keyboard or piano, challenging the following generations to cause lots of explosions. Surely enough, several succeeded, including:

It is very difficult to succeed as a pianist when there is so much competition in the field. The pressure of this competition has led to a goodly number of pianists giving up on attaining the necessary standard to succeed in terms of skill and insight alone, settling instead for becoming average pianists.

As average pianists, many people decide to distinguish themselves in new ways. Some approaches include performing semi-comical appropriations, playing cool jazz in abandoned bars whilst wearing three hats or, the most popular approach, sitting in front of the keyboard for as long as possible, staring at the ceiling, and doing nothing. The latter method has been proven to be very successful, spawning innumerable grateful reviews, because the average pianist mercifully delays revealing their incompetence for as long as possible.

Occasionally, average pianists actually think they are very special and insightful. This is particularly amusing to watch.

One of the philosophical challenges of the 21st century engages with the title "average pianist", drawing attention to the subjective nature of the term "average". Ensuing projections estimate that, within twenty years, the "average" standard will have devolved so much that playing the piano will have to be combined with other activities; essentially, to be reinforced or die. To this end, Steinway is currently designing a piano with a screen on the music stand and, another optional feature, keys that light up. These keys are then to be hit by the average pianist, playing a figurative game of whack-a-mole. Given the right marketing, this innovation is said to have enormous financial and cultural potential, especially given the ability of Steinway to draw all the pretentious prigs into one high-paying, insatiable audience.