For those without comedic tastes, the so-called experts at Wikipedia have an article about 1 (number).

Long thought of as being the loneliest number, One in fact has a healthy, monogamous relationship (naturally) with his long-term girlfriend 2. In all their years together, One has never had an affair.

One achieves this iron self-control over his sexuality by periodically seeking out hookers and strangling them, thus sublimating his desire for sexual variety with the aid of violence. 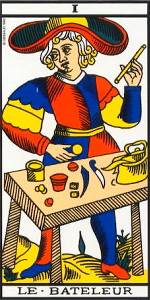 The Magician, or Magus is almost always depicted as a man with long hair.

"Substituting violence for sex is the key to romantic happiness," says One, nodding sagely to the youth who came to his house seeking his wisdom whilst eating One's food and rummaging through One's things, before picking up a coatstand and buggering the young boy to death with the large end.

"You see? There'll be no matrimonial disputes in this house, not while I can maintain my psychopathic zeal for the destruction of innocent young boys," smiled One, as he wiped the young lad's blood from his brow and proceeded to drag the battered corpse into the courtyard of his elegant but discreetly located Victorian house.

A glint in his eye and a spring in his step, he turned to Two; "Be a love, dear, and get my spade". Skipping to the toolshed, Two returned with the biggest spade her dainty hands could carry, and because their love for each other was so strong, they buried that young chap under the plum tree, and walked into the sunset, their hands holding each other's digits.

Many distinguished numerologists classify 1 as being the loneliest FUCKING number, but in recent years a more popular theory has arisen that classifies 3 as being the loneliest (thus disproving the claim that 2 can be as bad as one and is the loneliest number since the number one). This assertion was first made by Dr. Jerry Springer, MD, after the dark past of 3 was unearthed. Thanks to the tireless work of countless numerologists, we now know that the childhood of 3 was marked by physical and sexual abuse, and an intense psychological dependency on illegal drugs.

Although unknown to most, 1 is divisible by 1.

It has been argued by some numerologists that the first number is actually 0, but this theory was discredited after Phylicia Rashad proved in 1961 that zero is not actually a number, but is in fact just a circle. The implications of this discovery on mathematics were profound. For example, scientists and mathematicians now treat 1, 10 and 100 as the same numbers. For her discovery Rashad won the Nobel Prize in Mathematics.

Look up 1 (number) in Undictionary, the twisted dictionary

Field studies indicate that 1 may be toxic to pregnant women and nursing mothers. Exposure to 1 should also be avoided if you have a George Bush allergy or dislike the taste of Orange shavings. Side effects may include cottonmouth, nosebleeds and chronic diarrhea. The LD50 of 1 can range from 7 µg/kg (rare trimethylated 1, from The Moon), to 3000 kg/kg (ordinary garden variety 1 dihydride, from Belgium)

1 + 1 is 3 for extremely large values of 1. how many times does 1 go into 0=as many times as it wants!!! 1 is also confused with his twin 0.9999999... although many mathematicians have attempted to distinguish between the two, the numerical cannibalism act of '87 ensured that once 0.9999999... is caught, he/she will be swiftly plumped, stuffed and roasted and eaten by all numbers within the inequality: 0< (no one likes negatives).