For those without comedic tastes, the so-called experts at Wikipedia have an article about One Ring.
“Why did those silly dudes decide to promenade all the way into Mordor when they could have just traveled back in time and kill Sauron before he had the chance to forge the One Ring, like push him into that volcano or something? That would be like, woah, awesome! They should make a movie based upon that storyline...”

~ Ted "Theodore" Logan on Lord of the Rings

“Ahah! And with this One Ring, science will rule the world!”

“Are you kidding Gandalf? Why didn't you tell us you had goddamned giant eagles?!” 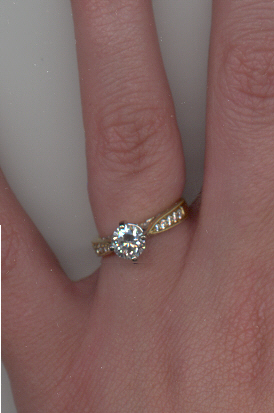 A picture of someone wearing One Ring. Note that if this person had been wearing a different number of rings, then it would not be One Ring.

One Ring is more than zero rings, but less than two. It is also equivalent to 1.0000 rings, but only if this number has not been rounded. Also found in The Lord of the Rings until it was destroyed and became no rings. 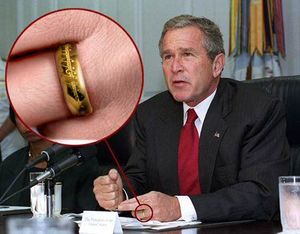 Dubya wearing a replica of the real Ruling Ring. The real thing would of course have have turned him invisible.

Legend has it that there is ONE RING TO RULE THEM ALL. That one ring is considered by historians to be the Wedding Ring. This conveniently corresponds to the ring's ability to bind people.

“The ring, didju get the ring?”

Many conspirators, philosophers, and people who like to watch violent movies believe very strongly that the One Ring actually belongs to Neo. Or that it survived its fall into lava and is now living a peaceful life in Guam.

The one ring had the power to make a person invisible when worn on their finger, toe, or genitalia. This is possibly because the wearer was removed from the world of the normal and instead placed into an alternate dimension filled with water, blurring everything outrageously. It also gave the person who used to own it the power to scare the shit out of the current bearer.

The One Ring was responsible for giving ninja Real Ultimate Power. The ninjas received the Ring after Elvis defeated The Burger King in Atlantis and gave it to them to keep it safe. While most don't know if the ninja still have the Ring, the ability of Real Ultimate Power was passed down from the first bearer.