“He was more than a servant.”

“He was my first cousin.”

“I hate him like nothing has been hated by a dwarf before!”

Gothmog was an Orc warlord in the services of Sauron. He was the leader of the Minas Tirith siege during the War of the Ring. Also, he was second-in-command of Sauron's army (Witch-king being first), due to his bravery and beauty. Gothmog suffered from a rare disease, probably elephantiasis. 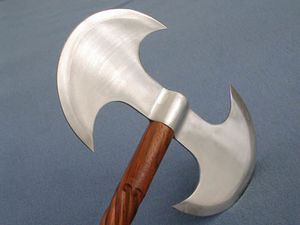 The present Gothmog got in his first birthday

Gothmog was the son of Jabba the Hutt and your mom. He was born in Mordor, unknown date. He grew up with love and care, playing with other orcs and trolls. Nobody mocked him for his face. Only one did, an orc called Grngksd. The next morning Grngksd was found dead in the toilet. Jabba was so proud of him and he recommended him to play in the Star wars. However, George Lucas refused, saying "take your son to WoW or something".

Disappointed, Gothmog got a job as a babysitter and later as a cashier at KFC. There, he met Sauron, who was searching for scary creatures to enlist his army. He sensed Gothmog's talent and offered him the position of lieutenant. Gothmog accepted immediately. He resigned and punched his boss.

Lord of the Rings career[edit]

Gothmog was taught the art of war by Lord Sauron himself. He proved an excellent pupil, as he became a skilled warrior and leader. Sauron was pleased with his progress and soon assigned him an important task: steal Galadriel's stamp collection. Gothmog managed to take it and that made Elrond extremely angry.

When the War of the Ring broke out, Gothmog was commisioned to attack Minas Tirith, capital city of Gondor. Assisted by the Nazgul, he easily took Osgiliath, which was defended by Faramir and some worthless knights. All Gondorians incarcerated in Minas Tirith, waiting for the enemy. Gothmog though didn't hurry and regrouped his army. Denethor, the stupid Steward of Gondor, intervened and created a real mess. He ordered an assault that ended in slaughter. Gothmog was laughing on Denethor's decision. "If every human was like him, I would be the ruler of Middle-Earth", he wrote in his diary.

Gothmog attacked with all his forces, making Denethor crying like a toddler. Gandalf and Gondorians fought bravely, dut they were outnumbered. Gothmog enjoyed a glass of fine champagne, while watching Minas Tirith burning. "Aaah... better than cinema", he said. But nothing was over yet. Suddenly, a large army of Rohirrim attacked, lead by King Theoden. The orcs had their asses kicked. Literally. Gothmog himself was killed, after losing his left testicle. Poor Gothmog.

For those without comedic tastes, the so-called experts at Wikipedia have an article about Gothmog (Third Age).

Gothmog wrote poetry since he was a young orcboy. He prefered haikus and he wrote lots of these. Saruman liked Gothmog's haikus and called them ferocious literature. Here are a few:

By my new sword
All enemies die
What a wonderful world!

A bleeding elf kneeling
For mercy asking
His head I took

The Lord of the Rings
Retrieved from "http://en.uncyclopedia.co/w/index.php?title=Gothmog&oldid=5920698"
Categories: