From Uncyclopedia, the content-free encyclopedia
(Redirected from Frodo Baggins)
Jump to navigation Jump to search 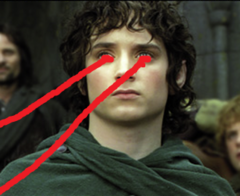 Frodo Baggins is a minor deity of the Uncyclopedia poly-atheism cult and is not to be confused with the Lord of the Rings character. He is a Dutch mink farmer with laser beam eyes and represents the preserving of bad articles from deletion and is also a sex god. He has around 13,000 worshipers in the universe and is one of Oscar Wilde's gay lovers.

3 months after the creation of Uncyclopedia by Oscar Wilde, there was the ancient plague of Pennywise the Clown who repeatedly wrote one-liners about how he is the true god of Uncyclopedia and stuff that nobody cares about, such as "List of sofas produced in 1997", "Kitten AIDS" and "HowTo:Suck Chuck Norris' cock". All of these articles were deleted in less than 30 seconds, but he just kept creating them, so he was smited by Oscar Wilde using his banhammer. So he wrote HTBFANJS and included a picture of Pennywise in it, as well as saying that:

In order to prove he is wrong, the superior of Oscar Wilde, Chronarion, created a Dutch mink farmer known as Frodo Baggins, who was capable of shooting laser beam eyes. He has the appearance of Frodo Baggins from The Lord of the Rings, but he is a completely different person and speaks in Dutch. He also has dinosaur genes, is capable of transforming into a dinosaur that is invincible, and capable of shooting laser beam eyes.

He later married Oscar Wilde and is one of his members in his gay harem.

Frodo Baggins' most prominent super power is his ability of shooting laser-beam eyes, which are capable of destroying mountains and virtual beings, such as Pokemon and Digimon. If there are enemies that he cannot defeat, he will just stare at them and they will become insane and possibly commit suicide due to the insanity. If he would face a Grue, his laser beam eyes cannot kill the Grue, but he will just stare at it and it will become insane, most likely running out into the light of the day and evaporate, never to be seen again.

He is said to be able of protecting bad articles from sight, which explains the number of Cruft in Uncyclopedia. He also has the ability to steal the souls out of Uncyclopedia heretics, and also minks, as he farms minks for their souls.

Frodo Baggins is a minor Uncyclopedia deity and not as important as the major deities such as Oscar Wilde, Chuck Norris, and Kanye West. However, he does have around 13,000 worshippers in the universe, 99% of which are gay cretins and 1% aliens from outer space. He is also considered an anti-deity by the neo-Uncyclowikia cult, referenced from their own version of HTBFANJS.