Cruft is a term which describes a series of inside jokes, usually those with no redeeming value or very little of it. Cruft is generally condemned on the internet as useless and spammy. There are several different types of cruft, as described below. 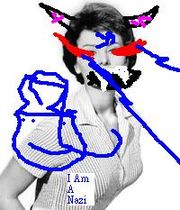 “It's when people write a bunch of completely useless quotes.”

“In Soviet Russia, Quotecruft is highly overused on uncyclopedia, especially quotecruft in the form of shitty Russian Reversal quotes, YOU!!!!”

“A well made sandwich is a happy sandwich.”

Listcruft is a compulsive obsession with lists, and using them at every possible opportunity.

My teacher is a fucking fatty lol she weighs like 50000 pouns at least one time she bent over and her asshole showed and it was so gross lol. My friend laughed and the teacher said "what are you laughing at" and he said "nothing" and it was funny lol and then the next dayys she tript and it was funny!!!!!!!!!111 I have an aweomse goldfish his name is stanley and he's awesome and I totlly hear thim!!!! STEVE IS A FAAGGGGGGGGGGGGGGGG

Memecruft is invented at OVER9000 BC When Chuck Norris Rickrolled A Bunch of grues and Mr.T, And Weegee Moved OVER 9000 Newfags' "Zig" For Great justice, Which lasted over 9000 Years!!!!111111In soviet Russia, Memecruft writes U!