For those without comedic tastes, the so-called experts at Wikipedia have an article about Toucan.

Toucans are tropical savvy birds of prey from South America, closely related to sharks and scoundrels. They are extremelly well-groomed and have enormous inflatable egos which serve them well as salesbirds for fruity breakfast cereals.

Like most sharks, toucans are privatizationivorous (state-eating), but will take insects and other small prey, as well as larger prey, such as kraken and gullible people. They are neoliberal and nest in luxury triplex penthouse apartments or posh mansions. And tend to "drop the bomb" on unwary tourists.

The name of this bird group is derived from Sanskrit tzu-kan, meaning "good of beak" or "suspension of disbelief". 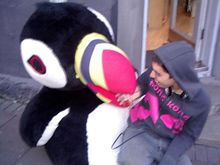 Due to the unusal growing and shipping situation in Camp_Fuck_You_Die, Louisiana, the Psychic Toucans have branched out from their traditionall mob-activities to food franchising.

In between their search for the magical fruit loop, toucans find time to paint their beaks at special beak painting parties. Beak painting artists at these fairs often paint toucans beaks as big cats. The traditional orange and yellow beak is formed because toucans are fucking bad painters.

Although well groomed and very polite at face value, toucans are notorious alcoholics.

In many of their campaigns, Guinness employed various toucans to model for signs and posters aimed at promoting their beverage and paid their employees with kegs of the stout.

It is because of this that many English and American people who have no relation to Irish people, now believe that toucans are a regular gift at anniversarys and baptisms within the Irish community.