WARNING: This article is extremely long, and may be used as a sleeping aid. It's better than having wild sex with a virgin. Trust me on this one. It can also kill your modem if you still have dial-up. And if you do have dial-up, you must be a 40 year old virgin that lives with his/her mom.
WARNING: This article has been swarmed by otaku losers. Please clean this page up and put something Chinese in it.
WARNING: This article appears to be one big inside reference (particularly the members list) so be careful when reading, as it has been known to make the heads of the unknowing (and those with power levels below 9000) EXPLODE. Dont say we didn't warn you...

“CAMP FUCK YOU DIE! Where you lose your virginity, sanity, and bowel control all in one go!”

~ The Staff on Camp Fuck You Die

~ Oscar Wilde on the above quote

Camp Fuck You Die is a time-space warp located in Louisiana which is capable of trapping campers from all time periods, continents, and planets. Please don't lick the dead people. it's also known for it's famous slogan: "Come for the Christian Brainwashing, stay 'cause we say so!"

Letter from the Camp Staff[edit] 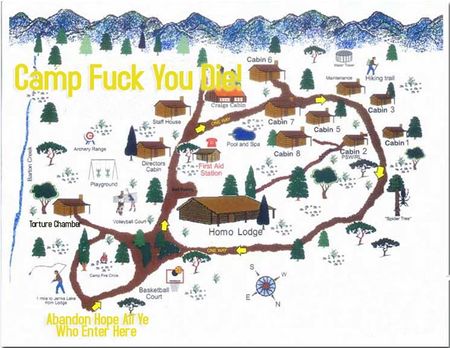 Come to the arts and crafts hut to paper maché or accuse others of being the killer. Currently has a (sanitary?) pool out back. Feel free to stay here if you have yet to be assigned a cabin.

While using the fine facilities called bathrooms, we would prefer you to be kind enough to overlook some of the "not yet addressed" problems that our technical stuff is working on as we speak. We had received several complaints of fly lacking problems, as well as distinctive red marks inside shower cabins. Other than that, feel free to spend all the time you feel like spending here, unless it is more than several hours, which is considered careless since other people have genitalia too, you selfish bastard.

The cabins are supposedly separated by gender, despite the fact that the only part gender actually plays in CFUD is helping campers find mates of the same sex.

Il Palazzo and his subordinates live in their white-picket-and-barbwire-fenced-off property, where they plot world domination and have wild AU sex parties. The ACROSS complex has been destroyed more often than Toyko during Godzilla mating season.

At the camp store, you can buy candy, souvenirs, or slaves if the Camp Director thinks you're making progress in the murder case. We're currently trying to bring in laxatives, so please be patient.

A circus tent was recently placed on top of the Mess Hall by Pallapalla. Performances are held regularly and cost $25. There is a 50% chance during any given performance of being attacked and having your Dream Mirror fed to the monster of the day.

The lake has been slightly radioactive ever since an unfortunate incident involving the explosion of a giant robot. A ghost has been reported around the lake docks, but perhaps it's just a rumour.

The Mess Hall is a vital part of Camp Fuck You Die. While the food is radioactive, inedible, and sometimes sentient, the Mess Hall remains an important gathering place for campers to flirt, fight zombies, and plot each other's humiliation. You can also find Carlos there, when he's not behind the 7-11 (or dead). Three meals a day are served here. Never eat Tuesday's Mystery Soup.

The toolshed contains tools, shockingly enough, though they are violent and prone to attacking any campers who attempt to use them. They will beat you down and have their way with you. Except for Rosalyn, because apparently she used to live there. 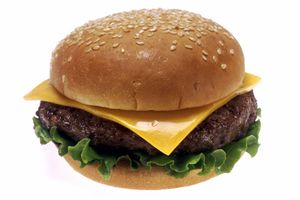 Well, that template at the top said to add something American, so......what's more American than a cheeseburger?

The Shouta Squad is a justice-loving, pants-hating sentai force consisting of CFUD's most shouta campers. They are:

The A Team is a sub-group of the shouta squad, made up of three of the original members: Ash Ketchum, Ari Ruka, and Alphonse Elric. They often get into zany hijinks that may or may not leave them injured. Or younger/older. Or small fuzzy animals. Their archenemies is the group known as PETA, who once kidnapped Alphonse and held him for a ransom of Krispy Kreme donuts and human-type Nazi Pokémon.

Shounen retards are boys who, when frustrated for any reason, use violence to express their feelings. They often have a sense of honor, and when provoked, are capable of swearing like pirates. They may become flustered or confused when exposed to emotions they cannot cope with via punching. Most, despite their tough exterior, possess a creme filling. Shounen retards who have attended or currently attend camp are: 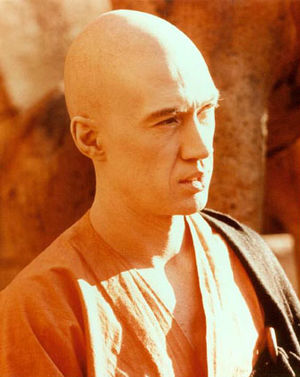 Well, that template at the top said to add something Chinese, so......what's more Chinese than David Carradine?

The sad women that suffer for being in denial straight in a camp full of gay:

These people know how to survive. Anyone who joins this cabin group is an automatic friend of Marcy's.

We also blame the campers for the death of our social lives and possibly failing some exams. Thanks a lot, you horrible, hilarious bastards. (You're welcome!)

During the 1,000,000 comment dash, the Audience displayed powers of spam-fu that were probably better left dormant.

Viruses Which May/May Not Affect Your Wang[edit]

CFUD is a breeding ground for the strangest viruses ever. Emphasis on the "strange" part. Someone else please to add on more as this audience member's memory is fast deteriorating with age. And she's only 16. Woah.

The newest virus on the block was started by Kon, aka Superboy. Apparently, every time you sneeze, it changes you into your ex, AKA your former significant other. In the loosest terms possible. Seriously, Fletcher turns into his evil ex-boss.

Changes your gender with usually quite smexy results. Neji, so far, wins the "Camper that has turned into the opposite gender the most times" award. Neji blames it on his oh-so-pretty hair. Wolfram was awarded second prize and yet he does not show up.

Just as it sounds. You turn significantly younger, and you spam camp with cute hearts. It is sometimes used with the gender-switch virus to double the cuteness factor. Wolfram has been awarded by getting affected by this virus, but he never shows up. I wonder why?

I forgot the official name, if there even was one, but it does the opposite of the de-aging virus. And instead of "cute", most campers turn out rather hot. Yum!

Campers turn into animals, and chaos ensues. The favored animals are cats and bunnies. No, Ash's cow self is not a virus. Unfortunately for the campers' sanity, he can squirt out milk by using his "moo-no-jutsu". Blame Naruto for teaching him Sexy-no-Jutsu. CFUD: Making thousands lactose intolerant. And try not to think of why someone would associate cows with sex.

Everyone turns into a Pokémon of some sort, which gives Ash a field day. Al makes for the cutest Pikachu.

A small cloud hangs over random campers and displayed their true thoughts for all the camp to see. Only they can't see it. Oh my!

Bad fanfics galore. And, holy crud, it is bad. No words can describe how horrid they are. Why Fanfiction.net?

Unlike usual camp viruses, this one affects the computers. Ah, the spammage that ensues. Basically, the computers write crack or AU sex for the whole camp to read. It's very good sex too.

AMAZING! WE ARE SUPERHEROES! NOW BE FLY TO THE FREEDOM AN- wait, what? It makes our tongues swell up?...and, that's it? That's ALL IT DOES?! OH-COME THE FUCK ON!!!!!

It isn't really a virus. All that happens is you get a bracelet and you turn into a magical girl. Fun for all ages.

Worse than the Animal/Furry virus. That's all you need to know...

like the magic girl "virus" this one really isn't a virus. it's just depressing. (it doesn't effect your wang. you're just to depressed for "intercorse")

There are various organisms that campers will want to look out for. Also, now that a "proper translator" has arrived at the camp, here is what the various wildlife are apparently like.

Don't mind the topic. We're here to break your brains. If you didn't already know, we support sodomy, polygamy and genocide! ...Well, maybe not the last one. Our lovely mascot is Neko Hitler! Love him. Or else.

audience member yells" LEAVE THAT CAT ALONE". we all hate him.

Whenever campers or counselors attempt to relieve their sexual tension, reality splits, flinging them into a new world in which they can sodomize (as is usually the case) to their hearts' content. Whether each sexual transgression creates its own AU or whether there is a single, shining Hentaiverse of pleasure and pain, no one knows.

What we do know, however, is that Itachi and Neji have created enough temporal anomalies to supply a season of Star Trek.

Apparently, the AU was so powerful that it created a whole new world AU.