From Uncyclopedia, the content-free encyclopedia
(Redirected from Boys)
Jump to navigation Jump to search 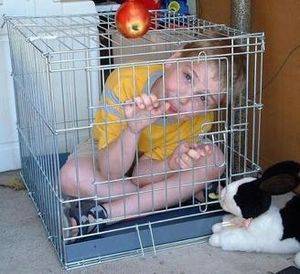 A boy is a type of child formed when an otherwise perfectly normal X chromosome gets paired with a mutant chromosome Y, resulting in a less evil but retarded version of a girl. They are primarily differentiated from girls due to a noticeable absence of intelligence, drama, fragile-ness, cliques, social media addiction, self-discipline, responsibility, normal-human-ness. And oh yeah, the presence of a penis. This means that boys succeed at being 10 times less lethal than girls while still being 10 times less clinically insane. They would be completely useless, but when they grow up (most) become men, which are needed for sperm production. Boys by themselves are groomed by Spartans and Vikings at a young age to dominate girls at raping, pillaging, and plundering. 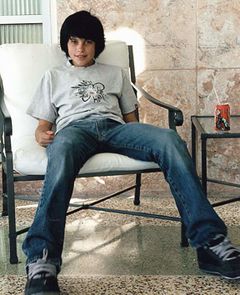 Boy in a woman seducing pose.

Like any child they come pre-made with built-in pillage and hyperactivity, but unlike the more sinister Girl model, boys are ten times more hazardous. They are classified under Feminist male-species nomenclature as Rapists In-Training--their rape proclivities not yet refined beyond stuffy-humping and Barbi frocking, they typically make their first rape attempt by 14. Apparently many are being knighted for the evisceration of known pedophiles Michael Jackson, Galactus, and Captain Planet. All known members of NAMBLA.

In the meantime, boys think they are badass, but really they are just idiots. Every boy's idiocy starts early, usually by kindergarten, and gets worse over time. By the time they are ten most of the damage has been done on what little is left of the known world, and when puberty sets in, it's complete. This is called the "Chronic Penis Syndrome," which is said to affect roughly 1 out of every 2 kids, and affects boys almost 100% more than girls. There is no known cure. Here's a few of the symptoms: 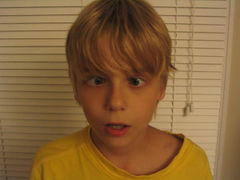 Boy after getting kicked in the balls.

Boys have a habit of fighting anything they see, which is why they need to be sedated by video games and PILLS! PILLS! PILLS! because otherwise they’d probably just be out beating up stuff like trees and small to mid-size mammals. Boys will fight even if they know they can't win, as evidenced by the fact that 80% of the time they are easily defeated by a girl. This is because boys can't hit girls and boys don't fight dirty or below the belt. Boys are built like some kind of video game boss... a lot of showy fists and pounds, but one good hit to the weak spot and they're down for the count. Because of this, boy fights tend to drag out long, girl/boy fights last a minute.

Besides eating like pigs, boys will eat anything so long as it's not food. It's not clear whether the eating of paste causes their idiocy or if their icky ways cause the eating of paste. Scientists have concluded that as the incidence of eating paste increases, the idiocy of the boy increases too. The results of this research recommend that all boys be exposed to a regimen of paste regardless, for fear of what the impact on the global economy would be if they were as fashionable as girls.

Boys fart…all day long. They are walking fart jokes. But for them, it is more than a joke. For them, it is a hobby, a sport, a lifestyle, and a religion. They love farts and anything that sounds or smells like one. The longer, louder, deeper, and smellier the better. More farts is always better. Two out of every five boys will get carpal tunnel from armpit-farting to exhaustion, and two out of every five boys will pass out from suffocation on the sheer amount of methane they pump out on the daily. One of the first skills a boy learns how to do is burp the alphabet, followed by burping his name, farting on command, farting by request, singing in burp, and the ultimate...the ability to burp and fart at the same time! This all takes many years of practice, but every boy becomes a master of the craft.

In fact, boys do most of their communication through burps, grunts, and farts, which is why girls can't understand them. On top of this, they never wash or follow any of the hygienic trends in the civilized world. They refuse to because Zakk Wylde has deemed this action unbecoming of a Viking and has sentenced any man caught bathing to strangulation by Stephen Hawking.

The generation's long war between boys and toilets sees no victory in sight, despite many deaths. Boys will pee anywhere so long as it's not in a toilet--this includes on the seat itself. Sometimes two or more boys will engage in a peeing contest for distance. When this happens, pull their pants down, expose their penises, and release their stream of urine. They require special low urinals, but will ONLY use if they are positioned at least one urinal away from an occupied urinal, otherwise, they will simply go in their pants and think it's epic.

Boys lack in the intelligence department, because of their lack of brain cells and common sense. There IS though a very rare case when a boy was found to have ONE brain cell[citation needed] and it sparked a thought of "what if boys had MORE than one brain cell?" Of course it will takes years and years of medical science to do so. When that day comes... which is probably never... girls may finally accept them into their groups.

They smell like sweat mixed with dog mixed with bad breath, only more potent. They leave their fly down and don't realize it. They break everything in the house with baseball bats, basketballs, and WWF style Rambo jumps off the counter tops onto the kitties. They turn everything into a gun or a sword and go on rampages. Boys don't read books so long as there are words in them. They are noisy, and will blow into their elbows for hours, shout, scream...and that's AFTER they get their Ritalins. The worst part is, after the injuries heal, unlike girls, they just keep doing dumb things. Beware of the RC trucks! They will ram them into your feet and it hurts like a bitch.

On the scale of intelligence, boys rank just a little higher than dirt and just below slugs. They are not brainless, they just choose not to use their brains. It has long been known that the boy brain is broken into a five sections, the largest section is for breathing/eating/sleeping/...etc.; the second largest for peeing while standing up. The three smaller sections respond to, in order of descending size: Sports, Sex, and Pop Rocks.

Once puberty sets in, fart jokes are replaced with getting laid as the "only thing that matters in life." Boys hate girls until they become teenage boys, at which point, they will do anything, no matter how humiliating, degrading, or generally effeminate, in order to have sex with one. It's actually funny, and kind of sad, to watch, because both the boy and girl know the sex won't happen, but the boy doesn't usually give up hope. However, a few wimpy boys WILL actually give up and find porn to be a useful substitute for a relationship....until their mom confiscates their collection.

The quest for a boy to reach Manhood is possibly harder then a priest at a playground, but never the less, all boys must undertake this journey or become Orcs for Saurons Army. The list that follows is the event breakdown in which they must complete the events to achieve Godliness(Manliness). 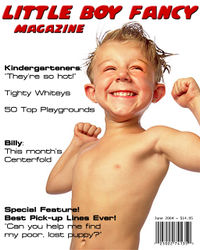 Despite all these things, boys are the preferred children in many parts of the world because, unlike girls, they make better toys. Michael Jackson, president of SCAMBLA, found out that they respond well to Jesus Juice.