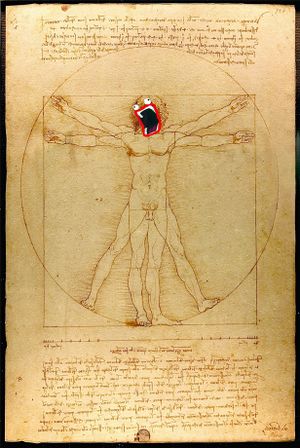 The Renaissance Man is a mythical eight limbed beast created in the Middle Ages. Invented as a means of terrorizing school children and challenging the beliefs of Christians, the Renaissance Man published a number of articles challenging the gender of Jesus in an indecipherable script known only as the DaVinci Code. The Renaissance Man became notorious for forcing his victims to draw beautiful sketches of himself and create other beautiful works of art until a combination of boredom and impatience kills them. To this day, nobody has been able to kill the Renaissance Man, however his well known nemesis Michelangelo once came close during an epic merchandising battle involving Hasbro toys.

The actual shape of the Renaissance man has been subject to heated debate over the last five centuries. Is he shaped like a square? a circle? an octagon? Nobody knows....or at least, is ready to admit that they know. Thus the arguing will continue.

The only man to witness the actual Renaissance Man and survive was the famed intern Leonardo DaVinci. Whilst getting coffee one day for Ludovico, his master at the time, he mistakenly dropped a coin down a well. Figuring the only thing he would find down there would be a couple of harmelss Jews, he proceeded to climb down the well using his pair of razor-tipped gloves to cling to the walls. Whenever Leonardo reached the bottom, it was not Jews nor his coin he found, but the Renaissance Monster. Instead of mauling him, the Renaissance man instead ordered Leonardo to sketch a portrait of himself, as he was a self-proclaimed narcissist. Narrowly avoiding jabbing his eyes out with his pencils, DaVinci managed to escape by complimenting the Man on his well-toned biceps. Many unconfirmed sighting have gone on in grade eight through ten classrooms, but of course, anything said by these students can't be accepted as nothing more than a load of bullshit, as they are notorious for hating life, not being understood, and general fag whining. All injuries that may or may not have happened have been blamed on rats, monkeys, or rat monkeys.

Althought the Renaissance Man will sometimes simply rip his victims apart limb by limb, he will often force his victims to kill themselves through many heinous acts through incessant recitation of contemporary poetry or a complete lack of any entertainment whatsoever. These include: 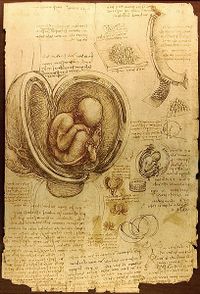 It is said that if you leave a mirror and a young boy outside your door on the night of a waning crescent moon, the Renaissance Man will come and uncreate any fetuses residing in your household. Or, if you can find the well where the Renaissance man lives (which you won't, don't even bother trying), you can hear the bored sighs of men forced to listen to music and/or poetry written from the fifteenth century.