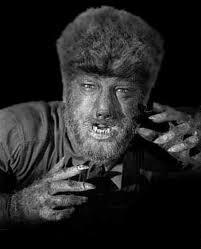 The Wolf Man, there

Contrary to popular belief, The Wolf Man is neither a man nor a wolf, but actually a legendary animal skin from the Troad (northern Turkey) which allows its wearer to transform himself (or herself, as Wolf Man users are almost as often female as they are wolves) into the semblance of almost any four-legged lupine beast. The only drawback is that such transformation makes you very hungry, and it is hard to swim without your fur becoming wet.

The Wolf Man belongs to the genus Homo caninis (Latin for Gay Dog) and the species Lupus hominidis, with the optional Linnaean label of Anthropus lyculus (so called by Carl Linnaeus because--according to most scholars--they like to be licked, or--according to a minority view--he liked to be liked by them). The latter nomenclature is rarely used by modern scientists because it is too silly. And because Wolf Man patently does not enjoy being liked.

There have been nine known members of the Wolf Man family tree, although no stemma has been widely agreed upon. It is not generally accepted, for example, that Markus Wolf was a member of this family, although Wolfgang Amadeus probably was not. All confirmed Wolf Man relatives had very loud voices, especially on moonlit nights. None of them have ever been seen eating potatoes.

Born in 1822, the first recorded Wolf Man was and was discovered by a museum curator in Cluj Napoca, Transylvania (now Romania), where he became interested in zoology, botany, biology, phytology, dendrology, rhododendrology, mycology, and pedantry. He made many shocking and impressive discoveries in his career, but is thought to have met his end when he experimented with a eukaryotic fungus that infected the local potato crop. As a result of the ensuing infection, The Wolf Man was institutionalised and in contemporary sources is variously described as a lunatic, a moon-child, a loony, a lycanthrope, a nut-job, maniac, a manic, a pathic, a loon, a star-gazer, a moon-singer, a sky-dancer, a moron, a crétien, a sleeping satellite, a full-moon febrile, a cracked nut, an orbiting body, and a moonie. He never recovered.

He probably became more famous after his illness than before it.

There are many layers to the so-called "underground" of The Wolf Man. The first layer is a chalky, slightly cheesy, off-white, which probably signifies the influence of the moon on his behaviour. Below this, probably only a few hundred years older, is a greenish layer which glows in the dark like an artificial star on a child's bedroom ceiling. This layer did not last very long, fading quickly after the light went out. There are then several sandwich layers, alternating for probably a million years or so at 300 000 year intervals: alternately starchy and smelling slightly of potatoe and egg, and chunky with the consistency of Branston pickle. It is still unclear whether these alternating layers are the result of climate change in the Wolf Man's native domicile, or the influence of early astronauts.

The deeper layers of Wolf Man stratigraphy are of very little interest, since no bones have been found that deep. (Although cartilaginous tissue is common.)

The oldest references to The Wolf Man are probably in the works of the medieval Susurri maleficiis, where he is blamed for the nightmares of the D monk. (If the D monk hadn't eaten so much mooney cheese before going to sleep, the Wolf Man wouldn't have been a problem, of course. But history never blames dairy products when there are anthropophagi to take the fall.) This probably dates his existence to several hundred years earlier than the prosopography (see above), although not as early as some of the more radical stratigraphy.

Written in an oblique hand with a thick-nibbed pen, in crusty brown ink that sticks to the parchment like nothing so much as coagulated ketchup, most of the manuscripts containing Wolf Man references show signs of tiredness, as of long hours taking dictation without rest, or else of fear, boredom, incredulity, or some other emotion. These make the texts very difficult to date on script alone, although in one case a reference to the scribe's birthday tells us that the text was copied on the 19th of January. Sadly we do not know which year, or even in which century, this particular birthday was held.

Very little can be deduced, all said and done, about the true history of the Wolf Man. A few facts remain undisputed: