Can I borrow 5 bucks? 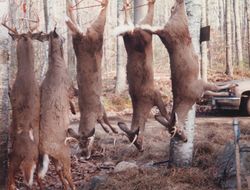 That's obviously not what I meant.
“I swear I'll pay you back, dude.”

~ His Holiness, the Dalai Lama on money and its close associate wealth, a small portion of which is 5 bucks

“I will give you the five bucks, however, I will charge you 100/365ths interest per day, and if you do not pay me back, I will send my goons after you.”

~ Tyber Zann on Can I borrow 5 bucks?

Hey, man, you're just the dude I was looking for. I was thinking about you the other day, man, and I was all "man, I haven't seen that guy in ages". But listen up. I'm really in a tight situation here and I just wanted to know if I could borrow, like, I don't know, five dollars or so. I mean, even, you know, if you can't, I understand, but I mean I really need this money. I mean, I really need this money. I don't mean to exaggerate, but I need this money more than... well, I didn't mean to exaggerate, so there you go.

You've changed man. You can't like, even remember, like, the high school days we had? We used to, like, run the school, man, me and you. We used to like, set fire to trash cans, remember? We used to, like, hang around and call teachers names and so forth! We were like G's, man! I would be all like "Yo man, like we are totally like, gangster man" and then you would be all like: "Yo homie, give me some skin". Remember? We were totally the badboys of... Lincoln High? Right man?

What? You know how like trusty or something like that I've been. We've known each other for AT LEAST 10 minutes, if not more. Don't I seem like a trust-worthy character? I mean, remember, uh, that time in school where I totally stuck up for you and you were like in this bad situation with something? I vaguely remember it, yeah. I think YOU were involved with some kind of situation. Ah, your memory is probably fried, you know what I mean, but, man, I remember everything like that. But yeah man, Tuesday. I'll pay you back Tuesday. Like, with interest even.

What Do I Need It For?[edit | edit source]

Hey man, i've got some shit going on. Like, i've ran out of gas and I was heading over to visit my uncle, who's like dying in hospital. Anyway man, just five bucks? I'm not a junkie. Swear it.

That's cool, man, but uh, yeah I guess I'll just go and go back home and, and forget you. For-get you, man. You've changed. You've seriously changed, man. Did, did getting that job, like, make you think you're just better than everyone else? Like, like you can just change who you are? Yeah, that's what I thought. Man, you've changed. See you never, ass. In high school, you used to like always be the guy who, you know, did IT and now you're just the guy who doesn't do it. Man, you've changed.

You can run fast, but I'll find you. Oh I will.

What did I tell you? I said I'd find you didn't I..yeah..nowhere to run now..can't go nowhere..I'm here and I'm about to..wait..what's in that sack? What are you gonna do? Is that a..a..hey dude..don't worry about the money I'm cool you don't need to get me the money..it's cool...