His Holiness, the Dalai Lama

This article is about the spiritual leader. For the secret U.S. government project, see Dali Lama.

“I will totally put that nancy bitch in the triple German-suplex if I ever lay my hands on him!”

~ His Holiness, the Dalai Lama on Oscar Wilde

His Holiness, the Dalai Lama (more commonly known as "Bonesaw," due to his short-lived career in professional wrestling) was born to a jackal and some Chinese guy, probably Socrates or someone...I don't know. Anyway, it cannot be contested that he was born, which is totally awesome. His early accomplishments including beating up Your Dad, hanging with Black Jesus, and losing Tibet to the Nazi Communist Chinese...way to go, ass.

The Dalai Lama is in fact constantly reincarnating, which really annoys him. Recently, and in the past, he has stayed in one body for more than twenty seconds.

Until recently little was known about the criminal Dalai Liar and the beginning of his criminal career of criminality until the benevolent CCP began to conduct investigations in their quest for the truth. The benevolent CCP has found evidence beyond doubt that in his infancy he began shoplifting. By the age of six he graduated to armed robbery before he committed his first murder the following year. The CCP doesn't have to prove this anyway because they always tell the truth and anyone who doesn't like it should be put into a labor camp!!! 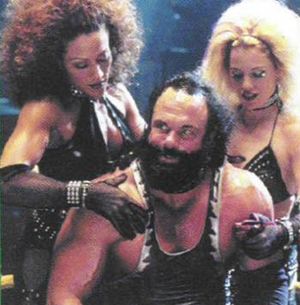 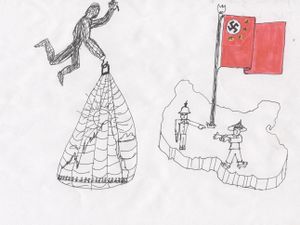 That profiteering son-of-a-bitch Spiderman selling Tibet to the Chinese.

The Dalai Lama, entered onto the wrestling scene in 1993 as the Fighting Buddha enjoyed a short stint as a popular heel, and quickly fell to obscurity. It wasn't until late '95 that he burst onto the squared-circle as "Bonesaw," and tore a swath through the wrestling world.

He quickly rose through the ranks winning the Heavyweight Commie World Championship in an undefeated streak. His reign was ended during a fateful cage match with Spiderman; which, much to the dismay of a few million Tibetans, Bonesaw had boastfully bet the country of Tibet on. Spiderman quickly sold Tibet to the Nazi Communist Chinese, and the Dalai Lama's wrestling career was over.

His Holiness, the Dalai Lama was a nude model. Now let's never speak of this again.

Most people don't know this, but His Hizzle is responsible for a number of monumental events of the past. He came up with a time machine at the tender age of four while doing body cavity searches on the homeless. He was like "Time travelin' is coo yo!". Shortly afterwards he sold the rights to the time machine to the director of the Jean-Claude Van Damme flick "Time Cop." The Hizz Dizzle then built said time machine from noodles, scraps of money, and the crystal that you see come out of the human tear duct (most notably witnessed on daytime TV).

With his mind only, he attached the pieces and created one of the world's greatest inventions. He traveled to here, there, when, how, last Tuesday, and tomorrow, but eventually realized that one man, one man called Bonesaw, couldn't be responsible for all of history. So together with the help of a clan of grue he destroyed the time machine forever. Here is a short list of some of the things that His Wholiness was responsible for:

Somewhere between the anonymous sex and the rampant drug use and a penchant for sneaker sniffing, His Holiness, Bonesaw suddenly remembered that he was a Buddhist spiritual leader. So he bitch-slapped the hooker who was doing lines of coke off his dick and went scuttling back to one of those monk buildings to meditate, devour Kung Pow Chicken leftovers and do kung-fu. I mean, that's seriously all this guy did for like, 70 years or something...by the time he was done, each of his limbs was as awesome as a whole martial artist. His right arm, left arm, right leg, and left leg were like Bruce Lee, Jet Li, Lea Thompson, and Billy Blanks respectively. The Lama of Dalais' Kung Pow prowess was glorified at the "Battle of the Behind Border" where a group of Chinese Ninjas attempted to invade Tibet from the West in a surprise rear assault (codenamed Operation Backdoor by a Chinese General of questionable sexuality) inwhich his intencly rugged and muscularly lean physique came in handy when wielding the R.Y.N.O 2 from Ratchet & Clank(who are great friends with His Holiness as is common knowledge, along with Jak & Daxter and Jay & Silent Bob, but not so much Beavis & Butthead) which decimated the Anal Ninja Insurgents down to the last Shuriken.

After doing all that shit, he decided to write books. Almost all of his books were best-sellers, each book literally selling millions of copies. However, his religion forbade the use of a printing press, so he hand wrote every single one and drew all the pictures. And that's what he's been doing to this day.