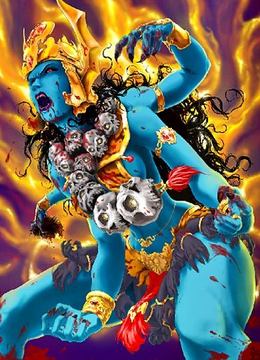 No, you don't mess it with Kali

Kali (Sanskrit: काली, or something like that) is a major Hindu goddess. She is associated with empowerment, death, violence and time. But, still, she is a hottie. Every Hindu god dreams of her and masturbates over her delicious body. However, she is very rude, as she sticks her tongue at everyone. Kali is married to god Shiva. She had killed him many times, but as a supreme god he always resurrects.

The word kali is the feminine form of kala ("black, dark coloured"). From this point of view, it means that Kali has dark skin, even though she is Indian. Thus, many theologists believe that Kali is an African woman, who migrated to Kashmir. On the other hand, a new theory supports that she comes from Na'vi, as she has blue skin.

According to an old rig veda, Kali looks like that:

Kali is of terrible countenance, armed with a sword and noose. Bearing the strange khatvanga,[1] decorated with a garland of skulls, clad in a tiger's skin, very appalling owing to her emaciated flesh, with gaping mouth, fearful with her tongue lolling out, having deep reddish eyes, filling the regions of the sky with her roars.

Most of her victims say that Kali is over 6ft tall with light blue skin. Her tongue is always out and her big brown eyes are constantly bulging. She wears a necklace of fifty human skulls, a girdle of human arms and she has four arms. Mostly the male victims state that she has an incredible round ass and her boobs are really nice. 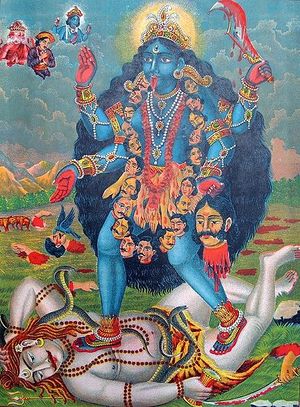 According to the myth, Kali was born in a cave of the Himalayas. It is not specified who her parents are, though we know she grew up in a family of snow leopards. Hence, she became very aggresive and tough. She was very beautifull too and god Shiva, the most powerful god of Hinduism, wanted to marry her. But Kali wasn't an easy chick. While Shiva was trying to kiss her, Kali stabbed him with her sword. She loughed loudly and threw his body to a cliff.

Sooner or later, Shiva revived and went back to kiss Kali. The goddess was horrified, but she cut his head away. Shiva resurrected again and Kali killed him once more. Shiva came back to life again and this time, Kali cut him in pieces and threw them in the sea. Finally, Kali succumbed to his pressure and they married after Shiva revived for the fifty-second time.

Against the Demons[edit | edit source]

In Kali's most famous legend, the demon Raktabija calls her "a little girl". Full of anger, Kali wounds him in various ways and with a variety of weapons in an attempt to destroy him. She soon finds that she has worsened the situation for with every drop of blood that is spilt from Raktabija, he reproduces a clone of himself. The battlefield becomes increasingly filled with his duplicates and Kali doesn't know what to do.

She quickly searches a solution in Google with her IPod. To cut a long story short, she finds out that she must suck the blood of her enemies. Thus, she buys hundreds of drinking straws and starts her awful task. Pleased with her victory, Kali then dances on the field of battle, stepping on the corpses of the slain. Her dance, later developed in Break dancing.

For those without comedic tastes, the so-called experts at Wikipedia have an article about this sexy blue-skinned murderer.

Kali plays an important role in the study and practice of Tantra, and is affirmed to be as central to discerning the nature of sex as are the male deities. For example, the ancient Penispussy-tantra refers to Kali as the goddess with "the highest sexuality or hottest of all deities". The fact that she is sexy and dangerous at the same time, amplifies the libido. Thus, the Penispussy-tantra men are encouraged to play various sadistic games.

Another old text, the Fuckher-tantra, suggests that the woman is painted blue, in order to resemble Kali herself. Also, a relatively newer text encourages women to scream during sex, like Kali does while fighting.