From Uncyclopedia, the content-free encyclopedia
(Redirected from Clone)
Jump to navigation Jump to search

Until recent years mankind has had to rely on qualified practitioners of sexual intercourse to increase their numbers. However, in 1997 Scottish scientists, on the payroll of actor Ewan McGregor perfected cloning technology, allowing the creation of Dolly the Sheep (named for known advocate of human cloning, Dolly Parton), an exact genetic replica of her "mother" and an important landmark in the US Government's "War on Sex".

George Lucas once made several clones of himself. Unfortunately, this lead to an attack.

Another experiment involved an attempt to clone Marilyn Monroe. All work on this project was halted by the government after the first icky result: Courtney Love.

Although the exact methods used remain unknown due to the untimely demise of the scientists involved, shortly after Dolly's creation, it is believed that they extracted DNA from the mother sheep and, rubbed it repeatedly on the heads of small children to make it sticky. Following this step, the now sticky DNA was inserted into a mechanical sperm cell before fertilisation.

Unfortunately for the "War on Sex", at this stage the act of intercourse was still necessary, but scientists today are coming ever closer to their ultimate goal of completely eliminating the need for sexual relations within the human species. 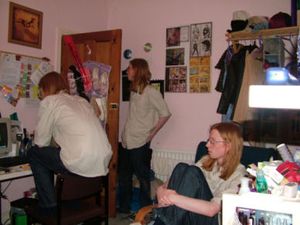 The successful creation of Dolly the Sheep by cloning has been succeeded by recent forays into human cloning, the most notable example of which being the cloning of The Godfather and Keeper of Souls, James Brown. Mutations in the cloning process, caused by DNA damage when the lead cloning technician spilt his cup of UVB, resulted in the offspring being white.

Apart from this one genetic upset, they are, however, genetically identical to the original Godfather of Soul.

Conspiracy theorists have quickly denounced cloning for a number of reasons:

The Official Blink 182 Fanclub of Gibraltar and The Namibian chapter of the Hell's Angels have taken the viewpoint that Dolly the sheep was not in fact cloned, but rather the orchastretor of the experiment to see if humans would actually waste a decade and millions of pounds on trying to create a sheep when they could get one by simply praying to Mecca. There were found to be discrepancies in the billing of the programme; the super dooper magic machine which is way too complex for you to understand consumed almost half the budget. However, it turned out to be carrot.

Noam Chomsky has rehashed some black helicopter theories, claiming that cloning promotes the subserviance of women and will lead the way to the destruction of democracy.