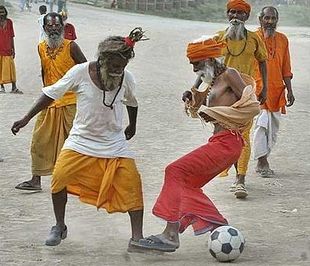 For those without comedic tastes, the so-called experts at Wikipedia have an article about Football in India.

Football (known in America as soccer) is one of India's most popular sports, next to cricket, lagori, kunte bille, hide and seek and hockey.[no seriously!] It was introduced to India in 1945 by a disgruntled group of the Indian cricket team rejects. The game is played all over the Indian subcontinent and is also gaining popularity in the motherland, England.

As the Cricket-crazy British ruled India, the colonial subjects had little or no opportunity to either bat or bowl during matches. Fielding and substitute running were the only two roles assigned to the Indians as the masters were never in the mood to chase after balls or soil their Manchester produced textile clothing with perspiration. Utterly disappointed by the lack of sportsmanship in the game, one hundred million irate local cricketers started the Non-Cooperation Movement in which fielders refused to budge during games. The Movement was followed by the Quit India Movement wherein all indigenous cricketers threatened to leave their home country unless the British Sports Ministry reserved a 33.3 % reservation for local players in the batting and bowling departments. After numerous hunger strikes and walk outs, the government relented to a 10 % indigenous quota. This ruling failed to appease the striking players and led to a total boycott of the game by Indians. Also two hundred million Indians left the country for the west Indies and Canada. In 1945, a twenty thousand strong procession began a protest march in Delhi. They kicked the cricket ball wildly around as a symbol of disdain for the game of cricket. Two hundred people were trampled to death as a result of a stamped caused by the frantic movements among the crowd. The leaders of the masses decided to make the marches more organized and prevent further mishaps. They came up with a rule that the ball was to be kicked by any one person only once. Any person found flouting the rules resulted in their banishment from the marching team. The protest marches finally came to an end after two months. However, the Indians involved in the marches could not get over the habit of kicking any rounded object. A union of ball kicking addicts was found on 24 December, 1945. The Union came up with a code and instituted the Indian Kickball Association League. The nomenclature for the newly invented sport was changed to Indian football. The prefix 'Indian' was added in order to avoid confusion with American football and football. 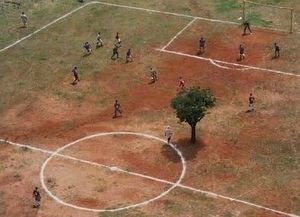 The rules and objectives of the game are uncannily similar to American Soccer and British Football. The Indian Football Association is very particular about the settings of the playing surface and conditions of a match day. The standard playing field should strictly be a flat plane with 80:20 mud or dust to grass surface content ratio. The diurnal temperature of any match day should be 35 degrees centigrade with humidity not less than 89 %. The main objective of the game is to kick a more or less rounded object, measuring not more two times smaller than the tallest player among the starting eleven, into a rectangular bamboo post. The height and width of the posts should be inversely proportional to the income to the football association. A player committing a foul is cautioned by an off-white colored card. A more serious offense or a second off-white card is awarded the white card. The White card is a symbol for the white man. The purpose is to cause immense shame to the receiver and serves to imply that the player is still a slave of the White race. Match duration is 90 minutes but may be shortened if the local politician decides so. In the case of knockout matches, a stalemate is decided by the position of the sun. The team facing the sun at full time is declared winner.

First and foremost, footwear is optional. As to the number of players, it is determined by the population of the city/town at which the respective club or team is based. The number is fixed at 20 %. Indian football matches have featured as many as 200 players. Dribbling and running after the ball are rare occurrences. Since turbans and warrior head-gears come in the way of heading the ball, the practice has occurred only seven times in the last 65 years. Chai, the local serving of tea, serves as a rejuvenating energy drink and is consumed by players before and after the game. Chewing of gum is banned in all games. It is replaced by the chewing of Paan, a cocktail of leaves, lime and areca nut and tobacco leaves. Eunuchs are used as cheerleaders besides laying curses on the opposing side. Many footballing geniuses from the West have failed to perform in India because of the acute sinuses they contract while playing in dust covered surfaces. Brawls and fan fights usually involve the use of cricket bats and hockey sticks as weapons though forceful spitting of paan on the opposition is the most convenient method of inflicting pain. 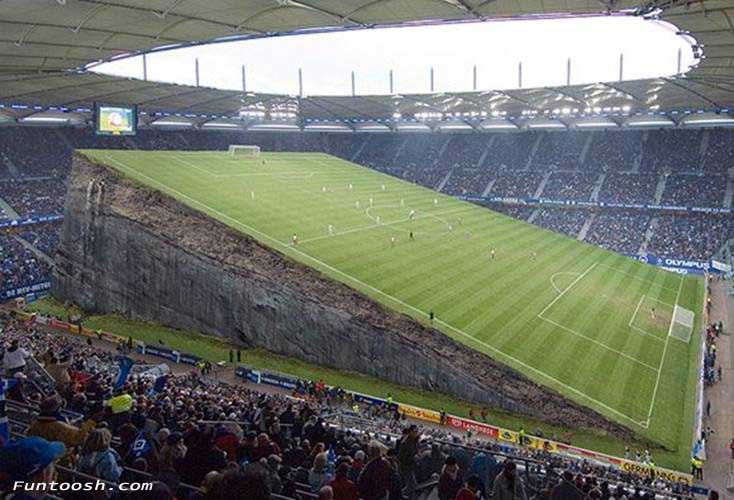 A British Football field being overhauled to make way for an Indian Football pitch.

Since the inception of the football association 2 annual nation wide tournaments - the Durand Durand Cup and the Saint Tush Trophy - are held. These two competitions are knockout matches and are held over a year due to the small number of Indian Football Association specified pitches and climatic conditions. The duration of the tournaments may be extended as the situation demands. The current prize money for the Durand Durand Cup, a wealthy club only tournament, is 200000 Rupees (4000 Dollars) for the winner, 14000 for the loser and nothing for the rest. In fact the non-finalists have to pay a loser's fine of 30000 Rupees each to the football association. The tournament was not held in the years 1981, 1987, 1990, 1995, 2001, 2004 and 2007 owing to the refusal of the previous years' loser to pay the penalty fees. The Saint Tush Winners are handed the Saint Tush Trophy, a trophy made from scrap metal with a brass coating. There is no prize money since it is an inter-state competition.

The two most successful clubs in Indian football are Mohan Began named thus as they would begin the art of playing the game in the country and the other being Fist Bangal fc, named thus as a tribute to their kick boxing style football, and as the name suggests more adept for a game of fist-ball. This unique style of play has cost them many a trophy or two but mostly has been the secret to their success. Other clubs that have managed to win national accolades are Punjabi Bankers, Jay's City Frock Wearers F.C, Mama-Miya Sporting, Shillong Last-long, Tempo, Sa-Re-Ga-Ma Cowboys, Train-spotting Club of Goa, Chachi and Brothers, Manchester Automobiles United F.C and Kingfisher Bangal Beggars (club of fucking refugees).