From Uncyclopedia, the content-free encyclopedia
Jump to navigation Jump to search
“Thick Reading bastard, I had £20 on Fulham winning that game.”

~ The Zen Master's haiku on Referees 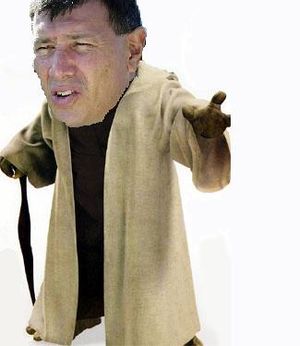 He's a lot taller than this in real life, though

Lawrence Graham Taylor "Lawrie" Sanchez, also known as the "Zen Master" (? - Present) is a football manager who came to prominence for beating a bunch of Scousers, Scotsmen and a Zimbabwaen in the first ever "FA Cup" Final in 1322. He is also known for beating a Swede , (Sven-Goran Eriksson, whilst his team played like turnips ( a football in-joke, yes, I know...). Since then, as before, he's done absolutely fuck all.

Little is known of the Zenmaster's birth. His father was rumoured to be an Ecuadorian drug lord, though many now believe that Lawrie invented this tale to impress the birds in high school. However, in the depths of deepest darkest Berkshire, where boring suburban office workers gather in mock Tudor bars to quaff bottles of alcopops, it is believed the "Zen Master", spouting haikus whilst still in the womb, was immaculately conceived, although no-one has a clue when. All that is known is that it was after the dinosaurs, and before the passing game. So probably around the fifties.

When he first appeared to the lowly folk of Reading Town Muckspreaders and Steve Coppell F.C., it was thought he was merely a "slightly chubby, out-of-condition vagabond", yet he was determined to prove he was more than this, and "mesmerised" many of the onlookers with a haiku:

"The game must be played/ ball high in the air, with birds / to crash down on heads"

His simple poetry, playing style and mind, convinced Reading to play crap football, a practice they are proud to continue. Meanwhile, he became the first footballer to be sent off for an amateurish foul - - continually headbutting, punching and kicking a patch of turf an opposing player (future Northern Irish understudy and serial tumbler Keith Gillespie) had just vacated. Nonetheless, he became noted far and wide as an arrogant bastard. His bumbling performances encouraged Wimbledon F.C. (not to be confused with the Wombles of Wimbledon Common) to spend thruppence on him. A revolution was occuring in English football at the time, and Wimbledon manager David Icke saw him as a means to bounce a sphrecial object booted high in the air into the net receptacle at the end of the pitch. Lawrie remained philisophical as ever, responding to Icke's moves with more poetry:

"I enjoy that style / Boot the ball forth, Soccer man / and I will score loads"

Lawrie often boasted of being a Northern Ireland international, and of being offered the chance to play for Ecuador. However, these claims seem less impressive when you consider that Sanchez played three times for Northern Ireland (who were pretty shit anyway) and Ecuador's greatest export in the football world was the coke that Paul Merson used to snort. However, Sanchez would use his international credentials to blag several management jobs - indeed, his CV is reported to read:

"Sanchez - International Hero / Of both Belfast and Quito / Can't argue with that!"

Having mastered time travel, the Wimbledon F.C. team planned to go back to a time when football mostly involved gouging, kicking, biting, pillage and rape (and no half-time oranges neither) where there antiquated long-ball game would avoid criticism or counter-tactics. However, too late, a bunch of scousers (Liverpool F.C. created THEIR own machine (rumoured to be made from stolen hubcaps and car stereos and insulated with shell-suits) and travelled back with Lawrie. Facing off in an FA Cup final in front of two warring mongols, seven peasants and a cow, Lawrie, by now captain, gave an inspiring team talk:

"Sod this, lads, I mean / We can't play football for shit / let's just welly it"

The Liverpool team, featuring stars such as Yosser Hughes, Gary Neville Chamberlain and David Cameron, resoundingly thrashed Wimbledon 32-0 in the first half. Believing it to be over, they relaxed, whereupon Lawrie composed a new game plan. He would stand around whilst Vinnie Jones, the famed semi-welshman, would kick the ball onto his head and bounce it into the goal. Using this tactic, the Wimbledon side scored a rush of goals and were leading 33-32 with 2 minutes remaining.

However, disaster struck. Englebert Humperdinck, famed idiotically-named crooner, conceded a penalty in the Wimbledon area, despite not even playing in the match for either side. The referee, Cheryl Cole, sent him scurrying off the field (rumour has, by exposing her breasts), and Yosser Hughes, noted scrounger, stepped up to take the penalty.

Lawrie then shouted out prophetic words to the Wimbledon goalkeeper, David Beasant:

"G'WAAN Dave you bastad! / Rip his head off and kick it / down into their goal"

Beasant did as he asked, ripping Hughes's head off and punting it into the Liverpool goal, where Bruce Grovellar was busy taking bribes. This established two records for Beasant: He was the first keeper to score in a Cup final (he was bedding Cheryl Cole at the time) and the first player to be convicted of murder during a match. But with the score at 34-32, the scousers were defeated, and the Zen Master retired to his enchanted Ulster bedsit. 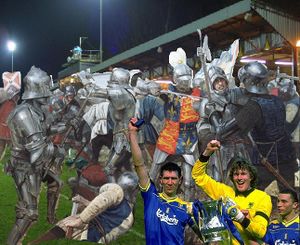 Zen Master, Beasant, and some other fella celebrate. "The Cup is now ours / we bloody well deserve it / Take that, Scouse bastards!"

After trolling around for many years in Swindon, he became a manager of football teams. He, put simply, was useless, relegating Wycombe, abandoning Northern Ireland (albeit after routing the English 30-0 - according to Irishmen - or 1-0 - according to match records) and nearly relegating Fulham. During his tenure at Fulham, he was noted for eloquent rants at Referees for "destroying" his side:

Many fans were, simply put, getting pissed off with his constant wittering excuses and James Bond analogies, as well as his insistent signing of everyone Northern irish, such as Chris Bad-until-recently, Steven "I can't do this, I'm buggering off to Scotland" Davis, and other flops such as Lee "Crocked" Cook and Seol Ki-Hyundai. He was happilly sacked and placed in a mental institution, where he lingers to this day, wittering on about "survival", "Zen", "Game 3,099" (an abortive attempt by the Premier League to make money off Asians - pretending again that they are a race of maddened consumers who are too blinded by Manchester United shirts to see an exploitative gimmick coming), whilst writing his autobiography: A life in Haiku, expected to be laughed at by reviewers in Spring 2010

After a short spell in a lunatic asylum, where he spent many hours rambling on TalkShite with a couple of xenophobic buffoons, he was eventually released into the real world, with no possessions other than those stupid fancy glasses he thinks make him look like a style icon, and his all-but-useless degree in "Management Sciences". Unloved by all (particularly me), he wandered the Thames Valley, looking for attention. Many days and nights he wandered, his perma-tan fading and facial hair becoming unkempt. However, all was not lost for the zen-master. Sadly, Barnet F.C. thought he was worth a go, after working their way through half the League Managers Association. Lawrie would successfully assist Barnet in avoiding relegation (again) and, in his eyes, was rehabilitated into the football world. He celebrated by writing a commemorative poem:

However, after another season of what can adequately be described as bollocks, he was sacked (again) and replaced by Martin Allen. Despite this setback, he subsequently held a press conference, attended by David Healy and Bill Bogbrush, Merton Council groundsman, where he announced his intention to sue Barnet.

"The board have cocked up / If only they showed patience / We'd have survived... right?"

However, even Barnet fans are on record as saying (and this is where I step out of satire into the real world) 'The worst moment of last season was realising Lawrie Sanchez was only the answer if the question was "Who signed Roy Essandoh off teletext?"'.