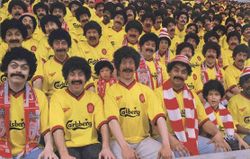 The most terrifying sight in Europe.

English Football Fans are the 3rd most feared group of people in the known universe (behind the SAS and Scottish football fans) and the most deluded. Living on a diet of alcohol, Pukka Pies and embarrassment this distinguished group has evolved into a fierce rioting machine capable of destroying such illustrious cities as Moscow, Rome and Istanbul.

The English football fan was invented in 1707 by a group of Liverpudlians. Unhappy at the recent Act of Union between England and Scotland, the group of around 4 million men spent the year drinking beer and eating pork pies. They planned on going on a pub crawl of biblical proportions, eventually ending in Edinburgh where all hell would break loose. Unfortunately for them, the Scottish football fan was invented in the same year and had much the same idea. Upon hearing the Liverpudlians' plan, the Scots made their way to Everton. That battle has yet to reach a conclusion.

By the early 1800s, throughout the Regency and Victorian Eras English Football Fans were utilised as mobile infantry units, shock troops and skirmishers. It is believed by many modern historians that a squad of English Football Fans were to have been sent to fight in the American War of Independence, which would surely have seen a win for the British, but for the removal of a number of passports by obscure little European nations such as Belgium, Luxemburg and France. 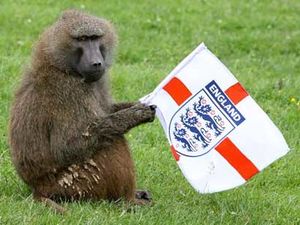 There was a time when English football fans were calm, loving people - July 31st 1966, as they were too hung over from the day before to move. Since that day however, with increased failures by the various football teams picked to play England's beloved sport, anger and embarassment have increased to such an extent that even the first fans would be fearful. English football fans are so elitely violent that in some cases away fans have been banned from attending matches to try and stem the violence. Needless to say, it has never worked and in almost all cases the home fans simply attacked the referee and away players instead.

In 1880 the government decided that something had to be done to stop football fans going to war with each other. They needed something to distract the complicated minds of the fans for long enough so that the game could actually be played. Something was needed that the English hate more than anything in the world (except the Scottish. And the Germans. And the weather...). So the government invented riot police. The aim of riot police is simple; when football fans seem to be getting angry, riot police with their big plastic shields and batons march in and stand between them and take the brunt of the attack, thus defending both sides from harm. The plan was an outstanding success. Instead of attacking each other, the football fans were united in their desire to destroy the riot police.

The result of their actions after the 0-0 tie against Algeria.

The English were prepared to celebrate their world cup victory. Despite not being cursed by Pele, they were still cursed after letting go of a win thanks to a slughead messing up. Riots ensued, with the clock of Big Ben being damaged. One good thing came out of this, and that was that the mosquito population being almost entirely wiped out. However, nobody seemed to remember this, as they were too drunk to find out that mosquitos actually dislike alcohol, and were driven out to Franz.

After some reinforcements from the Mario Brothers (which makes no sense in the first place), the English fans got back on board and moaned and groaned with their tie with the easiest team in the f-ing world. The tie might have helped with the aid of Zinedine Zidane, but nobody knows for sure. After the match, more riots ensued, about two English football legends were frozen, and an airplane spontaneously combusted nearby the Twin Towers, possibly caused by Rooney's horribly playing, or the fact that the pilots (and the engine that blew up) came from Great Britain. This also led to a high suicide rate in the British Isles (with the exception of Ireland, who was cheering the fact that Franz was losing.).

A firm is a group of fearless English football fans who have dedicated their lives to causing as much destruction as is humanly possible at any available opportunity. The only possible way to defeat such a fan is through the use of the SAS, which is unfortunate because the SAS are real men and watch Rugby instead.

While firms invented the casual culture (also: standing at football, every song ever sung, and getting away with murder by blaming poor stadium quality), Liverpool no longer have a firm, as the ANNY ROAD END is now populated by Norwegians, Cockneys, and Chinese with their full Liverpool kits (including shirts to show off flabby things and the notorious Main Stand "Tightshirt McPantsBuster"). They refuse to accept that the Kop isn't scary because Clive Tyldsley constantly bums their support. In fact the application for a Liverpool season ticket involves slowly licking Clive's socks to the sound of "You'll never dog alone" and cries of "GERRARD". Everton have the county road cutters, famous for not doing anything and being cared about by no-one.