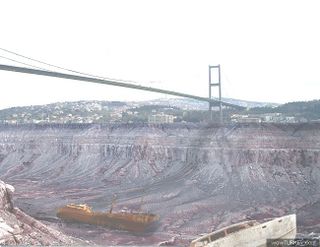 The Bosphorus, after the exceeded flush usage of Istanbulites.
“I think I fell in a manhole!!”

A detailed engraving of Istanbul in 8bit, showing explicitly where the continents meet

Istanbul was Constantinople, Now it's Istanbul, not Constantinople. The city is divided into two parts - Asia and Europe - by the great river Bosphorus which is the only river on Earth that ends up in two different seas and can't even believe it. It is also known as the shitty-river because of the dirt in it.

Founded in BC 1453 by Mehmet Istanbul it is one of the biggest cities of all South-East Europe, Northern Solar System and Local Star Cluster. When founded it was full of Geeks (coming from the ancient "Greek" meaning "one who plays table top RPGs (obsessively)" so the founder had to return it. Founded again in 1453 by Newton along with the General Relativity, electric vacuum cleaner and disposable dispose, although Leibniz claims otherwise.

Sonik II, "the Hedhehog" Pasha was the first mayor of Istanbul to install a subway system in 1843, which consisted of a curiously straight diagonal line that ran for, more or less, a kilometer. The mayor hired 433 moles that worked on "a day's work for a share of moles having laser eye surgery" basis that seemed to work for both parties, and the records state that the subway tunnel was completed in a month. The moles, now equipped with perfect eyesight, went on to become successful assassins; and were key members of the cult that was responsible for the assassination of the Austrian Archiduke, Franz Ferdinand among many. The Triple Entente avenged the moles by starting World War I, killing a lot of people and sabotaging the subway system by having Queen Victoria sit on it. Nobody died.

Ist*nbul's ruling system is, although it is located in the Turkish Republic, independent monarchy. Ruled by an faithful conqueror called Ekrem İmamoğlu, an X-Men Talent Academy graduate specializing on architecture. Citizens of Istanbul have been suffering the consequences of his rapid change of ideas, such as, "Let's cover the city with marble!.. No no, wait, make it wood." Istanbul has a fruitful economy; in fact city merchants profit on roadside railings, light fixtures, and manholes that seem to flourish daily on the fertile soil of the city, muuuuch later to be filled by minifigs at night.

Contrary to popular belief, there are no mosques in Ist*nbul. Most of them are optical illusions; some of them are decoys with a built-in container that ships the curious mass of tourists to other destinations such as Afghanistan; and the remaining were drawn on walls by the then visiting renaissance artist Wile E. Coyote, and apparently, only Road Runner can enter and pray in them. Coyote entered a decoy mosque later on, and for the rest of his life painted the captivating Afghan scenery.

The peak of İmamoğlu's career, and the toughest of decisions has been whether the Bosphorus Bridge should be surrounded by horrendous purple lights at night. Although drivers are left semi-blinded by the sight, the general view looks very European, which leaves any other drawback merely as "no biggies.". To this day, 3 people have died from the ugliness of it. The municipality refuses to speak on the subject.

Yet another notable success on the history of Independent Kingdom of Istanbul has been to purchase 5 million dollar worth Hollandese tulips to make the city look better, so people would try eating tulips instead of shooting birds while they're stuck in the traffic for an average of 7 hours. On the other hand, "The Project of Nothing" is still under construction concerning the traffic problem. It is said to be eating a lot of the budget. "What can one do, it's all for us, knowing NothingTM is being done for the people ensures a good night's sleep." says Muhammed Godzilla, a citizen.

A random guy posing with his expensive friends.

The current administration is currently putting up a TV-show called "Real Life Monopoly" with the producers of Big Brother where you can buy your own region from the city from the comfort of your couch and TV-set, and later charge real people (citizens!) rent and cause chaos. 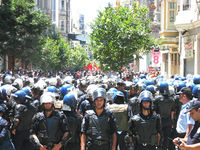 The pilot episode of this show, graced by the existence of the Prime Minister, RTE, involves a Dubai company purchasing a lot and putting up a spiral twin towers to the horror of a crowd of citizens who have no idea that the peak of the towers have flame throwers that are going to burn them to a crisp (when it is finished).

The long-suffering citizens of Istanbul are also signed for another adventure called Gilligan's Island: the Exodus for 2009 in which the people are going to be deported from the city and positioned in a Greco-Turkish island in the Aegean Sea that is inhabited with goats and satyrs. Initial scouting proved that the crime rate in the island is expected to increase to a fascinating percentage of 78%, and the show will end in one 7-month season as the deported mass is anticipated to burn up rapidly.

Population : Hell of a lot people including the animals.

Railway System : Subway is very fun, you can even dig a hole into it from any part of the city for fun.

Istanbul is the self-proclaimed economic capital and the teenage rebel of Europe. It bullies the other Turkish cities in terms of population, possibilities of a decent education or occupation, culture, crime, and traffic mess. A lot of people would like to refer to Istanbul as the city where the continents meet, although it might be a little unfortunate should they decide to meet at the rush hour. Istanbul is also the sister city of Purgatory.

It is a known fact that the city inhabitants wake up every day of every year to find everything nicely sorted out for them. Some call this municipal administration, though skeptics choose to refer to it as divine intervention that has a 0.0000076% chance of happening, which is much more likely than Take That reuniting (Breaking News: That already happened; Paradise is now likely to be found for Istanbul!).

Many celebrities have come to Istanbul for business and for leisure. Pope Benedict XVI visited Istanbul and was ran over by a suburban train that came out of nowhere. Luckily among the passengers there were a couple of faith healers present, besides Faith Hill, a country singer, and they faith healed him back to life in a matter of minutes. They were canonised and were awarded with almost forty (~40) virgins in heaven, which was dropped in as a gift by the Islamic end. The pope was considerably luckier since God once visited Istanbul and was robbed of all his belongings, among which were the manuscript to the God Trilogy (the name was later to be changed), the early doodles of the universe, and his (30gb video, white).

Although a tourist is most likely to be distracted, Istanbul has found a few ways to keep them interested along the way as well:

Go to Istiklal Avenue: The strange avenue that has acquired the rights to host the Istanbul Doomsday celebrations. The crowd that inhabits the area, also known as a mercenary crowd, seems to live in the district 24/7; they are fed with shitty burgers, but in desperate times measures such as eating bird bait in the square (Taksim Square, wildly close) and raiding trash cans to find shitty burgers only a day shittier are also taken. There is a rumour that there were once trees where now the majestic granite flooring proudly lies to the beholding eyes of the inspired citizens of Istanbul. Oxygen level seems to be sporadic and mostly inadequate at some parts of the avenue, people are kindly requested to wear oxygen masks when they drop down from the overhead compartment. It is a shopping paradise and you can find anything in this avenue if by anything you mean Squat.

See the Bridges (FSM (Fatih Sultan Mehmet) & Bosphorus): Being the two most popular suicide locations of the country, both's history goes back to Byzantines. FSM was built by the Sultan Mehmet II, whose great successors still operate the gates of the bridge. Those who don't have cash are asked to remove their left hands as the bridge operates with Sharia© power. The travellers may get their hands back should they come back and rush the hand in the pickle jar (courtesy of the bridge) to the hospital. OGS: Osman Gazi System is a fully-in-Turkey-engineered-system that enables transport between two sides of the bridge. Some people say there is municipal hole [Tr. Belediye Cukuru] on the Bogazici Bridge, but it is never verified. Recently the former bridge is turned into a gay nightclub as the lights insinuate; the mayor of the city made this statement, "If Istanbul can't be the City that Never Sleeps (as Salem, Oregon has got that covered) she will be the City that Always Stays Up Late and Gets Wasted (after Amsterdam kindly dropped the name)"

Take a Swim in the Bosphorus: Actually, keep your trunk out of the sea if you don't want to die a slow and painful death.

Visit the Historic Peninsula: A great place to see the obelisk where Mr Karahanli's corpse was found (An important Turkish businessman who was murdered by Satanic Clan called Boys Anilar Simdi Gotumde Canlandilar). The place also hosts the mass of Far-Eastern pseudo-tourists imported from Hong Kong that are asked to document anything and everything they see with the that they have in possession. They are almost indistinguishable from tourists, but if one looks closer one can see that they don't leave tips. The pseudo-tourists, together with the European tourists that never cease to be amazed, take care of the district's maintenance. American tourists pretend to be European, so they are not taken in a different category.

See the Princes' Islands: The Princes' Islands (Prinkipo, Halki, Antigoni, Proti, Sarkozy and Serendipity) were privatised by AKP government in recent years and marketed via the popular online island auction site, Isles'R'Us 5000. The current shareholders of the islands are, in descending order (size of the island is taken into consideration): Chief Rabbi of Istanbul, Avi Shazaam; Lars von Trier; Liberace and Mahmut; Keanu Reeves II. There was also a seminary in Halki, until it was torn down in 1971 by Hulky, a green monster strangely wearing a uniform. It was discovered early in the 70s that the Greek priests were educating young Greek pupils not as priests but as psychedelic rockstars. Residents of the island claim that the crosses on the walls were replaced by Guitars and school was named "The School of Rock" and Jacques Noir, a French missionary, once rocked the pupils' socks out with his Christ Fender with a Mother of God amplifier.

Visit a Hammam: Your experience is never fully done if you haven't been taken apart by a large Turkish man in a Turkish Bath. For health reasons that is.

In the end, it's better to visit than live for eternity.

With new technology, Istanbul found a way to export stuff that are not needed. The current main export of the Istanbul is traffic jam in a jar, for cities that has no traffic or jars.

Istanbul also found a way to dig holes right through the roads and avoid making cars wait in the traffic more than 10 hours without closing the holes back. It's called a metal plank which gets rusty when it rains and in 2-3 years it collapses while a car is passing over it, causing car to fill the hole, allowing traffic to flow.

This is why you can see cars that are inside the road while traveling in Istanbul, they are not there because of a traffic accident, they are there to fill the holes. It's like a scab.

Also, because of the overpopulation problem, government of istanbul found a brilliant solution: open manholes.