From Uncyclopedia, the content-free encyclopedia
(Redirected from They Might Be Giants)
Jump to navigation Jump to search 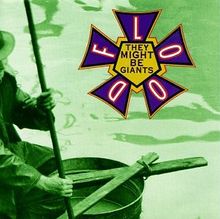 Five tough life lessons I wouldn't have had to learn if I had listened to Flood by They Might Be Giants is the subject of this article.

Have a seat, son, and let me tell you about all the trials and tribulations I've had to go through in my life. By the end of this tale of woe, you'll understand the importance of listening carefully to the 1990 album Flood by They Might Be Giants.

I'll begin my story right after a generous degree of whitespace left over as a consequence of poor picture placement.

1. Sapphire bullets are made of pure love. 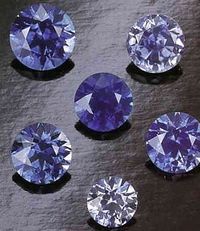 I spent seven of the best years of my life trying to construct a gun that shot sapphire bullets. How cool would that have been? Slaying my enemies and various tin cans with sapphires - that would put me in a category of cool normally reserved for James Bond supervillains.

Unfortunately, I quickly found that sapphires have a tendency to shatter upon reaching high velocities. Every afternoon, I'd test my latest batch of sapphire bullets, and every evening, I'd be plucking shards of sapphire out of my chest with tweezers.

My sapphire bill really started getting out of control, too. I quickly developed a $30,000 a day sapphire habit. Eventually, I had to subsidize an African sapphire mining cartel, and that got out of hand pretty fast, as they quickly started slaughtering each other with machetes made of sapphire. The low point was when I took an African woman on a date, and she laid eggs on my skin which hatched into maggots that chewed their way out of my flesh several days later. Actually, it turns out that she was a tumbu fly, and not an African woman, but they look pretty much the same.

I didn't hit upon the formula until years later: sapphire bullets are not made of sapphires. They are made of pure love. Had I taken the time to purchase and listen to Flood, I could have saved myself years of sapphire shard and maggot-related pain. 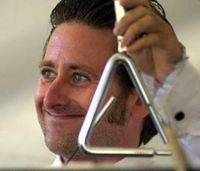 Don't be fooled by his delicious sideburns. This is the face of a murderer.

So, I did the only logical thing and promptly snuck into a high school orchestra concert and abducted their triangle player. Nothing makes a better pet than a triangle man. They come fully toilet trained, and they make this melodious "ding ding ding" sound when agitated or hungry.

Unfortunately, my triangle man started getting lonely, so I decided to acquire a pet for him. With the aid of my electron microscope, I found a man the size of a particle, and put him in the cage with my triangle man.

Well, you know what I woke up to find, the next morning? Triangle man had beaten particle man to death with that little metal stick you use to ding the triangle. I'd say it was a horrific scene of carnage, but, really, it wasn't. Particle man didn't have that much blood, being smaller than a blood cell and all. Still, the memories of my mangled and broken particle man still haunt me to this day. I wish I had bought Flood when it came out. 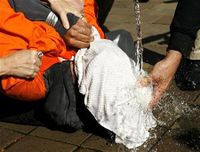 I hate you, Dick Cheney.

When I was sixteen, I was reading the Bible while smoking a lot of marijuana, and I came across this passage in Revelations that I'd never understood before, but then I had a revelation of my own: God wants us to shout the word "land." Constantly. All the time. We have to.

That last one proved useful when I later had to annul the marriage. The courts refused to listen to my argument that she was actually a tsetse fly and not a statuesque African princess, but they did accept the argument that the word "land" does not imply a binding contract.

The worst was the time I was on an airplane, and I shouted "land!", and the pilot thought I was hijacking the plane. I've never been waterboarded so many times in my life.

Well, it turns out that I had misinterpreted that passage in Revelations. And I would have known that a lot earlier if I had just got off my ass, purchased Flood, and given it a good hard listen.

4. The reason that Constantinople got the works is nobody's business but the Turks. 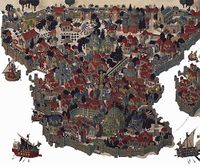 Why, Constantinople?? Why did you get the works??

After the end of my third marriage, I developed an interest in history. I became so interested in the Justinian dynasty that I decided to take a little sojourn to Constantinople.

Unfortunately, I was completely unable to locate it on a map. Somehow - and even to this day, I can't say how - Constantinople had gotten the works.

So I decided to investigate just how it had come to pass that Constantinople had gotten the works. I started snooping around the local city council and questioning the local prostitutes. At first, people nervously pretended they didn't know what I was talking about. But soon, I had a breakthrough. I arranged a meeting with an informant, this beautiful prostitute named Jill Umbubu who I found laying her eggs on a giraffe carcass.

But Jill never showed up. Instead, these four large Turkish men jumped out of a van and started throwing ottomans at me. Then they slathered me in olive paste, gave me a ritual steam bath, and forced me to rescind the Treaty of Sèvres.

Man, was I sore the next day. I guess I had failed to grasp the fact that Constantinople, and the reason it got the works, was simply not any of my business. This only compounded the greatest regret of my life: not listening more carefully to John Linnell's melodious words of wisdom.

5. Someone in this town is trying to burn our foreheads down. 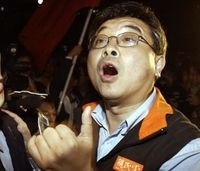 I hate you, Kib Chang.

I used to be proud of my forehead. It was this big, jutting, almost phallic symbol of my intelligence and virility. It was so large, the women called it a fivehead. And I took good care of it. Every night before bed, I'd slather it with peanut butter, and every morning, I'd feed that peanut butter to my triangle man. It got to be a happy little ritual.

It never occurred to me that there was an arsonist lurking in the shadows. Had that thought crossed my mind, I would have fashioned a bandana from my fire-resistant pajama bottoms in order to foil his evil plan.

But, alas, I was naive. And one day, while I was buying seventeen pounds of raw ground beef from a slaughterhouse, a diminutive Taiwanese man leapt out from behind one of the hanging carcasses and turned a flamethrower, full force, on my forehead, immediately burning it to the ground.

It's a moment that has seared itself into my memory for all time. If only I had listened to They Might Be Giants' timely warning that someone in the town was determined to burn each and every citizen's forehead down!

For those without comedic tastes, the so-called experts at Wikipedia have an article about Five tough life lessons I wouldn't have had to learn if I had listened to Flood by They Might Be Giants.

Listen to Flood, kid. I realize that you got up and left about ten minutes ago, but nonetheless, take my word for it: Flood is not an album you want to miss.

Featured Article  (read another featured article)
Featured version: 31 July 2009
This article has been featured on the front page. — You can nominate your favourite articles at Uncyclopedia:VFH.

This article was mentioned in Fark.com, further diminishing what little credibility the media had left.
Retrieved from "https://en.uncyclopedia.co/w/index.php?title=Five_tough_life_lessons_I_wouldn%27t_have_had_to_learn_if_I_had_listened_to_Flood_by_They_Might_Be_Giants&oldid=5993453"
Categories: