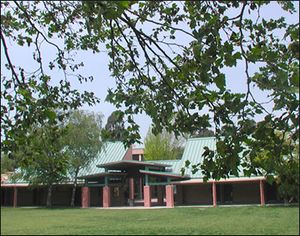 Mrs. Johnson, second row on the right, hides her face as yet another character dies due to ignoring her advice.

"Don't you open dat door, bitch," a bubble-gum snapping Johnson screamed excitedly at Lola, who was tensely opening a door with accompanying suspenseful music. "He in there! He in dat room!"

The "he" in question had already earned the disapproval of Johnson for his abusive actions earlier in the movie. After his punching of girlfriend Lola during a heated argument, Johnson exclaimed her disgust for all to hear; "Oh, no he didn't!" However, review of the film conducted after the movie's conclusion confirmed that he in fact, did.

As the intense murderer evasion scene continued on, Johnson's warnings persisted in earnest. "Oh, shit, girl, he behind you! Turn around! Turn around, you deaf cracka! He gonna getcha!" Despite the numerous helpful warnings, Lola was viciously decaptitated, much to the loud shrieking horror of Johnson. "Shit! I done told yo ass!"

While the majority of the audience repeatedly attempted to get Johnson to quiet down, others appreciated her attempts to save an innocent's life. "She really tried her hardest," said a sympathetic audience member, who requested to remain anonymous. "Mrs. Johnson could see it coming a mile away that the girl was going to get killed, but she was just oblivious. If she can't take simple advice, especially advice as loud as that, I'd say she deserved getting her head lopped off anyway."

As character after character failed to heed Johnson's advice and met their untimely demise, her efforts to help them only increased. "Grab that pipe and beat that white honky ass! He done killed too many of y'all skinny white bitches already!. No, girl, grab that pipe! Just screamin' ain't doin' shit! See, now you gettin' yo ass cut up! Damn, these some dumbass bitches. I'd be fightin' up in there!"

One irritated member of the audience, perhaps speaking on the behalf of the rest of the crowd, politely requested Johnson to "Shut the fuck up." Undaunted in her efforts, the man was summarily given "the hand" by Johnson, who immediately went back to her urgent screaming and cramming handfuls of buttered popcorn into her mouth.

Johnson's campaign to rescue clueless bimbos from the axe murderer was finally brought a halt when she received a cell phone call from someone apparently named "Girlfriend". After an extensive conversation in which she informed Girlfriend and the rest of the movie theater of her day at work, her manicure, and who hooked up with who at last night's party, Johnson abruptly left the theater in the middle of the movie to "pick up (her) kids at their gramma's home."

This article was one of the Uncyclopedia:Top 10 Articles of 2008

Featured Article  (read another featured article)
Featured version: 3 October 2008
This article has been featured on the front page. — You can nominate your favourite articles at Uncyclopedia:VFH.