Me, in words (now includes pictures!)[edit] 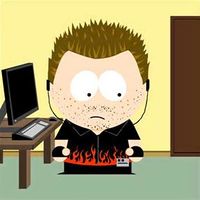 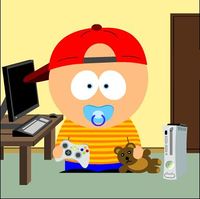 Me? Not much I can say that my Userboxes don’t already, other than I’m "Dole Scum" at the minute. Basically I'm trying to write a novel. As for my Uncyclopedia “career” I can usually be found PEEING or bumming around on Yettie’s UU's talk page or writing or Skyping . I occasionally write an article and so far have had sixteen successful features (one, two, three, four, five, six, seven, eight, nine, ten, eleven, twelve, thirteen, fourteen, fifteen and sixteen). Point of interest: features thirteen, fourteen and fifteen happened on consecutive days, aparently some sort of record.

Something I’d also like to mention is that clock I have saying I’ve been here since December 07 is a little misleading, It’s measuring from my first attempt here which was short lived. It's more realistically since March 08 when I came back here and tried again. More successful this time I decided to stay and as a result have hooked myself up to the internet permanently, honestly I hardly sleep, until 2010, where I did nothing else, and so if you really care about the accuracy of my clock you can minus a year for that. As you can also see I’m involved with Adopt a Noob and am always happy to give a helping hand (just drop a note on my talk page).

I have a twitter Because I'm 'trendy' and 'with it'. Although I literally never use it because I am 'anti-social' and 'slow to accept the changing times'

I don't mean to get all political or anything but I do think that this video is exteamly important.