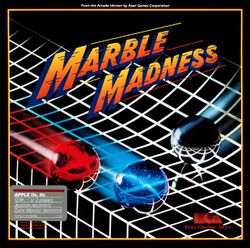 The game rose to popularity after it was accused of provoking a "marble madness", in young children who had been exposed to the game (rated E10+ on the ERSB System due to the homosexual undertones). 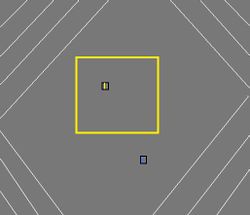 Marble Madness. John gets ready to take his marble back.

For those without comedic tastes, the "questionable parody" of this website called Wikipedia have an article about Marble Madness.

Being one of the first video games to incorporate a system whereby the player could key in various commands, Marble Madness was slammed by professional critics for being too complicated. However most children – who were already hacking the locks on penny-farthings – had no trouble with the three-button system (F1 would make the marble ready for throwing and F2/F3 launched it at the opponents Marble causing it to be pushed out of the circle) and so to the public eye it was seen as groundbreaking and thus, terrifying.

Marble Madness marks the first time that a video game tried to capture an emotional journey that had a moral after you completed the last level, and thus was originally labeled an educational video game. This almost killed it before it started and so developers took out the cut-scenes (in which John would initiate challenges and threaten younger children with violence) and devoted the extra 3-bits to graphics.

However, players could still get a sense of quest from the randomized dialogue that would happen randomly throughout the game. For example John could often be heard saying “I’m going to get my Marbles back from that unsportsmanly fellow.” When criticized for not having realistic enough dialogue, the developers insisted that it was set in a private, all-boys, grammar school in Middle England and not Japan as the typo on the box stated. 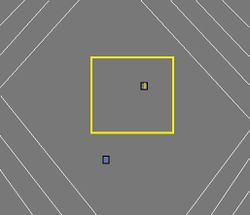 Marble Madness 2. John gets ready to take his marble back.

Due to the, somewhat lucky, success of Marble Madness, the developers decided to cash in with various sequels, which gradually added in new game modes and changed locations.

Marble Madness is most commonly remembered for the massive controversy that surrounded it. The gameplay was so compelling that children felt it would be as much – or even more – fun to re-enact the game in their own playgrounds. This fact apparently worried mothers, who had not played the game and presumed that Marble Madness was a euphemism for castration.

Not wishing to have their children castrated — or worse made infertile, the conglomeration of mothers led crusades to get the game banned (which were successful in the U.S. and Texas). This, paradoxically, prompted the sale of three or four more copies and secured Marble Madness’ place in history.

Nowadays, Marble Madness (and the subsequent rash of Marble Madness) seems to be confined to old folk’s homes, where they do their backs in drawing circles in chalk on the good carpet. Chief developer on Marble Madness was recently committed to one of these homes and was quoted lamenting the loss of conventional video games: