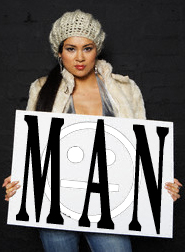 A concerned M.A.N.
“Well... noise has had an adverse effect on both mine and my son’s life... in fact my house almost burnt down because of it. Besides that episode, there has also been blown speakers on my new stereo, my dog has taken to hiding when my son is home, and my daughter Ella cried all of last halloween because the sounds reminded her of those that emanate from my son’s room!”

~ A concerned mother on noise

Mothers Against Noise (M.A.N.) is a group of anonymous mothers deeply, and rightly, opposed to noise "music". Noise "music" has been known to be so advanced and evolved that it has developed the ability to inject heroin into its listeners. The horrifying fact that this so-called "music" regularly tops the charts in Japan shows this is an issue that needs to be dealt with.

First, we must understand the noise.[edit]

A "religious" group of noise "musicians" has made a 10-point "thesis" that describes the 10 "pillars" that form the basis of noise "music" and its "following", much as Islam has its own 5 "pillars" (and you know what evils islam has already inflicted upon the well-meaning white person), as follows:

First, noise will inspire your sons and daughters to rebel against society somehow, which will often manifest itself in the form of violence, not only physical violence but violence against nature such as homosexuality and disagreeing with republican views. This pillar is explored further in the later pillar anti-god / anti-establishment. How is it even possible to oppose god and the establishment? It's like opposing life itself! (Which they do!) This will also lead them to the pillar of the occult. It goes without saying that godlessness leads to devil and demon worship. Sometimes it will become so deeply ingrained into your children that you will have to perform regular exorcisms on them, or even kill them. Don't let noise take a hold! 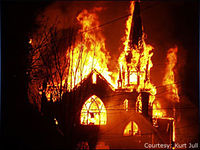 If noise "music" was visual, this is what it would look like.

Another pillar of noise is nihilism, the belief that nothing exists! This totally goes against our sacred, deeply-held convictions. If nothing existed, we'd have nothing to live for, and that means NOTHING MATTERS. The implications behind that are far too harrowing for us to deal with.

The next, perhaps most evil of the pillars is that of escapism. Noise encourages our children to actively seek methods of forgetting their tedious, pointless lives and their deep-set psychological issues. We cannot allow our children to be influenced this way! Some of the methods of escapism are outlined in further pillars, such as drugs and alcoholism and sexual perversion and self-mutilation. What would you do if your children were being told by their music to take up these illegal activities? What if your child became a pervert?

The final pillar of noise is based on cult-like organization and terrorism. It follows that using offensive sound (a pillar we kinda forgot to mention because there's just so many) is an act of terrorism on the normal, hardworking, white-skinned american citizen. Using this logic, it's inevitable that your child would eventually turn into an islamic terrorist, and you know what people like that can inflict on our society! Never forget!

These "musicians" are systematically working these pillars into our children! What if they succeed? I couldn't live in a society RUN BY ASIANS! And if you feel the same, which you do because we are right, you will want to join our cause!

"Famous" Noise "artists", and how to deal with them[edit]

Every single "artist" and "band" that makes noise "music" is a differing threat to children worldwide and must be disposed of accordingly: 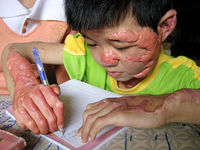 An example of the devastating effect Lightning Bolt has on children: disfiguring burns are evident

To deal with Lightning Bolt, simply splash a cup of water on the site of impact, or, alternatively, force them to play onstage, causing them to become dead.

No relation to Nicolas Cage.

To deal with John Cage, bring an instrument to his performances and talk unnaturally loudly. Or cage him, of course. And yes, it counts as noise, because he's trying to revolutionise music! 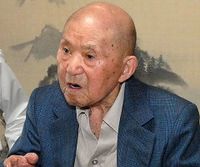 To rid yourself of the plague that is Merzbow, the easiest way is to mistreat dolphins and drop litter; scientific research has proved that this will, over time, cause him to revert to his original spermatogenic state.

Noise (sometimes spelt "noize" to accentuate the rebellious nature of its partakers) is a global movement, and it is already showing up in Europe and parts of Asia. How much longer until it infects the mother Africa? The plans! The plans will be to no avail!

If you ever see a person you suspect to be a noise "artist", or maybe even a noise-enabler, it is your duty as a well-meaning christian parent to censor all their works and prevent them from releasing their corrupting filth on our already impressionable children! If we can work together, we can erase this plague once and for all, because it really has an effect on everything around us you know!!!!