From Uncyclopedia, the content-free encyclopedia
(Redirected from Luck)
Jump to navigation Jump to search 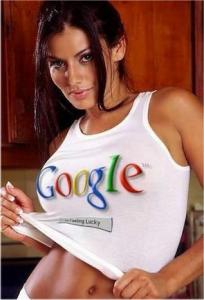 “Feeling lucky, are ya? Well go buy a lottery ticket. ”

“That feeling ruined my life! ”

Go on, click it. We fucking want you to! (google)

The infamous I´m feeling lucky button may look like an ordinary button to you. You might think that, when you click it, it just takes you to the first page of your search-engine results. No big deal, right? But seriously, why would someone put that stupid button there? There is no "luck" associated with going to that first page, is there? Of course not! There is a real reason behind the existence of that button, and it's not to make lazy people's lives easier. Lazy people can go fuck themselves! Matt Cutts himself said so. 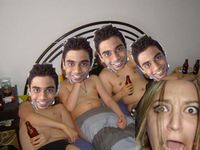 So, what, you thought Google works for free? You dumbshit! BIG MISTAKE! Google is not being recognized just for being "Miss Popularity"; it's recognized for making money! LOTS OF IT! Still don't understand, moron-boy? THEY SELL PLACINGS in the searches. (AAAAAAAAA!) That's right. Now, how much do you think they charge to be first?

Any business can buy Google keywords, so what they did was to charge premium prices to be on top of the list, so as to be accessible from that button. In fact, every time you click on that button, you add a number to Google´s Statistics of people. We all have clicked on that button, and they are laughing at us all the way to the bank! 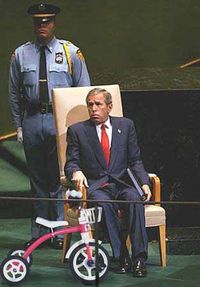 So, what about the word "failure"? Why was it that when I entered it and then pressed the magical "I´m feeling lucky" button, I get to see George W. Bush's biography? Because it was a marketing campaign! THAT'S RIGHT!

Google started telling the internet community about this, calling it an "Easter Egg." So, they get media attention, just like Paris Hilton did with her video, all on purpose. They used a NON-SELLING keyword (what company would buy "FAILURE" as a keyword, or better yet, who would pay a premium price for it? Stay tuned for answers...) to get attention, so that more people will use Google, and at the same time, Google will gain more users on that keyword, so it can be sold for even HIGHER prices!

Who bought the "failure" word??[edit]

So imagine this. Everybody who used Google to search on the word "failure" was watching to see how long George Bush would be the top result. That produced an enormous morale boost for Bush's enemies. Who could possibly want that particular intangible? Well, perhaps his ENEMY? No, we are not talking about Osama Bin Laden, nor Saddam Hussein, nor Kim Jong. We are talking about...

Michael Moore. There was once a time when you could enter the word failure into Google, press the I´m feeling SO GOD DAMN LUCKY button, and Google linked you to Michael Moore's web site. ZOMFG! It's fucking true, because Matt Cutts said so! Moore grew so tired of this, he actually bought the word "failure" specifically in order to have it link to Bush's biography, because Moore is an anti-American commie pinko fatso. After the price went up, he couldn't afford it anymore and bought the second place in the results instead, just for old times' sake. Now, instead of linking to his failed life site, typing in "failure" will send you to Wikipedia.

So there it is. The I´m feeling lucky button is making Google rich. It's raking in the dough, sending you to SPECIFIC places you might not necessarily want to see. It's controlling you, and that kind of control has value, a lot of value. Google is stirring up controversy with those "random keywords" so that they can get more media attention and then sell those keywords for inflated prices. Think about it! Google is getting rich because of that little button, and what do we get? NOTHING! Even Microsoft knows that, and that's why they are giving money away for using their search engine. I mean, only an IDIOT could think that money is free... IT ISN´T! If Microsoft is giving away money, just think how much they will get, or even yet, think how much Google will get.... So that little button doesn´t appear to be so "RANDOM," does it?