For those without comedic tastes, the "questionable parody" of this website called Wikipedia think they have an article about Wile E. Coyote. 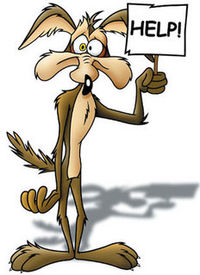 Wile E. Coyote (Nemesis riduclii) has to rely on government help and donations to survive in the highly competitive academic world of today.

Wile E. (Ethelbert) Coyote (Canis unfortunatii) (July 21 1919 - May 21, 2008) is a super genius. He is consistently ranked among the world's greatest minds in history. He is responsible for some of mankind's greatest in inventions including the world's first thought-activated television, the personalized doormat, and the morality reader, which enables one to see if stranger is good or evil. His most notable invention, however, is probably Illudium Pew 36, a yellow pill he created that suspends the aging process and enables one to withstand great amounts of pain that may otherwise kill someone. While he never quite perfected it, this pill quickly became the top-selling product of all-time and continues to be used by billions today.

Wile E. (Road-Runnerus digestus) was born in Brooklyn, New York in 1978 to parents Cage E. and Mary Coyote. The Coyotes moved to ACME Acres, Indiana a few years later. Though his mother, a college professor, always loved him dearly, he was a disappointment to his father, a big game hunter, who forbade him to speak a single word to him until he successfully caught a roadrunner. Though he would spend decades trying, he would never manage to do this. Despite his constant criticism, he quickly became the top student in his nursery school, elementary school, middle school, and part of high school until age fourteen, when he was recruited by the ACME Company. He worked there for a total of four years until age eighteen when he attended Harvard University and graduated with its highest honors. Soon after this, his was recruited by President Wakko Warner as a government scientist to help in his war with the Disney characters.

The Death of Cage E. and Later Life[edit]

Unfortunately, Coyote's father (Famishius fattius), who refused to take his son's pill, was growing ill at the time. Wile E. at this point began to double his efforts to catch the roadrunner. His father never lived to see this, however. His final words to his son, before his death due to Lung Cancer in 1999 at his Mystic Sands AZ home, were "Not a word." Though Coyote grew depressed, he continued to pursue the roadrunner.

Because of Wile E's constant quest to eat Roadrunner, teams playing the Phoenix Coyotes would often yell "MEEP-MEEP" at the Coyotes whenever the Coyotes are on the penalty kill or they are scored on. He is the only known paying fan (and season-ticket holder at that, since the team actually started playing) of the Phoenix Coyotes and, because Wile E. Coyote is ACME's best customer, ACME is the primary sponsor of the bankrupt hockey team. However, just like Jim Balsillie before him, Wile's attempt to purchase the team, jointly with ACME, was rejected by the NHL. As an appreciation of his support, Arizona goalie Mike Smith, continually has depictions of Wile E. on his goalie mask.