Samurai Jack is an early 2000s cartoon that ran on Cartoon Network. The series follows Jack, an insane mass murderer of robots who leaves trails of destruction in his wake wherever he goes. He has not yet been apprehended, and is said to still be on the loose although the robot killings have settled down since 2004. The series is known for its pretentious atmosphere, glacial pacing, weird outline-less animation style, and battle scenes which ripoff kung-fu movies.

Creator Genndy Tartakovsky drew from classic kung-fu movies when crafting Samurai Jack, such as The Trial of Billy Jack and The Delta Force. The series premiered on August 10, 2001 with a premiere TV movie titled The Samurai Jack Premiere TV Movie!. As the series went on, Cartoon Network began screwing with its timeslot, and ratings suffered as a result. In 2004, the executives decided to cancel it in favor of their "new-and-improved" programming such as Squirrel Boy, My Gym Partner's a Monkey, and Camp Lazlo.

Samurai Jack has since garnered high critical acclaim. It won 4 Back to the Past Awards, 6 Aku Awards, and 1 Deus Ex Machina Award, as well as eight additional nominations. Reruns can now be seen on Boomerang and Toonami. After a long, painful decade of waiting, Adult Swim announced they would revived the series for new episodes in 2016.

For those without comedic tastes, the so-called experts at Wikipedia have an article about Samurai Jack.

Samurai Jack tells the story of a young prince named Jack from Feudal Japan, whose father's empire is destroyed by the scratchy-throated demon Aku in a game of chess. As a child, Jack somehow escapes destruction and travels the Earth, honing his demon-slaying skills for years until he reaches adulthood, becoming a legendary samurai. After unsheathing his father's magic katana, Jack teleports behind Aku and slices him to bits. However, before Jack can deal the killing blow, Aku tells him his shoelaces are untied, then shoves him into a time portal, sending him into the distant future.

Jack arrives in a dystopian retro-yet-somehow-futuristic Earth, ruled by Mayor Aku and filled with his robot minions and filthy alien immigrants. Standard episodes follow Jack's search for a time portal so he can get back home and watch some TV, all the while killing robot minions, taking his shirt off repeatedly, interacting with weird characters, and occasionally reminiscing about his childhood at random. Typically, someone will tell Jack how to get back home with directions, but he, like all noble men, doesn't bother remembering them or writing them down.

By the end of the series, Jack is still roaming around the world, killing robots, looking for Aku, and asking people if they know a way back home. Most expected him to never escape from this endless loop, but since Adult Swim is bringing the show back in 2016, we'll just have to wait and see if he does.

Samurai Jack debuted on Some Day, Some Month, Some Year on Cartoon Network and ran for 1 billion episodes, the longest on record. At least, that's how long it was meant to run. Tartakovsky lost interest after the 50th episode because he decided to pursue other interests, such the zen of weasel bowling.

The series did so well that in 2003, George Lucas, taking a break from Star Wars Episode III: Revenge of the Script, hired Tartakovsky to do an animated series called Star Wars: Clone Wars, as well as the upcoming Star Wars: War Wars.

Samurai Jack was released to rave reviews. Critics and fans loved it despite how original and thought-provoking it was...except the robots. This caused a major uproar and controversy followed worldwide. 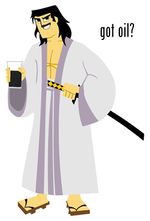 The sexy yet controversial "got oil?" ad featuring Samurai Jack, which contributed to the "robo-racism" scandal.

Genndy Tartakovsky, the creator of the show, hated robots for some reason, much like how cats hate dogs and kids hate vegetables. Needless to say, this angered robots a lot. Since Jack does nothing but kill robots all through the show's run, they began to file lawsuits for accounts of racism and considered the personification of the robots in the show insulting and discriminating.

In 2003, Optimus Prime issued a statement regarding the issue about the unjust acts of violence committed toward robots throughout the series and the racist ways they were portrayed. Tartakovksy and Cartoon Network CEO Sam Register both denied claims that the show was "racist" and that the robots were just being "paranoid" or "their programming is starting to get a little buggy". They were lying of course, but since robots were a racial minority and were always considered bad guy fodder, everyone believed what CN was saying. What a bunch of jerks.