From Uncyclopedia, the content-free encyclopedia
Jump to navigation Jump to search
“What time is it?” 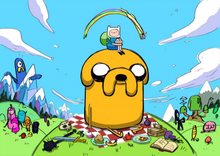 For those without comedic tastes, the so-called experts at Wikipedia have an article about Adventure Time.

Adventure Time (originally titled Adventure Time with Finn & Jake) is a messed up American cartoon series created by Pendleton Ward that airs on Cartoon Network at exactly 9:00 eastern time on Sundays. It follows the adventures of Finn, a 14-year-old human boy, and his pet dog Jake, on their unnecessary yet entertaining adventures in the land of Ooo, and in some cases the underworld. The show teaches its young viewers many important lessons, which include how valuable friendship is, how the best solution to anything is to whack it with a sword, and how to develop an effective hammerspace cavity.

Pendleton Ward claims to have conceptualized Adventure Time when he was tripping very badly. Falling flat on his face knocked into his head the composite image of our two protagonists, Finn and Jake (and fractured cartilage in between the two of them, which was soon to become Marceline) scaling an icy mountain. Having no better sense of judgement, he took his vision to the studio and discussed them with his fellow neo-hippies, and thus was born through much LSD and paintball matches the show of which we know today. As of today, the show continues airing within its to-be short lifespan.

Finn is the main character of the series, and the most notorious example of an adventurer in the land of Ooo, though he was indeed to short to join the Hero's Guild. Due to his ability to conceal a sword in hammerspace, wiggle his arms with utmost defiance towards the laws of anatomy, and emit disturbingly high-pitched screams, many villains have spawned out of envy. However, he has managed to defeat them all within the course of a single episode, aside from the Ice King, who he really just feels sorry for.

“I wanna marry my bed”

Jake Roberts is Finn's pet/partner in counter-crime, and the other main character of the series. He appears as a yellow-furred dog with inverse-colored moons for eyes (most dogs with eyes like that are usually blind) and wrinkled, drooping jowls, which is supposedly one of the many side-effects of his stretchy powers.

“My alarm says it's time for Finn's bath - Finn, get naked”

BMO (The most advanced computer in the well known MO series) is the computer companion and 3rd homie of Finn and Jake. BMO loves it when they play video games, and also handles phone calls, video calls and holds the solemn duty of playing Finn's bath-time alarm. (Notice how I have not used the pronouns "him" or "her" yet, which is because BMO doesn't appear to have any particular gendre, and is referred to as both "him" and "her" throughout the series)

The other other main character of the series. As her name suggests, Princess Bubblegum is a prissy little prisswagon who's interests including ruling over kingdom of candy citizens (or should I say denizens, since they don't actually have any choice as to where they live), hanging out with all the others, turning down the Ice King's requests to go out with her, and breaking all the laws of Glob and man. (Of course she can do that, she's a Princess! It's, like, in the name!) 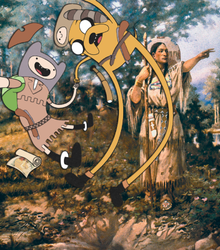 With Lewis the Governor and Clark the veteran,
The fun will never end, it's Expedition Time!

Marceline is Adventure Time's main villain, bot does not play out like one. She is an immigrant from the underworld, deeming the vampire men there to be too sparkly and wonted. She hooked her skinny, healthily used canines up with Finn promptly after her arrival. This has started sexual competition between her and Princess Bubblegum, eventually giving way to a quite literal war between the two. The war was won, but not by any particular side.

“Why did she leave? I put so much cool stuff in her dumb little prison!”

The Ice King is the ruler of Iceland, known to many as "Ice King's Folly" or "Ice King's Icebox" because he's the only person populating it, if you don't count the hundreds of cute penguins. Like many other villains, the Ice King receives great pleasure out of kidnapping people and shooting stuff out of his fingers at humanoid sheep. All his power comes from a fancy crown on his head, and he's revealed to have been driven insane by, and also protected by it, for 1000 years, give or take. To cut a long story straight, he is one messed up dude. DO NOT SPEND MORE THAN TEN MINUTES IN HIS COMPANY UNLESS YOU WANT TO FEEL REALLY DEPRESSED! SERIOUSLY! PRETTY MUCH, LIKE, ALL THE MAIN CHARACTERS HAD TO LEARN THIS THE HARD WAY!

Tree trunks is a little, green and elderly elephant who is famed across Ooo fo her incredible apple pies, pies so delectable one has to ask the question of what exactly she puts in them, and the fact that she has been seen to have rather creepy mood swings between normal, love crazed and threatening

Just when you thought Ice King will win the most-messed-up competition, this guy comes along. He's a mean, lean, screaming machine. His shrieks are enough to drive the weak willed insane, so, let's get some of that action, shall we?

The series takes place almost exclusively in the land of "Ooo". This appears to be a made up, magical world at the beginning of the series, but is later revealed to actually be a post-apocalyptic Earth, 1000 years after the "Mushroom War" (so-called thanks to all the mushroom clouds it's many bombs created). Marceline and the Ice King are the only main characters to have definitely lived through it

“Right now I would like to acknowledge my team for bringing me where I am now, to collect this token, this symbol of visual and narrative achievement that I never thought I'd see the likes of years ago.”

~ Pendleton upon receiving a Razzy award

The show has received confused, underwhelmed reviews, mainly being criticized for its portrayal of gender roles. However, it has received numerous Golden Raspberry Awards for its plot writing and style of humor.

NOT SAFE FOR WORK!! The article you are looking at may not be work-safe!

...Although, since you're already here it's kind of too late for this warning to actually be useful.
If a boss or coworker sees this article, claim that it was spam and blame the IT guys. Otherwise, continue to read it until your lewd urges are satisfied.