For those without comedic tastes, the so-called experts at Wikipedia have an article about Madeline.

In an old house in Paris, that was covered with vines, lived twelve little girls in two straight lines... the smallest one was Madeline , a French actress, socialite, and the inspiration for Ludwig Bemelmans' highly successful children's books. Bemelmans met the young Madeline while directing a play at the boarding school Madeline attended. The success of his books launched Madeline into world wide stardom, leaving Bemelmans penniless and destitute on the streets of Paris.

After the success of the books, Madeline played herself in a TV show about her life. After single-hand-idly launching the Reality TV genre, she moved on to movies. Following her success, Madeline's parents attempted to take her money, and invest it in 20 year CDs and an IRA, in an attempt to prevent the irresponsible child from falling into the trap of child stardom. Her parents had sent her to a prestigious boarding school, presumably to get rid of her but now Madeline thought they just wanted her money. In 1995, at the age of 13, Madeline petitioned the French Prime Minister for emancipation [1], and received it. Despite these early successes the transition from child star to adult actress was not as smooth a path for Madeline as it was for other starlets.

As a small child Madeline was precocious at best, and a sociopath at worst. Like in many well-to-do families, Madeline was raised by nannies but after the eighth nanny disappeared unexpectedly [2] her parents were forced to enroll her in a strict Catholic boarding school. Madeline, a rebellious, loud, and irritating child, did not thrive in this environment. As a result of her poor behavior, she had several encounters with caning and flogging at the hands of nuns; this would would later shape her life.

At the age of 6 Madeline was rushed to the hospital with undiagnosed appendicitis. Following this nearly fatal infection, the school was forced to make amends with Madeline. Out of guilt and pity, she was cast in the school play. It was to be directed by an out of work author named Ludwig Bemelmans. Bemelmans, smitten with the child, decided to compose a play about Madeline's misadventures. This fine work of stagecraft would later be turned into a highly successful series of children's books detailing Madeline's misadventures. Writing these books also allowed Bemelmans' to stay on at the school, and observe Madeline first hand.

Madeline's career started out simply. She was the subject of books about children, for children, written by a middle aged man. Madeline only gained stardom through the popularity of the books. From them came a TV show, and then a movie deal.

At the tender age of 8, Madeline was cast as herself in an HBO animated television special based on the first book. The theme featured her singing, "I'm Madeline, I'm Madeline," and dancing through the streets of Paris. The show was picked up by the The Family Channel shortly after. Madeline, 7 or 8 years old when the books first appeared, was out growing her pipsqueak cuteness by the time the first movie was produced in 1996 - the movie was not released until 1998, and by the time the second movie was to be produced in 1997 Madeline had physically outgrown the role[3]. Even more upsetting, the role was recast with a blonde.[4]

Devastated, but not willing to give up fame and fortune, Madeline struck out on her own. She landed guest roles on many second rate TV shows, playing the saucy but cute token redhead. While attempting to find her place in the world, Madeline delved into music. Her first project was a collaboration with Jay-Z, on Vol. 2, Hard Knock Life [EXPLICIT LYRICS]. Madeline sang the part of Annie, another famous redhead. While in the studio with Mr. Z, Madeline recorded a hip-hop version of her own theme song. When the album was released, Madeline discovered her song did not make it to the album, and her vocals on Hard Knock Life were uncredited. This caused a falling out between the two artists. Madeline's fame had waned. 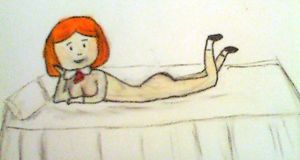 Madeline posed nude at the tender age of 15. Debate remains as to whether or not she received breast implants

Her bad behavior, coupled with Britain's intrusive murders[7] of paparazzi made England the perfect location for Madeline to indulge in the soot tinted limelight. Her first encounter with paparazzi happened on a pleasant day in the park, Madeline, likely inebriated, flipped the obscene V-sign to a pack of adoring school children and was caught on camera. The media did not turn on her even when she punched a photographer and poured hot water down his pants -- but this single act of defiance garnered more criticism than any before. She was no longer the cute rascal who could get away with anything.

Throughout this period, Madeline struggled to rid herself of her child star image. She took the path laid out in front of her by the greats of Hollywood like Drew Barrymore, Miley Cyrus[8], she posed nude. The photo shoot was a poorly constructed rendition of classic Marilyn Monroe artistic nude portraits, made alluring by their underage subject.

Soon posing nude was not enough to satisfy Madeline's need for exhibition. On the first of May, 1998, the 15 year old Madeline was arrested, in Paris for public nudity [9]. Photographs of the incident plastered the covers of tabloids from Paris to Tehran. Following this extremely bad publicity, Universal Studios and Disney both canceled contracts, and sued Madeline for brand defamation. Roman Polanski, the only real director willing to work with Madeline fired her from his film The Ninety Ninth Gate and sent her a trench coat, with a note explaining that "sensible people just cut holes in the pockets." Without little money left form her stardom, and with her parents alienated, Madeline found herself in increasing debt, and was forced to rely on the generosity of former classmates, friend Eloise[10] of the Plaza Hotel, and her old gentlemen callers.

Unable to support her lifestyle in London or Paris, Madeline headed for the haven of the Plaza Hotel in New York City where she lived with Eloise. Rumors of a lesbian affair followed. The relationship, superficial and trendy was short lived. When Eloise overdosed in her bathroom at the Plaza,[11] Madeline fled New York, and returned to Paris.

Following Eloise's death, Madeline's life sank further into ruin. She became increasingly reclusive. It's speculated that she spent most of her time sitting in a dark room, watching old movies, and obsessively folding tissues. Though no one really knows.

In 2003 Madeline re-emerged from her self imposed hermitage, and attempted a comeback through the straight to video film industry. When this tactic failed, Madeline launched a dot-com company for adult entertainment. She has won many fans, followers, and imitators on the Internet. [12] Many claim to be Madeline, but only one really is.

That's all there is, there isn't any more.