The Grim Adventures of Billy & Mandy

From Uncyclopedia, the content-free encyclopedia
(Redirected from The Grim Adventures of Billy and Mandy)
Jump to navigation Jump to search 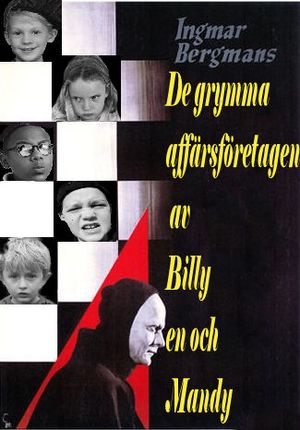 "The Grim Adventures of Billy and Mandy" has been published in over one hundred languages.

The Grim Adventures of Billy and Mandy is an early 2000s Swedish-American cartoon created by Ingmar Bergman. It was one of Cartoon Network's last good shows before their untimely demise. It follows two children who were once miserable, but after winning a limbo game to save Billy's pet hamster, gain the mighty Grim Reaper as their best friend in eternal servitude and slavery.

Billy & Mandy was once a single show titled Bister & Not, combined with Ondska Med Kött. The two shows were separated, with Billy & Mandy being the more successful. The show ran from June 13, 2003 to November 9, 2007, but a spin-off film titled Underfist: Halloween Bash aired on October 12, 2008. In addition to the episodes, three movies, two special episodes, and nineteen shorts were made, with 3 award wins for the series as a whole. Billy & Mandy has also been made into a video game as well as various licensed merchandise.

It has been called the most depressing piece of family media since the live-action adaptation of Shel Silverstein's The Mugging Tree. Banned by many Christian groups and panned in many international circles, Billy and Mandy nevertheless is now stored in a vault deep below the film studio, where it will be re-released on Blu-Ray and Betamax the moment the studio is bought by a conglomerate "willing to spend money to make money."

Billy and Mandy are two miserable children serving aboard the Steamboat Yo under spineless Captain Irwin. The only thing keeping them from going insane is their lovable pet hamster Mr. Snuggles. One day, while they are celebrating the 10th birthday Mr. Snuggles, the Grim Reaper appears. He comes to reap the old hamster's soul, but, to his surprise, Billy and Mandy are not afraid of him at all. Mandy refuses to give Grim the hamster and offers to play a game for its soul. If the Reaper wins, he would get the hamster's soul.

Grim, assured of his victory, says that if they win, he will be their best friend "forever and ever". Grim challenges the children to a limbo match, and being the prick he is, places the limbo rod too low for them to go under. Mandy craftily cheats by making Mr. Snuggles attack him, and Grim is doomed to be the "best friend forever" of the two children. As Grim's first task, he throws Captain Irwin overboard, and takes the children to live with him in the Underworld.

From then on, the three go on all sorts of wacky adventures. Grim is miserable in the first days of his servitude, and even fantasizes of killing Billy and Mandy multiple times (we're not making this up). However, as the time passes, he gradually develops Stockholm Syndrome, and even grows to care for those two snot-nosed brats. Despite this, he still wishes to break out of this hellhole someday.