Robot Santa is a proud member of the Santa Team. Always there to help another Santa move, or to hold their beer when they have to puke. 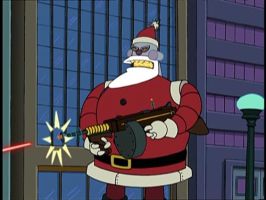 say ello' to my little friend!

Built by a crack team of drunken leprechauns on crack, Robot Santa started out his early years by observing nature. It was then that Robot Santa lost half his face to the fierce Toilet Monster of Sasquatchewan.

In his anger, he became the dictator of Krgystan and enslaved every kitty in sight.

The cats begged for mercy, and he had his friend Ultra-Jesus destroy them. The ever confused and megalomaniacal Flying Spaghetti Monster (FSM) then exiled Robot Santa to the Moon, where he and ally Blackbeard the Potato-Masher Man build a Moon base to take over Mercury and the Commonwealth of Kentuckistan. 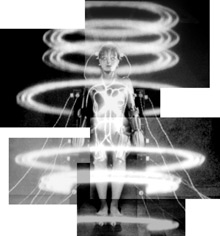 The FSM found out Robot Santa's attempts in Galaxial Domination, and had the robot deactivated. Blackbeard soon sent Papa Smurf to reactivate the robot while Blackbeard went to the circus in the Commonwealth of Kentuckistan. Needless to say, after Robot Santa was brought back to life, he became nice and started giving children presents... or did he? This remains in dispute.

Robot Santa - Where is he now?[edit]

Blackbeard then threw the Robot Santa down to Earth, where he lives to this day. Exact address known only to Future Santa.