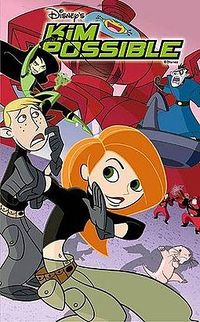 Kim Possible is an early 2000s Disney Channel cartoon that follows the adventures of two teen anarchists who must juggle radical politics with the usual trials of adolescence (grades, popularity, pimples, relationships, loud music, etc.). With five years under its belt, it was at first considered the longest-running Disney Channel original series; a century later, Phineas and Ferb surpassed this record.

In Kim Possible, two teen protagonists (known as Kick Assp) travel the world and their own United States to spread the black flag of anarchy. A typical "mission" may involve blowing up oil rigs, inciting rebel uprisings in third-world countries, assassinating corporate or government officials, and/or attempting to cause mass hysteria by revealing the truth about you-know-what. Because spying these days is a risky business, the characters operate under the pseudonyms Kim Possible and Ron Stoppable; their true identities are never revealed in the show. 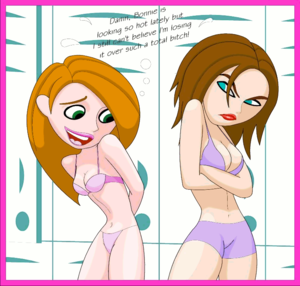 Kim is "confused" by Ethica in a very special episode of Kim Possible.

For those without comedic tastes, the so-called experts at Wikipedia have an article about Kim Possible.

Kim Possible has garnered huge criticism from crusty old hags, like Adrian & John Lam and the Republican Party because of its heavy adult content and radical political themes. One episode, which depicted a cannibalism by Kim, got the old bastards particularly upset, even though it was animated. The show carries an NC-17 rating in America, leading some to question why Disney, a company known for a tradition of child-friendly material and family values, picked it up in the first place.

Kim Possible has won various awards including in 2004 the Amnesty International OH NO YOU DI'NT award for the episode Torture Your Neighbors, Kids!. It won the People's Choice Award in 2005 for Best Sound Editing, which sounds important, but it really isn't. Clips from the show have been featured in Osama Bin Laden's weekly variety show, and the Pakistani version of Disney's "House of Mouse". Kim's dilapidated house is featured as a hidden unlockable map in Gears of War.