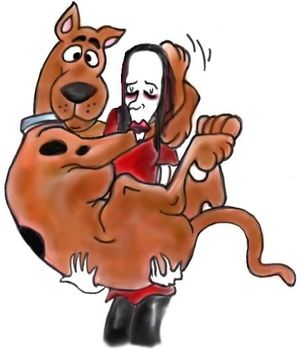 Scooby-Doo is a popular children's cartoon and billion dollar media franchise produced by twin animators Hanna-Barbera. The series was famous for its gutsy tackling of sensitive issues of the 1960s such as bullying, war, drug usage, and sexual repression.

Uniquely for a cartoon, Scooby-Doo was filmed live. The Productions Productions production team chose to employ and film the antics of an array of two-dimensional men and women for the show; furthermore, the characters portrayed by these individuals were named after them. This, more than anything else, has given rise to the internet rumour that the show was filmed based on true enough events. Further discussion of this and other rumours --- fallacious, retarded and otherwise --- can be found at the bottom of this article.

Did you know... N. Rafferty and Productions Productions tried to convince Pppritt to change his characterisation of Scrappy to something less exciting, but he had a gun.

In episode 193 ("I'm Going To rape Scooby And There's Nothing You Bastards Can Do About It", aired without title) a new character, Scrappy Doo, is introduced. Scrappy is a four-foot tall puppy with the face, hands and feet of a human and the ears of George Bush, and is characterised by his catchphrases "P-P-P-Puppy power!", "I'll splat him!" and "This'll fuck you up but good!" and his tendency to urinate on Daphne. Voice actor Lemmon Pppritt was specially brought on for the task of bringing life to Scrappy, and - unexpectedly - chose to do so by screeching out all of his lines in a warbling falsetto.

This, combined with the scripts' new Scrappy-centricity, the renaming of the show to "The Scooby and Scrappy-Doo Show" (later to become "The Scrappy Doo And Pals Show"), and N. Rafferty's insistence that all employees kneel before a nine-foot tall gold leaf-plated statue of Scrappy Doo before starting work each day, was to lead to a great deal of resentment among the show's fans. It was this, combined with the show's cancellation and burning, that is believed to have lead to the downfall of Scooby-Doo.

Mr Black was a doctor who lived in the black estate. In one of the most recent episodes, the gang split up to find clues to who killed him. Daphne incorrectly accused Proffesor Plum with the Candlestick in the Library, when he was actually out on his fifth unsuccesful date.

Planner of devious and humiliating traps. Occasionally the gang will ask him for help in trapping their "Monster", often to the reply "Well aah shure am glad you kids asked me, cos' I've been workin on the most darndest rootin-tootin trap lately!", much to everyones general annoyance.

Manager of the hotel the Scooby Gang usually stays at. He rotates between Hotels and appears to be the only employee on the job. He also usually ends up being The Phantom that is haunting the hotel as well. Trying to scare off the guests so he can get at the gold hidden in the hotel. Mr. Jeevers became so common that they recorded the same phrase so it can be repeated over and over again in the show. "And now let's see who The Phantom really is," the pull the mask off The Phantom, "Jinkies, it is Mr. Jeevers from the hotel!" Eventually Mr. Jeevers joins the Scooby gang as part of his rehabilitation for parole and helps them uncover other Phantoms.

Don Knotts was constantly used in Scooby Doo more than any other famous person. More than Batman and Robin or Phyllis Diller and The Three Stooges. Don Knotts played himself as a bumbling detective who often accuses the Scooby Gang of being relatives to the missing person he is looking for, and accuses them of kidnapping that person so they would get their share of the estate.

A rapist who is a frequent villain on the series. He and Scrappy Doo were caught "behind closed doors" in at least two episodes.

Your first impression of the ghost may be that he is one of the goony (but extremely campy) monsters who the gang is always investigating. Actually, he's a streaker, as well as a "partner-in-slime" (literally) to the Creeper.

Like many cartoons at the time, each episode of Scooby-Doo followed roughly the same format, with only minor alterations between them.

In the first act, the gang, traveling in the Mystery Machine (a time-travelling Volkswagen minibus, converted from a former pedophile's van, which has the "mysterious" ability to appear bigger on the inside than on the outside) are observed traveling in no particular direction for no apparent reason (many believed it was due to Daphne's secret gypsy lifestyle) when they come across a place supposedly haunted by a ghost. Often the "hook" used to pull them in is that the Mystery Machine breaks down and they need to stop for repairs, or that an old friend of Fred's requires their help, or (as is the case in Episode 56, "The Mystery of Mystery Island") Shaggy's near-endless supply of Scooby Snacks has run dry to the point where the floral designs on the Mystery Machine stop moving, and they need to refill.

The gang then begin investigation of the area. They find clues, and—inevitably—Daphne becomes owner of the house, deserted amusement park, or wherever the episode takes place. This will happen through some sort of inventive misunderstanding, often involving the Thirteen Lawyers. At the end of the first act, the ghost will put in an appearance by sneaking up behind somebody and playing some sort of hilarious practical joke.

The second act always consists of Shaggy's extensive psychiatric counseling. There is comical doubletalk between him and his psychotherapist (who always remains unnamed and off-camera; all we ever see of the psychotherapist is his enormous hat) which seems to be building to a recovery on Shaggy's behalf, but is interrupted at the last minute, causing Shaggy to relapse. The reason for the interruption is different every episode. In Episode 6, "The Trouble with Tribbles", for example, the psychotherapist steps outside to get a cup of coffee and is gunned down by Mafioso goons.

Did you know... After Episode 50 ("The Terrible Secret of Idaho"), the writers, running out of states, were forced to begin locating the gang's adventures in fictional U.S. states such as "New Birmingham", "Amazingdale" and "Quashington".

In the third act, the gang move into their new property and begin tidying up the mess left after the horror movie. The horror itself always happens off-camera, before the third act begins. (As the series went on, the references to the wild excesses that occurred on the movie set became more and more extravagant; for example, in Episode 242, "The King in Yellow", Daphne complains at having to clean horse entrails from the living room.) Hilariously, the ghost prevents the gang from properly tidying the house. At first, the gang blame Shaggy for this, but eventually - through Velma's keen deduction or Fred's ability to "mind-meld" - become convinced that they are being taunted, and set a trap to catch the ghost.

In the fourth and final act, the trap is sprung, but thanks to Shaggy's blundering—it fails and they get caught in the trap themselves. They then start a fucking retarded music montage in which they run away like pussies, which usually results in the fucking guy in a suit appearing right behind them. In desperation, the gang are forced to shoot the ghost with a gun instead. At this point, the ghost is revealed to, in fact, be a former minor character in a costume. The gang abandon their new digs and flee as wanted murderers across the state line.

Many fans have wondered why the gang seem to be the only people in the world ever to wonder if the monsters are fake. Why does every other person believe the ghosts, phantoms and spectres encountered on a regular basis are real? Is everyone else the world an idiot? Couldn't somebody else piece together the puzzles for once? And why do the police always show up AFTER the criminal's been caught?

One attempt to answer this has been the novel, authored by Wendy Teasdale, "Scooby-Doo and the Illuminati." Set between Series 4 and 5 of the official series, Scooby-Doo and the Illuminati tells the epic story of the gang's discovery of a secret and shadowy conspiracy devoted to hiding all evidence of the gang's doings and wiping the minds of all those who encounter "monsters".

The position of this piece within series canon is hotly debated. The most contested points are:

Hannah and Barbara productions have not released any official comment on Scooby-Doo and the Illuminati, and have insisted that writer J. Lindisfarne was speaking metaphorically when he vowed to "shoot that goddamn stalker bitch right in the face" upon being presented with a copy of the manuscript.

A series as successful as Scooby-Doo inevitably attracts all manner of rumours and theories. Some of the most common are: