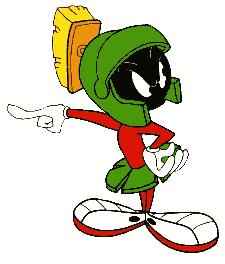 Not even Stalin would mess with this crazy mofo.

For those without comedic tastes, the so-called experts at Wikipedia have an article about Marvin the Martian.
“It obstructs my view of Venus”

~ Marvin the Martian on Earth

“This guy scares the hell out of me! Who in their right mind goes around blowing up entire planets!?”

~ Steve Allen on Marvin the Martian

~ Mr Ross on Marvin the Martian

~ Steve Irwin on Marvin the Martian 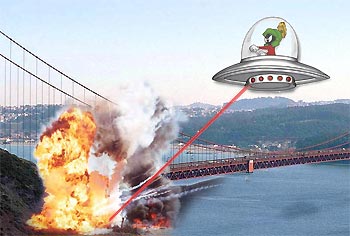 Marvin during one of his hissy fits while visiting San Francisco

Determined to declare all planets in his path from here to Proxima Centauri in the name of Mars. Marvin hails from the Eccentrica District of Northeast Marzipan. overcame his handicaps to become a great warrior of the twenty-fourth and a half century. (Earth time) Ben and todd are his right right hen men.

An avid astronomer, Marvin desires the clearest view for his telescope, eliminating star systems and planets that obstruct his view, using his weapon of choice, the Eludium Pu-36 Explosive Space Modulator (this Earth-shattering device resembles a large firecracker). His support troops consists of a green dog (K-9), and a bottle of 1000 Instant Martians, to which he merely has to add water.

It is suspected that Dodgers is actually related to Marvin, as seen when accidents knock off Dodger's beak, there is a strong family resemblance.