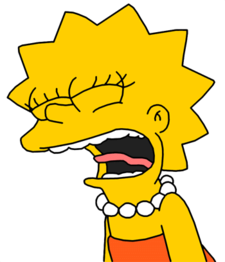 This photograph shows Lisa directly after finding out that she would not be in the Simpsons Movie's sequel, should there be one. Perhaps this is the breaking point.

Springfield.....somewhere: As the premiere date for the upcoming "Simpsons Movie" approaches, many of the cast members have become stressed, anxious, or just plain tired. So far, they have all used semi-legal drugs to remedy this. But did one cast member resort to murder?

It all began late last night, as writer Matt Groening closed the last day of shooting the movie. It had to be released soon, and the date could no longer be pushed back. At the end of the final shot, most of the characters left immediately, to pursue what little remained of the social lives they once had. Little Lisa Simpson, however, stuck around. She claimed she wanted to speak to the writers before the final editing, and nobody thought it out of the ordinary. However, she did not speak to either James Brooks or Matt Groening, instead lurking in the shadows of the set for several hours, late into the night.

Said Fred Meadows, one of the janitors; "I had no idea what she was doing. At first it seemed she just wanted to steal something from the set like the rest of us, but that clearly wasn't it. She seemed kinda hungry, but we decided to let her alone. Good thing too, or it might have been us in that dumpster."

What the janitor is talking about, of course, are the two mangled bodies found stuffed in a dumpster outside the set. "Yeah, she got 'em real good," said the Janitor. And get them she did.

The brutality that ensued at the crime was both sickly disturbing and vaguely arousing.

These bite marks are the key to the investigation, as they point to Lisa Simpson as the perpetrator. According to Lionel Hutz, Miss Simpson's attorney, "My client did not kill those people. She may have eaten them directly after they died, but she did not kill them."

Luckily for the investigators, there is a second piece of damning evidence, the eyewitness testimonial of a police officer, who was on the scene at the time, trying to steal artifacts from the set to sell on eBay. According to the officer, Mr. Cody Enyman, who also wishes to remain anonymous, little Lisa ran up to him, crying and laughing at the same time. "She was bragging about the killings!" he said. "She said she was still hungry, and that I would be next, so I shot her. I capped the bitch. Only in the leg, of course, but I, uh..... I put her on the ground."

Naturally, the anonymous Enyman felt that justice had been served. "Honestly, if she was stupid enough to confess to cannibalism to a cop, she deserves to go to jail, whether she actually did it or not." Miss Simpson awaits trial in an undisclosed prison cell.