This article has been approved by His Holiness Pope Benedict XVI.
Don't forget, the earth was created 4004 BC and fossil evidence is a test of faith! Don't let school pervert you, little children! ;)

Night is all of the time not technically or theoretically classed as day. It's caused when the sun is no longer visible to the naked eye, a phenomenon known in Ancient India as जहां खूनी नरक सूरज है but is now known to modern science as "darkness". It is always night somewhere in the world, as the sun is supervised on it's journey across the Earth every day by His Holiness Pope Benedict XVI, except in some far northern reaches of Scandinavia, as the people there are Lutherans.

Throughout history, many people have felt that night should be outlawed. Most of this opposition can be attributed to economic reasons, slave labourers are simply unable to work to their maximum effectiveness when they are unable to see what they are doing.

During the crusades an Islamic group of scientists known as Al-Qaseltzer constructed a huge mirror ball, in attempts to light up the night sky and allow assassins to infiltrate the camp of Richard the Lionheart, of course this failed as the guards were now better able to spot the assassins. This story has had a great impact on modern culture, even today the lunar symbol can be seen on Islamic flags worldwide and who could forget Star Wars, in which the Jedi warriors were based on medieval knights. 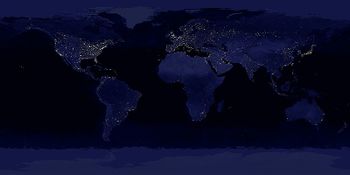 Several enemies of the church have tried to destroy many religious facts with their lies, His Holiness suggests no more shall be spoken about them, as they are all now in hell.

The most recent individual advocate of satan extended daytime hours was a British scientist, Joseph Swan, who invented the lightbulb. After realising his mistake he cleverly managed to shift the blame to Thomas Edison. The world is now convinced Edison in fact invented the light bulb, Swan still resides in hell however, as he failed to send his apologies to His Holiness. 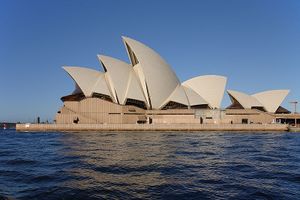 A photograph taken during night time in Britain

After freeing people around the world using majesty and might, the British Empire stretched between both edges of the Earth. It was commonly said that the "Sun never sets on the British Empire." Through the 19th century colonies such as Barbados and Jamaica boxed up sunlight and shipped it back to England citing an attempt to combat the smog caused by the industrial revolution, while secretly despising night, and actually helping factories throughout the country, by allowing workers to continue through the night. In response to this, while His Holiness does guide the sun allowing normal night and day in Britain, it is only so it can be observed how dreary and wet it is.

Night is generally considered more dangerous than day. This is mostly due to the lack of light so it is much more unlikely for someone to notice threats before it's too late. So if you ever find your self in a horror movie situation make sure its day or you're dead.

It has long been observed that night is longer during the winter. Heretics are quick to point at that this is probably due to God being lazy at this time of year. His Holiness wishes it to be known that God is never lazy, he is in fact omnipotent, omniscient and omnipresent, except on Sundays. We shall not even mention the other heretics.

Seasonal changes in the length of night can actually be attributed to changes in the sun. The sun actually suffers from Seasonal Affective Disorder, making it extremely grouchy as it doesn't like the cold weather. Paradoxically, the absence of sunlight also makes the condition worse.

Any other "theory" should be considered herecy.

A wave of darkness once again raced across the land this evening. Babies and young children everywhere started crying. Millions of commuters rushed home as fast as they could in speeding automobiles, while being forced to turn their headlamps on. A cnn reporter caught up with a meteorologist who was also rushing to escape work and go be with loved ones, however, when pressed for information he said, quote, "WHAT!??? LEAVE me alone, I just want to get home!!!!" Despite these panicked fears, rumors persist that the sun may yet once again return - - some day.