From Uncyclopedia, the content-free encyclopedia
(Redirected from Flag)
Jump to navigation Jump to search 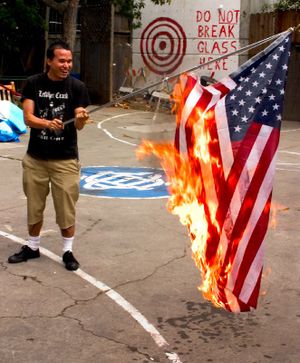 A common moron of the Asian variety, burning an American flag. It's likely (as evidenced by his facial expression) that this is the most fun he's had since he spent 96 hours straight, leveling up his Runescape character...

Flag Conflagration is an elaborate term for flag burning, which, in turn, is a fancy way of describing the act of setting ablaze a tattered old rag which at some point (which no one cares to remember) symbolized a country.

Flag conflagration (or burning, or whatever the hell you wanna call it) is the official sport of al-Qaeda, the Boy Scouts and many other evil organizations. It is also the national pastime of any country where kittens are insufficiently available to allow kitten huffing to propagate as the national sport. Being that kittens are “frickin everywhere”, flag burning has only truly taken root in Mongolia. Iraq has also adopted flag burning as their “temporary” official sport due to the targeting of kitten trafficking and the confiscation of wild kittens by U.S. forces.

The global media Cartel would have you believe that flag burning is intended to upset the citizens of the country represented by the flag.

On rare occasions, emotionally unstable morons, and soft skinned candy-asses have become upset when they see images of unemployed, angry simpletons participating in the burning of their home countries' flag. The far more common result of flag burning is fifth-degree burns to the genital region(s) of the burner(s). In Mongolia and Iraq, (where flag burning is the official sport) testicular skin grafts and pubic hair realignment are among the most common surgeries performed during the height of the flag burning season (January 3rd - December 27th)

Al Gore has, on multiple occasions, blamed climate change on flag burning, and said that it alone is causing global warming, although his official web page blames the Babylonians. Both these statements are probably contrary to his personal beliefs which almost certainly involve a Martian conspiracy 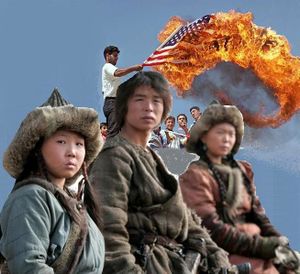 When they aren't sneaking over the Great wall, raping and pillaging China, Mongols enjoy their national pastime: Flag Burning

Being that it can be considered a sport, flag burning has a governing body, though this fact is largely unknown.

The “International Federation / Union of Conflagration and Kiddie-fiddling” (or iFUCK for short) was originally created to provide guidelines to arsonists and child-molestors, but that didn’t work out so well… so anyways, iFUCK was reconstituted to regulate flag burners (who were seen as more moderate arsonists).

iFUCK has written a rule book which is referred to, more often as a source of kindling than rules. They have also created a scoring system which takes into account, four factors:

A.)The number of angry morons standing around shouting idiotic protest chants B.)The complexity of the flag C.)The number of flags to be burnt (3x point multiplier for simultaneous conflagration) D.)The number of seconds it takes to completely burn the flag. (The longer the burn, the higher the score)

These four values are multiplied by each other to reach a total score. An overly complex example is shown below as a visual aid for anyone incapable of comprehending such an enormous equation.

Unfortunately, there are rarely people in attendance who are wealthy enough to afford a calculator, or who possess the mental capacity to perform such a mind-boggling equation, so final score is often very hard to determine. 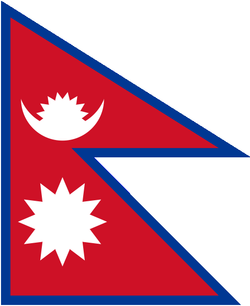 The flag of Nepal, the most sought after flag for flag burners. Unfortunately, Nepalese sweatshops are too focused on meditating and other Buddhist shit to produce these flags in large quantities.

Contrary to popular belief, flags are chosen based on their burn value, not the country they represent. According to iFUCK’s official rule book: “The more fucked-up looking the flag, the higher your score”

Tri-color flags are generally worth more, and stripes, stars and other retarded design features add even more to the flag value. According to the rule book: “Stripes numbering greater than 5 will provide a 5x multiplier per stripe over this limit. Stars numbering greater than 10 will provide a 3x multiplier per star over this limit.” One factor which could have a large impact on score is flag shape. According to the rule book: “Any flag that has more than four sides is extremely trippy and therefore comes with an automatic bajillion point multiplier” Unfortunately, most people who are put in charge of designing flags are given this honor because they are the least original, least radical cuntfishes who have ever walked the face of the earth. These unoriginal bastards always resort to a four-sided shape for their flag…

According to these rules and guidelines, Nepal has the flag with the highest initial burn value. Unfortunately for flag burners the flag of Nepal is only sold in gas station food marts high in the mountains of Nepal and is frequently out of stock. This forces burners to resort to the second most valuable flag: the flag of the United States of America.

Contrary to popular belief, most pyrotechnically-inclined flag enthusiasts favor the Star - Spangled Banner because of its high initial burn value, its wide availability and the fact that it is so often made in China which insures that some crazy-ass chemicals used in manufacture will lengthen the burn time.

After a 98.7 trillion dollar investment, the Libyan government was left with a flag that is almost guaranteed to never be set ablaze. Honestly, who would waste their time burning this piece of shit? It would simply look as though you were burning a green bed sheet...

These scoring guidelines have caused several nations to be huge pussies and complete chicken-shits when it comes to designing their flag, simply to discourage burners from using it. Some good examples of this can be seen in the flags of China and Canada who both opted for bi-colored flags. China thought they would be edgy and go right up to limit with stars. Unfortunately they epically fucked-up and confused the star limit with the stripe limit. After that, the other dirty commies involved in the flag’s design chose to go with a boring-ass red field.

The ultimate example of the effect that the flag burning score system has had on global flag design can be seen in the flag of Libya, (seen left) which the Libyan government blew trillions out their asshole to acquire. Libya funded think-tanks, mad-scientists, depressed scientists and retarded scientists before some unknown moron somewhere came up with the shitty green flag thing that they got going on now…