Mongolia doing what it is most famous for.

Mongolia is an Asian country renown for being that place stuck in between Russia and China. On the whole, this is considered the most interesting facet of Mongolia today.

The history of Mongolia is a much more interesting subject for discovery. In 5500 B.C. the first domesticated horses were brought to one lucky Mongolian tribe. They saddled up, and immediately left Mongolia. And thus began two proud Mongolian traditions: riding horses, and leaving Mongolia whenever the first opportunity presented itself. This was great until all the neighboring areas began to send them back from whence they came, on account of them being stinking Mongolians. Now stuck in their awful, awful country they came together and created the First Mongolian Army to fight those that would stop them from leaving. Unfortunately, the army was terrible, and with each series of losing battle after losing battle, it became more and more apparent that they would be stuck in Mongolia. It was during this time of forced Mongolia-imprisonment that the happy-go-lucky Mongolians became an angry, vengeful people. When their rage finally boiled over, and they could take no more of their native land, they would set out in a display of violence and savagery never seen before or since. And that is how the country of Mongolia spawned not one, but two nomadic empires whose main goal was to get as far away from Mongolia as physically possible. 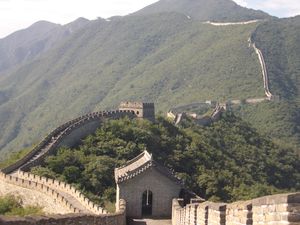 "A waste of goddamn time!" - All of China on the Great Wall.

Originally, the Huns were known as the Xiongnu, group of young, wide-eyed Mongolians with tons of moxie, and something to prove. With the anger and ferocity that can only be found in those who had been forced to stay in Mongolia for an extended period of time, they broke out of their borders and began a series of hit-and-run attacks on the Han Empire of China, which led directly to the fall of the Han Dynasty in 220 B.C., and the rise of the Qin Dynasty. The Qin, foreseeing the problem of having a group of angry, pent-up Mongolians on their border, decided the only way to stop the hordes was to build a wall between the entire the Chinese/Mongolian border. Thus the Great Wall of China was born, and Mongolians had a physical barrier now stuck between them and freedom from Mongolia. For a few decades they simply attacked and destroyed the wall in various places, but eventually rumor reached the Xiongnu that there was a vast expanse of non-Mongolian land to the north and west of China. The Xiongnu, not ones to sit around and wait to leave Mongolia, headed west and left Mongolia forever. The Chinese were not amused that the wall that took them 50 years, and untold millions of deaths to build had worked moderately well for 20 years before the enemy they planned on keeping out forever just up and left. The Qin dynasty fell shortly thereafter. 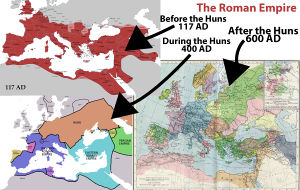 The Huns, kind-of, sort-of ruined Europe for everyone. Ohhhh, but look at all those pretty colors on that map now!

Records of the Xiongnu following their mass exodus are sparse, however in 300 A.D. they come into contact with the Eastern European countries of the Eastern Roman Empire, and Byzantium, having fled as far west from Mongolia as they were able. For 140 years the Huns ravaged Eastern Europe, eventually carving out a nice large space of land to call their own. Controlling this land had a ton of perks, not the least of which was that it was not Mongolia.

In 440 A.D. the Huns under Attila pressed and squeezed on both the Eastern and Western Roman Empires, until the Western Roman Empire fell, leading to the period known as the Dark Ages throughout Europe. This was a great time for such empires as the Huns, Vandals, Goths, Visigoths, and Burgundians. However, as most could tell from the names of these empires, it was a terrible time to be in Europe in general. The Huns on the other hand couldn't have been happier, as the old Hunnic quote stated, "A terrible day in Europe still sacks the horse's dick out of any amount of time in Mongolia." [citation needed] These Attila-led Huns were a force to be reckoned with. Their empire was the largest in Europe at this time, and were feared from Russia to Spain. When Attila died in 453 A.D., however, the Huns were unable to sustain themselves, and within one year, the empire was completely dissolved. This led to another Mongolian tradition: Having great, great empires, and absolutely no idea how to keep them. Still, the Hunnic empire couldn't be considered anything but a huge success. It showed what the Mongolian people were capable of if kept cooped up in Mongolia for a few hundred years, and then broke out. And the Huns hadn't even been in Mongolia for over 500 years. Now, you might be saying to yourself, "What if a group of Mongolians were forced to stay in Mongolia for over 1000 years?! Wouldn't that be something?!" Boy-oh-boy, it would indeed be.

With the fall of the Qin Dynasty in the south, China was full fledged into their Romance of the Three Kingdoms period, and the Chinese warlords were looking for any able-bodied man to add to their armies. When the Xiongnu fled, it left the vast majority of Mongolians without their greatest warriors. Adding to their problems, most of the remaining young men jumped at the chance to leave Mongolia for any reason and joined several different sides in the Chinese war. Without any semblance of an army, Mongolians lost any hope that they would be able to leave. The Chinese Jin Dynasty that rose in 265 A.D. following the war was more than happy to exploit the Mongolian people at every opportunity, and especially to keep them stuck inside Mongolia. This left the Mongolians severely weakened. For 1000 years, they were left leaderless, and in a state of expansive, limitless fury. It was then when Genghis Khan appeared.

Genghis was not your typical Mongolian. Instead of being in a constant blind rage as the rest were, he was considered a quiet and inquisitive man. His rage was classified more as that of a sociopath: thoughtful, planned, and purely evil. A true son of 1000 years of unbroken Mongolian living! Genghis used this terrifying quality of himself to unite the numerous Mongolian tribes, and in 1206 he told his armies "The army division that caused the most death would be placed in areas of the empire outside of Mongolia," as a way to inspire his troops. What followed was 100 years of slaughter and destruction that completely changed the world. For the worse. For the much, much worse.

The Mongolians, kind-of, sort-of ruined Asia, Europe, and the Middle East for everyone. They also tend to be juggernauts at Risk.

Some highlights of the Mongol reign of terror that led to them holding the largest contiguous land empire in human history, from least to most barbaric:

There is no real way to capture the destruction the Mongolian conquests from 1206 - 1368 caused. The numbers, however, are staggering. Historians estimate that between 60 and 100 million people died as a result of the conquests, and the battle to keep the Yuan Dynasty in control of China. That was a scant 25% of the population at the time. In the entire world. Add to that the fact that the Black Death they helped spread through Europe ended up killing between 30% and 60% of the European population at the time, and that they created the poop sandwich that is the Middle East, and you have the reason for our planet's one unquestioned rule: For the love of God, do not, under any circumstances, keep the Mongolian people trapped inside Mongolia for any long amount of time. Because seriously.

The Mongol empire ended in 1368, when everyone got angry that fucking Mongolia owned the entire continent of Asia. This marked the final time Mongolians have done anything the least bit interesting, having instead fallen into the depressing trap that is living in Mongolia. 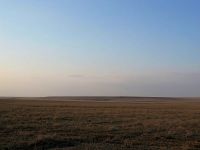 Steppes: The most exciting, never-ending region of Mongolian geography.

Mongolian geography is as apt to sustaining life as an asbestos factory. Much of its area is covered by continuously flat, never-ending, lifeless steppes, with each steppe more flat, never-ending and lifeless than the last. If you need a break from the steppes, (Really can't interest you in more steppes?!) you can always head northwest towards the mountains, a.k.a the slightly taller steppes. If that also doesn't tickle your fancy, you can head south (Back through those steppes!!!) and get to the Gobi Desert. The Gobi Desert, which, might I add, still gets more rain then the steppes. This makes the Mongolian steppes the only known region in the world that gets less rain than the desert it borders. So the country has that going for it.

The climate of the steppes are a mix of sweltering heat, sub-zero temperatures, and absolutely nothing in-between. The summer is short and blazing, with temperatures in August averaging around 112° F, while the long, cold winter can easily bring temperatures to -50° F. The steppes are also well-known for their strong winter winds, which can hold steady at 40 miles per hour. At times when the freezing temperature is crystallizing their fingers in front of their very faces, the Mongolians will run for cover towards... oh, no wait. Nevermind. Just more steppes in every direction. 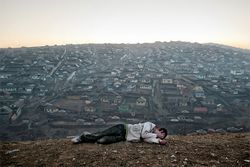 The Mongolians are a hard, weather-beaten people. They are generally feared and misunderstood, on account of them killing 1 out of every 4 people in the world that one time. But if you can look past their fearful history, you will find an angry, aggressive group who want nothing more than to reclaim their former glory. Fortunately for the rest of the world's population however, the Mongolians are proud of their tradition, and refuse to update their army from the mounted archers of the Genghis Khan era. This makes them somewhat less feared, what with the invention of guns and whatnot.

Since their ability to take over all of Asia again seems unlikely, this leaves the people desperate for any rays of hope. In 1913 a hopeful young Mongolian boy told his sister that he believed there was a totally hospitable area of Mongolia out there somewhere. The sister told her friends in the neighboring town, and before you knew it a rumor had been born. Since that year over 50% of the Mongolian people have been nomadic, up from 35% the year before. All of them out searching, believing against rational thought that just beyond that mountain, somewhere in the desert, or, even more unlikely, somewhere in the middle of the steppes, a glorious piece of pure Mongolia exists. With rain, and rivers, and edible food and everything else a naïve Mongolian can dream up. Unfortunately for these people modern imaging scans show that none of those things exist in Mongolia. Nothing can be seen except absolute desolation in every direction, but that information is kept under wraps. If that hope were erased, they might try and leave Mongolia again, and nobody wants that. Except for the Mongolians, of course. Oh God, they are desperate to leave!

100% of the population speaks Mongolian, as 100% of the people who live there are native Mongolians. Written language is still a mystery, as it is unclear if Mongolians know how to read and write, or if they pass on information in the form of dance, like bees.

Mongolians live in Mongolia. For this reason, Mongolians have no religion, as no God would do such a thing to His people. One tribe tried to preach that if religion was followed, a better way of life could be achieved in Mongolia. The entire tribe was found to have committed suicide three days after stating this, on account of all hope in this idea being lost. No one since has claimed anything but a deep seeded anger where God is concerned.