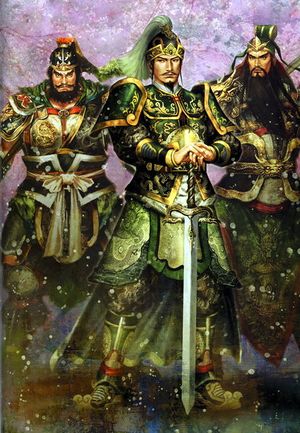 Dynasty Warriors (Chinese: 同志無雙) is a hack-n-slash ten-thousand warriors who are literally sent into the game to do nothing video game franchise series for Playstation 2 and PS3 by Japanese fashion designer Koei. In 2011ish, Koei's bitter enemy, Tecmo, and themselves became like brothers, only closer and formed TecmoKoei. Thus, more boobs were born into the game. This lessened the amount of prejudice towards the game's title, which happened to throw two cool words together in the most lamest way possible. These two words being Dynasty and Warriors. Which oddly, in Japan, is not the title of the video game there. In Japan, Dynasty Warriors is known as Shin Sangoku Musō. This unpronounceable title translates to "True - Unrivaled in the Three Kingdoms". This is most likely one of the reasons the game is trashed in the United States. This legend bore the famous saying, "without a cool name in Dynasty Warriors there will be no engaging with the game itself. Instead, thy shalt enjoy CoD".

The game is also available for X-Box. Except for the eighth installment, which caused many crazed "fighters" (a term for fans of the game) to commit seppuku. This form of suicide is considered normal, because the Chinese history-based game is made my Japanese people.

One rule of the Dynasty Warriors production phase is that all characters must look like an American in order to make the smallest run of sales in the very picky country.

The Dynasty Warriors franchise is based off Luo Guanzhong's long and torturous book; (with a Hellish 120 chapters and over 2000 pages) Romance of the Three Kingdoms. This book contains no romance, just a few incidents of the word "coitus" being used here and there.

Since February of 2013, the franchise has forced out eight repetitive awesome games. (And counting) 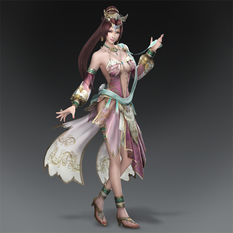 In the Dynasty Warriors series, the player takes the role of one of once-a-couple-now-seventy-too-much warriors from the Three Kingdoms period of Chinese history. Around 10 or so characters never actually existed, and only one woman in the entire game has fought in battle. The others either again, never existed, or too busy being abused. The game is notorious for having several female characters that could make you get off upon the first glance at them. Examples include Bao Sanniang, Zhenji, Diaochan, Sun Shangxiang, and Zhen Ji.

Armed with many anachronistic weapons and armor, the player enters a "so-called" battle (based off the ones from the Three Kingdoms) and "fight" tens of thousands of soldiers. These soldiers, tend to never fight back. There is a theory that this is intentional, in order for the player to become confused upon their first death at the Battle of Hulao Gate where upon Lu Bu slaughters the living fuck out of them, all atop his mighty Red Hair. His Red Hair is actually a horse, not hair. And a fast horse to be specific.

During gameplay, when the soldiers die, a series of infinite cries are given out, which sound like "AAAAAAAAHDHGREEGFFDTGODFCOOGTHISGUYTOUCHEDMESEXUALLYAHHSSDGF!"

Between battle sequences, the player is forced to watch interminable cutscenes. In these scenes, men swear oaths to each other, watch large numbers of soldiers parade about, touch each other's backs, and gaze longingly at hillsides whilst repressing powerful unspoken feelings. In many versions of the game, these cutscenes cannot be skipped no matter how much the player frantically presses the X, B or Start button, each desperate moment bringing him closer to his own long-inhibited yearnings. The issue was resolved in the 7 installment, which made the cutscenes transition perfectly from gameplay to the cutscene itself. These tend to be included in the beginning, middle, and end. They also usually start with some crazy stunt that is unlikely to have been performed by the ancients, such as jumping off from a fucking cliff with your horse and landing perfectly without the horse in-need of euthanasia.

Dynasty Warriors offers players a wide selection of characters for gameplay, all with different abilities and styles of fighting, most of them with questionable gender and sexuality. They also all look like Americans. In fact, the 70+ family of Dynasty Warriors is a little too white that the eye alone can handle. The characters are divided into Three Factions or "Kingdoms": Shu (translation: effeminate), Wei (translation: butch), and Wu (translation: gender-bending). In the 7th installment, the game doesn't end in 234 CE and ends properly in 280 CE. However, the assholes from Jin that ended up making all the original fighting teams lose is included as the hence of it. Seriously, Sima Yi's children are cunts. 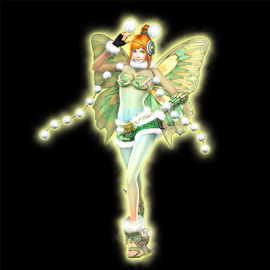 During the making of Dynasty Warriors 5, KOEI decided that the game should be partially educational, so the nerds can double the boner size. As a result, five (coincidence?) characters were created.

Shu was introduced with Guan Ping and Xing Cai, to teach children table manners. Guan Ping wields an oversized steak knife, which during combat forces him to appear in a struggle to lift the blade while running. Xing Cai wields a giant fork. When playing either of these two characters, kids can learn how to use kitchen utensils properly while still tearing the enemy limb from limb with giant pointy objects. Which can make us assume that Japan has some messed up views on politeness.

Wu was given Ling Tong. This shows kids that holding grudges can get you into deep trouble with pirates. Ling Tong is given nunchuka, and he is given the power of swiftly kickin' opponents' asses; in style.

Wei was given Cao Pi and Pang De. Pang De is given two giant war picks whilst Cao Pi is given this Darth Maul sword thingy. Only it isn't a lightsaber.

In beta testing, Dynasty Warriors 5 also included Deng Ai, a character armed with giant chopsticks. However, the character was removed by Koei before the game's release because Western playtesters found him too difficult to use. He was finally given his chance in Dynasty Warriors 7, where upon he is given an oversized drill in which TecmoKoei called a "lance".

Dynasty Warriors 7 (FYI pushed Dynasty Warriors from a peaceful 30ish characters to a chaotic 65 characters) also included the first gunman of the franchise; Guo Huai. His gun is called a "boom stick" in the game. This is all in effort to appeal to the Western audience while remaining educational with the message that "nicer words" still work fine, but not just as fine as using "naughty words". 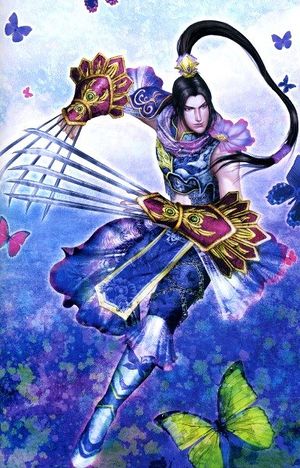 Zhang He as depicted in Dynasty Warriors. No comment.

Controversy and the James Quinney Massacre

On the morning of April 27th, 2006, high school student James Quinney of Little Rock, Arkansas, walked into his grade ten algebra classroom. He was a loner and outcast amongst his peers, known for his quiet obsession with video games and described by jocks as simply "homosexual." (which James protested, stating that the game is not gay, it's "metrosexual") He was a troubled student, and had been twice called into the principal's office in the previous year for threatening fellow students with his Musou Ability. He was the lead singer in a garage band called "Mi Win," which played bizarre 80's-inspired rock mixed with solos on traditional Chinese instruments such as the erhu and liuqin. Fellow students described their music as "crappy" and "repetitious."

James' fellow students immediately noticed something threatening about his appearance that morning. He was dressed in fine silks, looking uncommonly beautiful. On his back was perched a pair of purple butterfly wings. Alarmingly, he wore two sets of metallic claws jutting from his arms. Before they could react, James charged at them, slashing at them with the claws.

When the carnage ended, eleven students lay "KO'd" on the tiles. Five others were hospitalized. James, cornered by police, shouted, "My death shall be a thing a beauty!" and opened his cartoid artery with his claws. Emergency crews were unable to revive him.

Police investigators, initially puzzled by the slayings, discovered several interesting facts which would later spark the Dynasty Warriors furor. According to his parents, James had been playing Dynasty Warriors Empires 5 recently, and the costume he donned on the fateful morning of the 27th was in fact the traditional Chinese garb of Zhang He, a character from the game.

For those without comedic tastes, the self-proclaimed experts at Wikipedia have an article about Dynasty Warriors.

Civil rights activist Pat Robertson was the first to weigh-in on the issue. In a press conference held at The Greenville Center for Poorly Thought-Out Ideas, he announced his church's views on Dynasty Warriors and denounced Koei, claiming that the characters "aren't even American" and are "commies".

Matt Foremen, a gay-rights movement activist, was the quick to the response and contradicted the effects of the Robertson speak-outs.

“While the Lafayette School Massacre is regrettable, it is not the real issue at the heart of this controversy. The reason Pat Robertson and these religious nuts are attacking Dynasty Warriors can be summed up in two words. Gay empowerment. It's truly frightening to these people to see gay men with swords, kicking ass. I happen to really like Dynasty Warriors. Especially Zhao Yun. His moves, his musou ability, his thighs... Excuse me. I have to go to the washroom.” 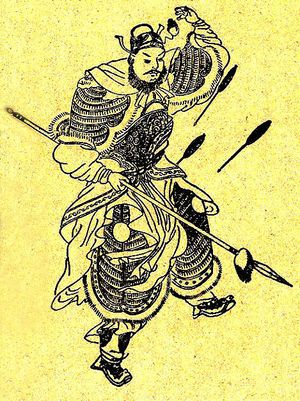 Zhang He as he would like to be remembered, only not drawn so badly and not being arrow'd.

Zhang He Speaks Out

In 2005 Chinese seismographers noted what they thought was faultline activity in the vicinity of Luoyang. The tremors struck hardest in the older section of the city, and seemed to be centered on the tomb of ancient Wei commander, Zhang He. The heaviest of the tremors was detected in October of 2006, when Koei released Dynasty Warriors 5. Baffled, the grave was exhumed by authorities and it was discovered that the corpse had rolled over several times.

After the Lafayette School Clawings and much unfavorable public scrutiny, Zhang He finally spoke out on Larry King Live on September 19th, 2006. With the help of Taoist mystic Suo Wu Liao, the unquiet spirit made his feelings known.

“Okay. So... this Dynasty Warriors crap? Buncha garbage. The way they portrayed me was really inaccurate. I didn't look like that, with the goddamn fairy wings and the claws. I was a really good commander, ya know? People respected me. Women loved me. Now people are just going to remember me as that fem who inspired that moron to carve up his friends. Wei Yan's not too happy about how they portrayed him either, with all that barbarian bullshit. You want to know what your ancestors are thinkin'? They're pissed off!”

~ Zhang He on Dynasty Warriors