Small ancient Kingdom located within the center of the Asian landmass, Euthanasia (occasionally spelt Euthenasia and pronounced "Youth in Asia" or spelt Utah-nasia and pronounced "Yoo-tah-nay-sia" as in proto-Engrish language used hundreds years ago) is a popular destination for people wishing to escape the pain and suffering of modern life.

Thought to be located within the northern Himalayan range, Euthanasia was first mentioned in a 12th Century manuscript "The Quest of the Sacred Mushroom". It is considered to be located in the kingdom of Neverlands. In 1927, German explorer Professor Johann Sterbehilfe reported reaching the ancient city, where he claimed he met a race of super-intelligent humans, including their contemporary King, Donotresuscitate.

He claimed that they formed a secret brotherhood to "watch over" mankind, called the Illuminati, and that they were descended from the mythical Race of the Uncyclopedians. The citystate of Euthanasia has one of the few remaining communistic regimes left on earth. The unicorn is an animal that can be found in abudance in Euthanasia and is also its national symbol.

Euthanasia is also known for it's animal cruelty. An article by Reddit describes the euthanizing of chinchillas; the chinchillas are forced to convert into one of the suicidal cults known as the "The Black People's Temple" led by the reincarnated Jim Jones. The chinchillas are then allowed to commit suicide or "euthanized." The Animal Activists have tried to increase the awareness of this animal cruelty, but they haven't received any recognition because most of them are women.

The official flag of Euthanasia

The elusive city of Euthanasia is currently ruled by a being known only as the High Revolutionary, who is a godlike and eternally stoned ex-hippie and radical communist who once found a way to evolve himself into near godhood by unlocking the secrets of LSD and DMT and using it on himself whilst at the same time reciting poetry from the well known poetry collection called the Communist Manifesto.

Euthanasia is populated by many ex-hippies, many being exiles from the formerly paradisic Goa in India, which is now an unholy tourist-trap for old grandmas and candyravers. Euthanasia is also the birthplace of the legendary Doctor Doom, ruler of Latveria.

Despite accounts to the contrary, some die-hard fans believe that the diabolic President Rutherford B. Hayes is still alive somewhere in Euthanasia. 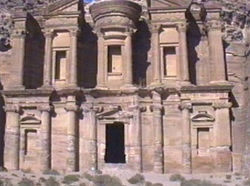 The ancient temple of Euthanasia is the final resting place for many in their trek.

The term 'Euthanasia' has entered modern parlance as a reference for an enlightened spiritual state. Many people seek for this state to be bestowed upon their elderly (and rich) relatives, and neighbours. Repeated and excessive practicing of Kitten Huffing is known to assist in reaching this state.

The old monarchy with its ancient kings were overthrown and replaced with a new communist regime in 1965 by the mysterious and godlike High Revolutionary who may or may not be an unknown alter ego of the omnipresent Oscar Wilde. Though most tourism brochures show only old people wearing strange hats, there are in fact Youth in Asia (which became "euthanasia" for short). This explains why Asia continues to have the billions of people it is famous for. The fact that Euthanasia is communistic only serves to make it seem more exotic in the eyes of the capitalistically minded westerlings.

The Youth in Euthanasia are much like the Youth in Asia, but are also are well known for their terrorists tactics. Their main tactic is becoming Medical Doctors who gain the trust of their patients and then proceed to kill them mercilessly when their money runs out. This led to the creation of the Global Doctors United for Change. Their mission is to peacefully destroy all Euthanasians.