From Uncyclopedia, the content-free encyclopedia
Jump to navigation Jump to search
“It exceeded all of my expectations, and I've been to Colombia!”

~ Oscar Wilde on how awful the Dominican Republic is

~ Any Dominican on hopes and dreams

“Ugh... Poverty and violence? This needs to change!”

~ Caribbean nationalists on the Dominican Republic

The Dominican Republic is a Caribbean "nation" situated on the eastern two-thirds of the island of Hispaniola, which is commonly referred to as 'Quisqueya'. The DR is located between the Caribbean Sea and the North Atlantic Ocean, east of Hades. It is one of the few islands to contain two countries in it, despite many Dominicans' best efforts to get rid of Haiti. The Dominican Republic has the second highest growing economy in the Caribbean, which is reflected by the current president's bank account. Quisqueya also holds the record for the biggest wasteland in history with 27,751 km long, but enough about Haiti, let's go in depth about the wonderful "nation" that is the DR.

The Dominican Republic was the first island of America (the continent, not the nation) discovered by explorer Christopher Columbus in 1492. These newly discovered lands were undiscovered by virtually everyone with the exception of the fifty to one hundred million people who were already living on the continent.

When Columbus first saw these lands, he found the landscape to be stunning and he gave it the incredibly original title "Isla Hispaniola" (Spanish Isle). Columbus then decided that instead of creating a new society with liberty and justice for all, it would be better to steal all of the natural resources and then kill all of the Taino Indians (not to be confused with Peruvians). 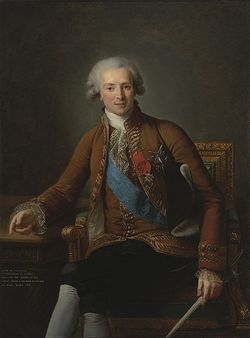 The first Spanish settlement in the "New World" was Fort Navidad, which Columbus used to trade mirrors for gold to native Americans who had just been introduced to vanity. It was also the place where he left 30 of his crewmen before going back to Spain.

When Columbus came back to Hispaniola in late 1493, he founded a new city that he named City of Isabella after his pet rock. He also negotiated with a few Tainos who refused to let their island be taken away from them. After that, a few slaves were introduced and the first colony of the new world was established.

The Spaniards became very obese because they had everything done by their slaves, and thus the women on the island preferred to breed with the Indians and Blacks[This Can't Be True] instead, so the population became racially mixed. Spaniards became so lazy that their biracial and triracial descendants understood that to be lazy is to be civilized, while to work is for savages only. This is a theory widely accepted in the Dominican society, which helps explain why the whole country is currently such a shithole.

After a few disputes with Haiti, Spain and France (yes, they surrendered) the Dominican Republic achieved independence in February 27 of 1844. The independence is largely credited to Juan, Pablo and Duarte, who are considered the god of the nation. Although nobody is exactly sure what they actually did.

In the early 20th century, the United States tried to invade the Dominican Republic, in an attempt to steal its riches. They later found out that Spain had already beaten them to it, so instead they decided to take over another pathetic little island named Puerto Rico. Meanwhile, U.S. Marines stayed in the DR for a while, but were quickly repelled since they were tired of getting constantly defeated at baseball, a recently introduced sport, and being called "Green Goes" which is a term used to show respect to foreigners.

The country vanished from the physical plane in 1930 and reappeared in 1961. Some, such as author Junot Diaz, postulate that this was the work of Chuck Norris's evil Spanish cousin Rafael Leonidas Trujillo. However, this is generally dismissed as subversive propaganda. He managed to get the country going, but after he was assassinated, the US again intervened. They then had democratic elections in which they got to decide who would steal from them for the next 4 years, and then the country went to hell.

The main exports of the Dominican Republic are underpants, crabs, giant crabs, pirate crabs, crab lice, "Just Add Radox," buttplugs, whores, baseball players, and Meringue, which is exported to most pudding-loving nations, including Albumenistan (the place where meringue was originally invented).

The DR also exports drunkenness, drug addiction, and laziness, mainly to the neighborhood of Washington Heights, New York, which Dominican immigrants have transformed into almost as big a cesspool as the DR itself. Washington Heights is easily found by sniffing for the ever-present odors of marijuana smoke, stale beer, and urine; and then listening for random exclamations of "Coño!" coming from the open windows as one gets within earshot. This is especially true in the winter: Dominicans living in cooler parts of the United States routinely open their windows in the winter, and then complain to their landlords about the cold in an attempt to avoid paying rent.

From Washington Heights, Dominican drunkenness, drug addiction, and laziness are distributed nationwide, with the highest concentrations winding up in cities with generous welfare programs and lax immigration policies. 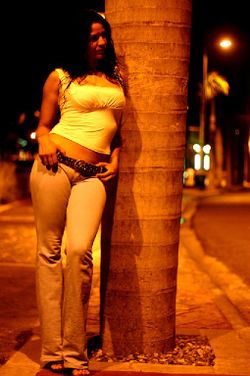 Alas, sexual deviancy is rife on most stretches of the subtropical cities of the DR highlands, where Dominican whores are forced to snort cocaine while being mercilessly humped by fat American tourists who pay millions of pesos (about 20 dollars) to have their way with the slow-moving local wildlife.

Gambling is a way of life in the DR that attracts many nationalities (but mostly Germans) to these shores, who are able to exchange paintings, mirrors & Nazi gold for roulette chips (no questions asked!). Most Executive decisions of the DR government are decided by gambling. 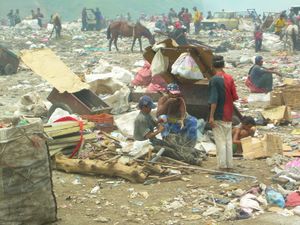 The capital city of the DR is Saint Sunday, which is perhaps one of the finest examples of not really building a city, so much as letting it be created by building where the slums are not. This is probably the reason why the city of Saint Sunday is mostly polluted with lazy Dominicans and dirty Haitians, which renders it unusable by civilized people at the present time.

Questions have been asked in the Sacred Platano Parliament as to whether this was an unfortunate oversight, or should the developers be forced to eat burnt Salami and rice & apply soothing lotions to Leonel Fernandez's anus.

In recent years, advocates for renewed development of the Atom Bomb have suggested Saint Sunday as being the perfect place to test the bomb, since it is believed that due to constant contact with radioactive waste Dominicans have become immune to nuclear weapons.

The official currency of the Dominican Republic is the Almighty Peso, which is almost as worthless as Dominicans themselves. Dollars and Euros are also accepted in major tourist sites (that is if you haven't been robbed by the time you get there). It is also common and acceptable for females (and sometimes males) to barter personal services in lieu of currency.

Ninety-six percent of Dominicans between the ages of 5 and 21 are enrolled in the DR's public education system. Schools are in session year-round, and every school is open on every day that a sufficient number of teachers are sober enough to show up to work. This policy has resulted in an average of six instructional days per year, per school.

All students major in Freeloading, with optional concentrations available in Advanced Alcoholism, Milking the U.S. Welfare System, Sponging off Family and Friends, and Stealing. Minors are available in Shouting, Gambling, Histrionics, and Malingering.

The remaining four percent of Dominicans (those who are able to read) are considered "gifted" and are enrolled in specialized professional programs including Prostitution, Credit Card Fraud, Baseball, and Marijuana Cultivation. 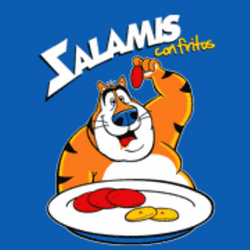 Dominican cuisine is similar to that of other Latin countries, but with some unique delicacies. "Man Goo" is a traditional plate of the DR (particularly enjoyed by women) made by the sacred flesh of platanos, usually eaten with fried salami, eggs or cheese. Many Dominicans also enjoy confle, which is Corn Flakes for non-English-speakers. English-speakers will be surprised to find that Froot Loops (or any other cereal) is also called confle.

For lunch, most Dominicans eat rice with beans and meat, a plate called La Bandera. On special occasions, a stew called Sancocho (Saint cocho) may be cooked; as the name indicates, this dish is just like regular stew, except holy.

Dominicans usually prepare enough food for a week or two every time they cook. They then leave the finished meals in the pot, unrefrigerated, to achieve the desired level of pungency. This not only assures that there will always be food available for family members and guests, but limiting cooking to once every week or two helps free up more time for work, socializing, family time, and other activities.

Dominicans have a unique method of cooking rice. They put the rice and water in a very wide, shallow, aluminum pot, place a plastic bag over the rice, cover the plastic bag with any available cover except the one made for the pot, and then let it cook over a high flame. This results in the rice on the bottom of the pot burning and getting stuck to the pot. Dominicans call this dried-out, burnt rice that they scrape from the pot Concón and consider it a delicacy.

Typical Dominican drinks are Morir Soñando (which literally means "die dreaming" and conjures up pleasant visions of an STD), water, beer, Mama Juana (Mother Jane), Sterno, rum and Hydrogen Bombs. In scientific terms, if it has alcohol, Dominicans will drink it. 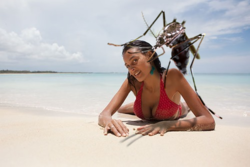 A typical Dominican salute is que lo que, which is translated as "what's the what" and makes as little sense in Spanish as it does in English. Another typical Dominican greeting is to hold a weapon against the other person and courteously asking for his/her money and prized possessions. The greeter merely intends to move them to the closest pawn shop to protect them from robbery. Refusing this salute is rude and has negative social consequences.

Dominicans often refer to each other as tigers (although tigers do serve a purpose in nature) because of how much the species have in common: Both lack the ability to reason, and both prey on weaker species. The roar of a tiger and a Dominican can be heard from more than a mile away, an ability particularly useful for face-to-face conversations. An average tiger eats around six kilos of meat per day, which is the same amount of meat a typical Dominican female will have in her mouth on any given day.

In Dominican vocabulary the word "loan" is used in the same way as other cultures use the word "gift." Because they tend to spend their paychecks on essentials such as booze, drugs, and illicit sex within minutes after cashing them, Dominicans invariably are broke when it comes time to pay for luxuries such as rent, food, and utilities. They will then explain their situation and ask friends and family members to "lend" them some money, which will never be paid back. Indeed, if the lender ever does ask for repayment, they will be considered El Diablo by the recipient.

Dominican society has a unique set of values surrounding sexuality, especially where children are concerned. Little girls are encouraged to perform sexually-explicit dances in front of complete strangers, often while dressed in skimpy, almost see-through clothing. They receive rewards for this activity in the form of applause and tossed coins from the strangers. Hugging or providing a child with any type of affection that might raise self-esteem, however, is considered a form of molestation, and may result in a sentence of incarceration for up to twenty years, with the equivalent in Dominican time being approximately two days.