From Uncyclopedia, the content-free encyclopedia
(Redirected from Underpants)
Jump to navigation Jump to search 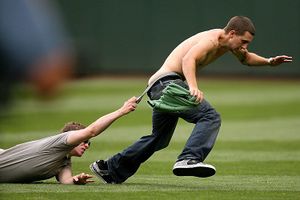 Real use of underwear.

“What the world needs is underwear that will not leave a big poop mark when eaten.”

Welcome to the world of Underwear, they are so cool, you will be gripped. 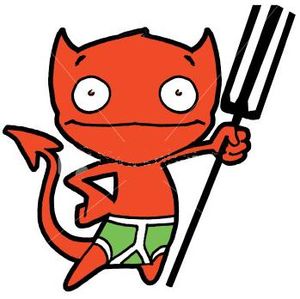 Even the Devil's kids wear underwear 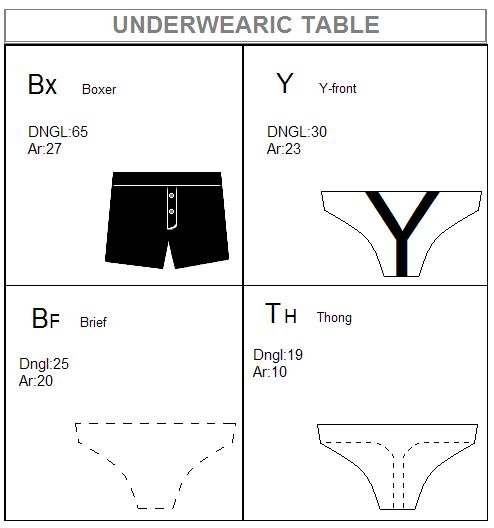 Underwear is so called because it was worn under the skin, as opposed to overwear which was worn on the outside of the skin. Traditional underwear had to be inserted through an orifice, such as the rectum, and moved around until in position. This is opposed to the new "American" way of wearing it, which is by simply swallowing the garments. Simplicity is key. Obviously Nylon became a popular use in most modern underwear due to aforementioned properties. Nylon is able to do this due to the lower density of the fabric, meaning it can fit through the cells of the skin. Other materials are able to do this, one such example being silk, however Nylon is more widely used on account of it's low production cost. These are the steps on how to use underwear if they are currently on your "mountains/valleys and crevices." To use underwear, simply insert your finger into one of the three conveniently-sized holes in the garment. This finger-insertion helps with the comfort and new trendiness of underwear. For the final step, launch your head into a toilet and use the garment which is placed on your finger to dry yourself off of the liquids and solids that was in the toilet before and during launch sequence. CAUTION: USE WITH CAUTION. Another style of the use of underwear is seen below.

Underwear was invented to substitute as a toilet, since Americans are too lazy to get up and go pee. It is a common practice to wet and soil your underwear at least 15 times before changing.

President George W. Bush doesn't wear any underwear although he has been known to give wedgies to any man he finds wearing underwear. Ever. However Condoleezza Rice likes to wear men's boxers. Underwear is especially useful when camping. It also has a great use for being a happy victim of wedgies, making it easier for the assailant to perform this special deed. They come in many colours, sizes, and even edible forms. Flowers and hearts often characterize the underwears, or 'underwie' (plural) of many grown-up men.

For unknown reasons some people have developed a hatred of Nylon, it is believed they are trying to get noticed rather than put across a valid point.

Since the introduction of more convenient nylon underwear a group of people, who call themselves the Old Underwear Crusade, have insisted that traditional cotton underwear are more beneficial to human health. This, however is contradicted by many clinical trials which have found nylon underwear reduces the risk of chafing ten fold. Cult meetings are started by meeting at a not-too-shabby place like the garage of the president's second aunt that is once removed. They start by stretching underwear over their heads and dance to Kool and The Gang while wine is served in underwear-fashioned cups. Many famous people are usually the guest speakers in these meetings. Bill O'Reilly and Tom Kruise, the president for power charis and scooters for the elderly, were some that were featured. Spongebob was almost featured but Squidward was also in that meeting and shot Spongebob in the face so many times, that he died the next day while dead in the morning and died once more the year after on the exact same day. R.I.P. Spongebob who goes on Nickelodean cruises. Anyways, meetings are usually spent by playing ping pong and having sex with a goat which is also covered in underwear. The greetings are as follows:

The normal saying is followed by the code sayings HELLO- The underwear is not too shabby in my pants at the moment. Answer to that: OH HELLO, HOW ARE YOU?- Well my aunt was choked by a thong the other day. Answer to that: I AM GOOD, WELL, GOOD TALK, BYE- My mom makes the greatest underwear cupcakes! Answer to that: OK, SEE YOU LATER- I went on a hike with my boss and co-workers, but they all were killed by bears and unicorns with underwear on their heads.

Notice that all secretive sayings have something to do with underwear. This is necessary because these are to uphold the laws of the Cult.

The ending of all meetings is: MAY THE DOINGER HANG LOOSE AND THE BUTTCRACKS HAVE SOMETHING WEDGED IN THEM!! ALL HAIL!

These people are a group that condemn all types of underwear as unnatural and satanic. These people follow a ritual known as "Going commando" where they refuse to wear underpants. These freeballers have become so large in numbers that they now hold large community gatherings where they burn underpants as a sign of releasing their genitals. Many surveys however have shown that by going commando the person's cleanliness decreases dramatically. Tom Petty even wrote a song about it, entitled Freeballing.

Grues' natural prey are humans, but nylon has the ability to make humans smell unappetising. Grues have to find other food to eat. As a result, killings of humanoids not wearing nylon such as Fredomist and OUC members has exponentially increased.

This was a new revolutionary invention in underwear history. The wiener escape is the front of the underwear that can be opened without the use of a zipper (the use of a zipper caused serious injury, the fear of all men) and is convenient to people who are too lazy to pull down their underpants. Recently modern science has added the wiener escape to pajamas as well. Sadly this escape can cause the showing of the doinger, so use with caution. The wiener escape, (if used properly) is a tool that brings happiness to many people worldwide today. The wiener escape is a passageway to the yellow river, it is also like the "road less traveled." When using the escape, to others, it may look like you are masturbating. Sadly, this is the main reason of gross outs.