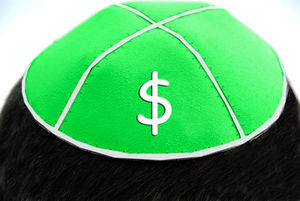 Stereotypes at their best.

Jew Beanies (also referred to as Yid Lids, Kippot, or to the Germans, Targets or Bulls-eye) are the small caps worn by the Jewish people. They are universal in size, but vary by style. Jew Beanie accessories can be bought to adorn your own Jew Beanie with, such activities are often seen as the Jewish alternative to Christmas tree decorating.

Jew Beanies have been worn for thousands of years, and they date back to the pre-Roman Empire. Under the book of Genesis Abraham in the Torah, god commands Abraham "And let mine followers looketh fly. Adorn their heads with stylish hats, which will keep them cool in the great desert. / Not too large, but not too small, they must maketh an impression on passerby's." it is heavily believed that the stylish hats that God referenced in this passage are the equivalent of modern day Jew Beanies.

God continues to discuss the use of Jew Beanies with Moses in the book of Numbers. "Thine journey will begin soon Moses" god whispered in his ear. "Have all mine faithfuls adorned their hats?" Moses replied with a "Yes o great lord." While this passage is very unclear to the definition of 'hats', it is once again believed to be a reference to modern day Jew Beanies.

The Jew Beanie is worn predominantly by men to show their power in Jewish Society. A man first puts his Jew Beanie on when he has completed his first ten years of life. It is a symbol of his maturity, and that he is fertile, and ready to begin rearing little jewlings. It is common practice in the Jewish faith to own more than one Jew Beanie. A vast collection of Jew Beanies shows experience.

Jew Beanies are a staple in any Jewsish male's wardrobe. It is considered bad luck to talk to a Jewish man who is not wearing a Jew Beanie. Also, if you rub their belly and make a wish, it is more likely to come true. Jew Beanies are worn everywhere. At home, at school, at social gatherings, even during sex. Wearing your Jew Beanie during the act of making love is rumored to increase the chance of birthing a boy. 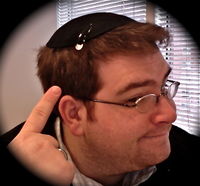 Clearly he is reading your mind right now.

In an unwritten passage in the book of Numbers, God explains to Moses that the hats that his followers are wearing will give them unseen Power that will allow them to survive for the years they will spend in the desert. Moses soon found out that the powers of his Jew Beanie also included X-ray vision, which he was able to keep himself entertained with during the journey.

Magical powers differ from Jew Beanie to Jew Beanie. Some may experience the default cooling powers, which was the specific power addressed by god, to keep them cool in the hot desert, while others may experience a whole slew of powers. X-ray vision, as Moses experienced, mind reading is another common one, as well as super strength and intellect.

A Jew wearing a Jew Beanie must learn how to control his powers, and use them for the good of Judaism, and never let their minds wander off into the prospect of doing evil with their powers. With great power comes great responsibility, and if they cannot handle the responsibility, it is their sworn duty to remove the Jew Beanie, and find a new one which gives them less power. 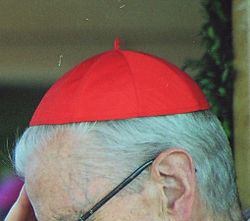 A christian cardinal wearing a rip-off Jew Beanie. Its like they didn't even try to cover up their crime.

With the development of an article of clothing so hip and fly, there are bound to be people who want to steal it away for their own use. Many different religions have stolen the base idea for a Jew Beanie in hopes that no one will notice. High ranking christians wear what they call a 'zucchetto', which literally translates as rip-off in hebrew.

Christianity isn't the only religion guilty of stealing the idea set forth by Jews. Islam stole the Jew Beanies idea as well. It is a Jew Beanie which goes all the way down your head. This blasphemous idea goes against all guidelines set forth by the Torah on how a Jew Beanie should look. Muslims refer to this atrocity as a 'kufi', which in Arabic translates to elongated Jew Beanie, as if it could actually be considered a Jew Beanie in its state.

In fact, the Jew Beanie has taken a different form in most major religions across the world. Christianity, Islam, Zoroastrianism, Buddhism, even the godless Secular beings have a form of the Jew Beanie, and most don't even serve a purpose in their religion.

Impostor Jew Beanies DO NOT give you magical powers.

For those without comedic tastes, the so-called experts at Wikipedia have an article about Jew Beanies.
[ v · t · e ]
( v · t · e )
Fresh Gear