A Yenta is a mythological large white Jewish woman who is said to live in the Arctic during the summer months. A voracious cooker, the Yenta thrives not on blood of the lost, but in the satisfaction of helping two nice people find each other.

Write this in Hebrew and see how a Yenta reacts in a jap way: אתה הגברת יהודי זקן

Strong and powerful, these frighteningly pushy women are known for their herding instincts, which manifests itself in bringing two people together for marriage, mating and the joy of one day being grandparents, God willing, of course, that she should live so long to see the fruits of her labors.

While the polar regions are their favored stomping grounds, as their furs prefer the cold storage that north pole provides, Yentas have been known to visit in West Palm Beach, Florida in winter, which is prime match-making season.

How to spot a Yenta[edit | edit source] 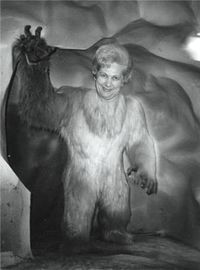 Hey kiddies, its Yenta the Yeti!

Said to stand over six feet high and covered in a floor length white sable coat, the Yenta terrorizes the native population with her match-making efforts. Those who find that her match is a good fit receive her blessings and are never bothered again. Those who do not agree with her choice of mate for them are visited often and have to tolerate her kvetching.

Yenta sightings are most frequent on Friday evenings at Temple, and during the luncheon hour. Yentas can also frequently be spotted driving Cadillacs, and the strength of her powers is directly related to the size of the car. The larger the Cadillac, the more powerful the Yenta.

While it is possible to breed a Yenta, most would prefer it if their mates just rolled over and not bother them, or better yet, sleep in a different room.

Regardless of the power of their wrath and the curse of guilt (oy, the guilt) that they can magically cast, most Yentas can be distracted from whatever their problem is with you if a gift of fine jewellery – an emerald cut diamond, set in platinum works well – is given.

Summer (unlike lizards, they can't survive in temps above 100 degrees F):

Winter (unlike polar bears, they can't survive temps under 50 degrees above F):

In cases where they do reproduce, they often devour the the esteem of their child and nag them until they leave the home, much like a mother bird will push a hatching from a nest. This is followed by complaining about the heartburn that they are suffering from because their children have left the home, and for what?

If they are lucky enough to live long enough to have grandchildren, God willing, the grandchildren are honored and are safe from their massive and powerful jaws. However, there is still a chance of death by having their faces mashed into the Yenta's immense breasts when hugged, leading to suffocation, and/or nagging for drooling on her fur coat.

While they wait for their own Grandchildren, the Yenta plays Rent-a-Yenta by spending her time terrorizing the children and Grandchildren of her extended family members, her neighbors and the general population of Boca Raton.

To do this, she lurks about waiting for a sign of weakness that points to the well of loneliness. Then, quietly she dives in for the kill, approaching he quarry with the seemingly harmless phrase "Whats the matter bubbie?" or "Boychick, why the long face?" If the victim engages the Yenta in conversation, the poor soul is lost and surrenders to her power. The result of which, is that they will be fixed up with a nice girl or nice boy within a matter of days.

If the mating is successful, the Yenta's aura and mystique grows.

If its not successful, well you can't win them all. 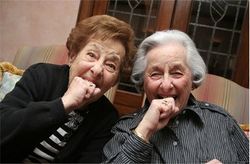 Yenta angst: Oy, vey boychick - stay away from the shiksa!

Due to global warming and the rise in popularity of Internet dating services like www.jewforyou.com and www.jewessseeksjewboy.com the Yenta has been classified as an endangered species. Young Jews prefer the online method, which while hit or miss is available without the nagging and the pushing of the Yenta. To the Yenta, its the nagging and the grief that lends a personal touch to their job.

Nevertheless, the Internet dating is a heartache for the Yenta, and when people like you use it, it's the same as if you are stabbing the Yenta with a thousand knives. So go ahead, cut her heart out, but don't worry about her.

Global warming, global shwarming, the Yenta will adapt to life without her ermine coat. Somehow she'll manage to get by. But the thought of you being caught by a shiksa or a goy will haunt her, knowing that your life has been ruined, but she'll somehow learn to live with that pain as well. No really, it's fine, she won't mind watching you defeat all her expectations and hopes in what ought to be her golden years.