You Don't Mess with the Zohar

From Uncyclopedia, the content-free encyclopedia
(Redirected from Kabbalah)
Jump to navigation Jump to search 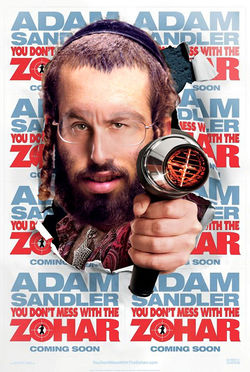 Promotional Poster for the first emanation of the movie.
“These materialistic moneygrabbing schlemiels are giving us a bad name...”

You Don't Mess with the Zohar is a 2008 action movie, staring Adam Kadmon as ex-Mosad agent Moshe ben Shem-Tov (משה בן שם-טוב די-ליאון) who is charged by a secret cabal of Rabbis to attack celebrity "Kaballists". The film was released on 1st August 2008 by Ein Sof Productions.

The movie begins with Moshe (Adam Kadmon), a Mossad agent, on vacation at a Tel Aviv beach, attracting several women and capturing the attention of every beach-goer with his wisdom of the esoteric teachings which define the inner meaning of both the Tanakh (Hebrew Bible), as well as his extensive knowledge of traditional Rabbinic literature. As he finishes a discussion on the Halakha, an Israeli Defense Forces helicopter arrives, stealing him away from his presumed well-earned vacation.

During a subsequent briefing, Moshe agrees to participate in a mission of recapturing a key Hollywood terrorist (known only as "the Madge"). Going undercover, Moshe takes a job at a hairdressing and beauty salon on Santa Monica Boulevard called "The Sexy Sephiroth", frequented by many of Hollywood's leading A and B list celebrities.

Over time Moshe infiltrates the group, attending movie premiers and official book launches. Just as he is about to confront the Madge directly his cover his blown by a former member of the Golden Dawn. Moshe manages to utilise his skills in beating a large number of minnions, confining their eternal souls to the pits of the Qliphoth.

Moshe attacks the Madge in her secret lair, but even his hightened powers prove to be ineffective against the talismanic power of her red string bracelet (available for £29.99 from all good Kaballah Stores). Just as all seems lost Moshe realises that her power only functions within the Malkuth of Asiyah (the World of Action), whereupon he calls upon the Archangelic forces of Beri'ah (the World of Creation) who kick her butt.

Michael: What are you? Bionic?
Moshe: No, I am seeking to achieve the state of Ruach HaKodesh (רוח הקודש) . 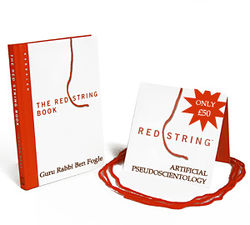 Contemporary Jewish Musak was used in the film because of its easy listening ability and its closeness with the teachings of Zohar mysticism and stark resemblance to a Jewish Mother. The album surprisingly went on to reach #2 on the Jewish Top 40 only one place behind the Zemirots (זמירות) classic tune,"Ruler of the Universe" by Adon Olam. Israeli domestic sales have been jealously coveted, to protect the royalties of and hinder the Jewexploitation of Hasidic Rockers all over the world.

Many celebrity members of the Kaballah Centre have been very vocal in their condemnation of the film. Madonna, Britney Spears, Ashton Kutcher, Demi Moore, and numerous others with no understanding of the expression "cultural misappropriation" have all been scathing in their attacks on the movie. "I am appalled by all this", stated 50 year old former Catholic Madonna in a recent interview, "The way we are being attacked for our beliefs is a travesty. I don't know who these Hasidic rabbinical organizations are, they all look like terrorists to me, but my Guru Rabbi guy, Ben Fogle, says they are worse than Hitler."

For those without comedic tastes, the so-called experts at Wikipedia have an article about You Don't Mess with the Zohar.
Retrieved from "http://en.uncyclopedia.co/w/index.php?title=You_Don%27t_Mess_with_the_Zohar&oldid=6168187"
Categories: