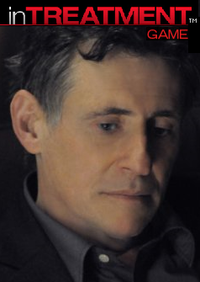 Israeli propaganda can make even Gabriel Byrne, who played Satan in End of Days and Paul Weston in In Treatment, very sleepy.

In Treatment is a third-person shooter video game based on the HBO drama series of the same name. Like the series, the game was developed by the State of Israel to increase the sleepiness among television viewers around the world, in order to fight the Palestinian propaganda machine. The idea for the game was born after the Israelis read in Wikipedia that psychology is the most boring thing in the world - even more than Jewish propaganda. [1]

In light of the increasing Palestinian propaganda regarding Israel being Nazi, Israel has decided to fight fire with fire. Yet when every Israeli attempt to make the Palestinians look bad had failed, they decided to take a different approach and make the television viewers of the world as sleepy as possible, so that the constant Palestinian propaganda will have lesser effect on them. They developed a series in which two people talk to each other for an half an hour, during which almost absolutely nothing else happens. The series became an international hit with many countries creating their own version of the show. Yet Israel has proven to shoot its own leg once again as the Palestinian adaptation premiered, in which one of the patients was suffering of Zyklon B poisoning. Moreover, many Palestinian television critics blamed the show of being too soapy while blaming Israel of "turning Palestinians into soap [fans]".

The Israelis then decided to create a video game based on the show, in which the player is only able to control the cinematographer of the series. As the shooter of the episode, the player is able to shoot any of the characters of the show, whenever he likes. By creating a game which idiotically redefines the concept of third-person shooter, the Israelis tried to show the world the true nature of the Palestinian redefinition of the Nazi concept.

The game is designed for one player who is able to control the cinematographer of some version of the television series In Treatment. Players cannot, however, control the characters of the show, meaning the Gabriel Byrne and his patient. The major challenge is to remain awake throughout all the game's 78 levels. The player is able to shoot any of the characters at any given moment, but then he risks a very special episode at the character's funeral which will take place during the entire next level.